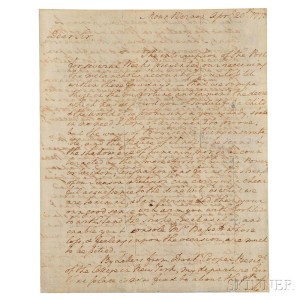 BOSTON, MA – Skinner’s October 30 Fine Books & Manuscripts auction will feature one of the most notable collections of original signed George Washington material to be offered at auction in recent history. The material is diverse, and highlights Washington’s ongoing commitment to nurturing and maintaining Mount Vernon, important moments during the Revolutionary War, and the first Presidency.

A large selection of material from the collection of Chicago’s late David A. Spinney opens the auction at 11AM and includes more than 20 original letters and documents bearing the signature of the first President of the United States. Lots are organized in chronological order allowing collectors and historians the opportunity to view Washington’s career by way of his life’s important highlights. (Lot 1, Estimated between $20,000-25,000) is a survey of land created in 1751 by a teenaged George Washington, who worked as a professional land surveyor between the ages of 17 and 20. The survey is followed by (Lot 2, $20,000-25,000) an important personal letter to Colonel Burwell Bassett Sr. written completely in Washington’s hand in 1773. 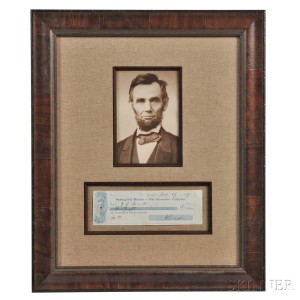 The founding fathers make an appearance as the auction progresses, with documents signed by John Adams, John Quincy Adams, Thomas Jefferson, John Hancock, Alexander Hamilton, James Madison, and James Monroe. History buffs and fans of the hit Broadway musical, Hamilton, will be interested in the 11 lots related to that founding father placed throughout the auction. For example, in (Lot 44, $3,500-4,500) John Quincy Adams writes of his banking report, “On the same principle, in the same paper, and on the same occasion [I] have paid a tribute of Justice to Alexander Hamilton.” 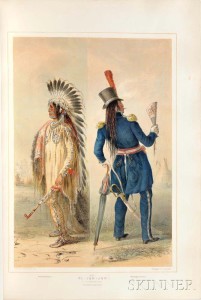 David A. Spinney’s collection continues with a fine and diverse selection of printed and illustrated books. In addition to his interest in the founding fathers, Spinney also collected material related to exploration with a focus on Hawaii, Alaska, Florida, and the American west. The earliest travel book from Spinney’s collection is Theodor deBry’s Brevis Narratio from 1591 (Lot 220, $20,000-30,000), which documents the indigenous population of Northern Florida as they lived in the 16th century.

Additional highlights include, but are not limited to:

Previews, Catalog, Events, and Bidding
Previews for the auction are free and open to the public. Previews will be held in Boston on Friday, October 28 from 12PM – 5PM, Saturday, October 29 from 10AM – 4PM, and on Sunday, October 30 from 9AM – 11AM. Illustrated catalogs for auction 2940B and the George Washington collection are available from the Subscriptions Department at subscriptions@skinnerinc.com or from the Gallery. Prices realized will be available online at www.skinnerinc.com during and after the sale. The Skinner website also enables users to view all lots in the auction, leave bids, order catalogs and bid live, in real-time through SkinnerLive!