BOSTON, MA – November 15, 2013 – Skinner, Inc. announces a stellar auction of 20th Century Design on December 7, celebrating Modernism with fine examples of furniture, art glass, lighting, pottery, metalwork, and sculpture. This highly curated sale will feature a breadth of modern design to complement every taste and interior. Among them: early mosaic glass lighting by Tiffany; iconic furniture designs from Stickley, Wegner, and Eames; studio works by Judy McKie and Thomas Moser; a section of fine art featuring works by Lynda Benglis; and much more.

The Art Nouveau period is represented by several beautiful pieces, including an Inlaid Armchair (Lot 5, estimated between $500 and $700), crafted of oak, with embossed leather and brass accents. This early 20thcentury piece, most likely made in France, features an inlaid landscape scene, characteristic of the nature-inspired designs typical of the Art Nouveau.

For lovers of art glass, a striking Gallé Cameo Vase (Lot 40, $2,000 to $3,000) will be offered, as well as a robust selection of lamps from Tiffany Studios. The auction’s top lot is a Tiffany Studios Dogwood Table Lamp (Lot 101, $60,000 to $70,000), featuring a large shade with the beautifully-crafted mosaic glass work for which Tiffany is famous. Also available is a Tiffany Studios Bamboo Table Lamp (Lot 90, $30,000 to $50,000) with an eye-catching bamboo design throughout, from the shade to the base.

“Inspired by the aesthetic of the Art Nouveau movement in France, Tiffany was a true master at making beautiful glass. Tiffany Studios combined craftsmanship, proprietary formulas, and unique techniques to create works of art in glass and bronze that have not been replicated since. We are pleased to offer these exquisite examples for future generations to enjoy,” observed Jane Prentiss, Director of 20th Century Design at Skinner. 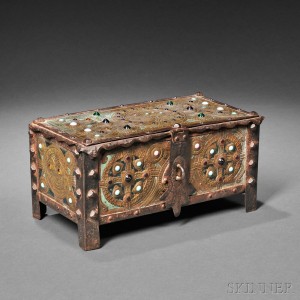 Treasures from this movement, marked by geometric designs and traditional craftsmanship, include a Gustav Stickley Eastwood Table (Lot 85, $2,000 to $3,000), made in New York at the turn of the 20th century. Another fine example is an enameled and glass-encrusted Alfred Daguet Letter Box, France, c. 1905 (Lot 25, $3,000 to $5,000. Decorative pottery, characteristic of the American Arts & Crafts movement, is represented by several exquisite examples, including a Rookwood Pottery Scenic Plaque (Lot 105, $2,500 to $3,500), by Carl Schmidt of Ohio, 1917, featuring a scene of a river at twilight.

An additional highlight from the Arts & Crafts period is a rare Merrimac Pottery Vase (Lot 152, $800 to $1,200). The work is an unusually large, red and green glazed piece from the Newburyport, Massachusetts pottery company which ceased operations when it was destroyed by fire in 1908.

Delightful art deco pieces include a New York Art Deco Desk in the Manner of Ruhlmann (Lot 232, $1,000 to $1,500). This drop-front desk crafted of hardwood veneers features the burlwood veneers characteristic of fine art deco furniture. Skinner will also offer a selection of Lalique glass, including a Rene Lalique Marisa Vase (Lot 247, $2,000 to $3,000), 1927, of mold-blown glass adorned with fish in relief. 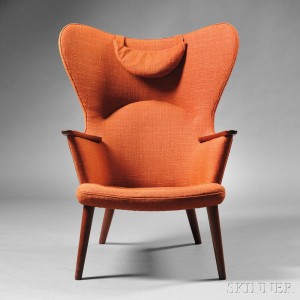 Mid-century modern highlights include several noteworthy pieces by American designers Charles and Ray Eames (Lots 395-400, estimates range from $500-$700 to $2,000-$2,500), consigned by the Estate of Jill Mitchell (Virginia Mills), who was an award-winning textile designer and lifelong friend and colleague of the couple.

Prentiss observed, “The market for Danish furniture is quite robust right now, particularly for designers like Wegner, whose pieces are from the early days of the movement and are often hard to find. Buyers with an eye for color and seeking high quality, durable design will find many possibilities among Skinner’s Danish Mid-century offerings.” 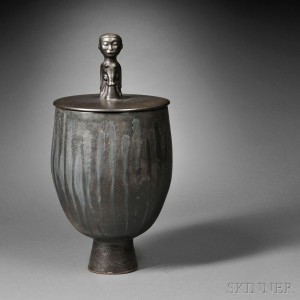 The auction will also feature a selection of beautifully crafted works in wood typical of the Studio Design movement. Fine examples include a collection of Thomas Moser pieces, including a pair of Newport chairs (Lot 513, $500 to $700), simple and sturdy and made of cherry and oak, as well as a finely-carved Judy McKie Sideboard (Lot 518, $8,000 to $10,000), a piece of functional art, constructed of basswood and marble. A pair of sculptured wood golf clubs and bag by Livio De Marchi (Lot 541, $3,000 to $6,000) demonstrates the artist’s meticulous, life-like style of carving.

According to Ms. Prentiss, “Studio furniture is very much in demand now. Museums are also increasingly recognizing the Movement, adding more studio pieces to their permanent collections.”

Among the Studio highlights in other media are several exceptional lots of studio pottery by Edwin and Mary Scheier, including a large Scheier covered vessel, c. 1960, New Hampshire (Lot 493, $4,000 to $6,000), acquired from the artists and passed down through a New England family. 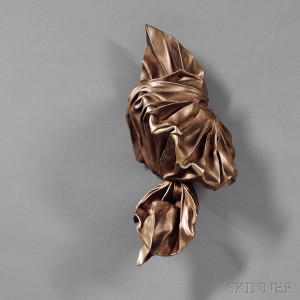 Previews for the auction will be held on Thursday, December 5, from noon to 5 PM and Friday, December 6 from noon to 8 PM. Illustrated Catalog #2692B is available from the Subscription Department, at 508-970-3240, or from the Gallery. Prices realized will be available online at www.skinnerinc.com, both during and after the sale. The Skinner website enables users to view every lot in the auctions, leave bids, order catalogs and bid live, in real-time, through SkinnerLive!