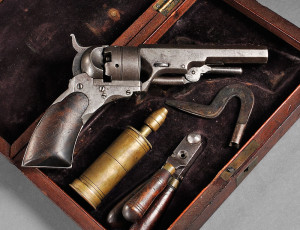 BOSTON, MA – April 7, 2014 – Skinner, Inc. will hold an auction of Historic Arms & Militaria on May 3,2014 preceding its Clocks, Watches & Scientific Instruments auction. Over 300 lots of military antiques from the American Revolution through World War II will be offered, showcasing the collection of Peter F. Frazier and M. Prudence Fleck. An additional selection of over 200 lots of Clocks, Instruments, and Militaria will be offered online only from April 29 through May 6, 2014.

The Collection of Peter F. Frazier and M. Prudence Fleck

The late Peter F. Frazier and M. Prudence Fleck established a small home museum of muskets, swords, uniforms, and relics, almost all related to the American Civil War. The couple began collecting in the 1950s, and Ms. Fleck continued to acquire objects after her husband’s passing in 1982.

A preserved log that contains two artillery rounds purportedly from the battle of Gettysburg (Lot 99, Estimate $1,000-$1,500) stands out as a unique example of the material in this collection. According to records from the Grand Army of the Republic Post 89 in Beverly, Massachusetts, the log was brought back from Little Round Top in Gettysburg in the late 19th century.

“The couple often invited friends, neighbors, and acquaintances from her church to come see the great things in their collection, and to sign a guest book. It was a moving experience to walk around Ms. Fleck’s home museum, and hear the stories of how she acquired these objects,” said Historic Arms & Militaria specialist Joel Bohy. 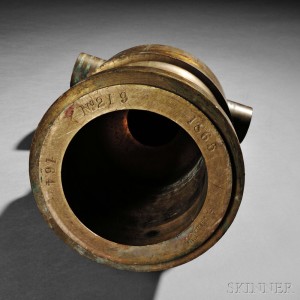 Historic Arms & Militaria auctions at Skinner continue to grow in importance under the direction of specialist Joel Bohy, and this sale is no exception, featuring over 300 lots of historically important or rare military antiques, firearms, blades, uniforms, and artifacts from the American Revolution through World War II.

Artifacts from the American Civil War feature prominently in this auction. Two 24-pound Coehorn mortars (Lots 12 and 13, each estimated at $15,000 to $18,000) come from a private museum in New England. A rare confederate sword (Lot 58, $8,000 to $10,000) in almost perfect condition was recovered from the war by a New Hampshire veteran and has remained in the family ever since.  The wrapping on the grip and paint on the scabbard is all original.

Following on the success of the recent Clocks, Instruments and Militaria – Online auction in March, Skinner is pleased to offer an additional selection of over 200 lots for online bidding opening on April 29, 2014 at 10:00 AM ET. Lots will begin to close on May 6, 2014 at 6:00 PM ET. Collectors can bid at their convenience during these eight days on affordable clocks, watches, scientific instruments, musical boxes, militaria, and a collection of fountain pens. Bidders also have the added value of previewing the online-only lots in person during the regular Marlborough preview hours.

Previews for the auction will be held on Thursday, May 1, from noon to 5 PM, Friday, May 2, from noon to 7 PM., and Saturday, May 3, from 8 AM to 9:30 AM. Robert C. Cheney will present a lecture titled “The Pitfalls of Collecting Willard’s Patent Timepiece or ‘Banjo Clock’” on May 2, 2014 at 6:30 PM. An illustrated catalog for Clocks, Watches & Scientific Instruments and a separate catalog for Historic Arms & Militaria are available from the Subscription Department, at 508-970-3240, or from the Gallery. Prices realized will be available online at www.skinnerinc.com, both during and after the sale. The Skinner website enables users to view every lot in the auctions, leave bids, order catalogs and bid live, in real-time, through SkinnerLive!