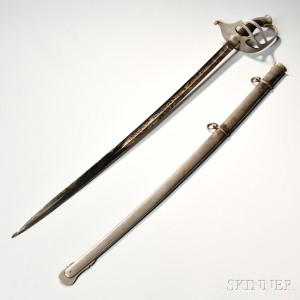 MARLBOROUGH, MA –Skinner, Inc. will hold an auction of Historic Arms & Militaria featuring  pistols and muskets, historic documents, and antique arms from the time of the American Revolution through World War II.  Items on offer include artillery, swords, pistols, powder horns, uniforms, muskets, and rifles.  The online-only sale will begin on April 21, 2016 at noon and will conclude on April 29, 2016 at 10AM; live previews will be held at Skinner’s Marlborough Gallery on Wednesday, April 27 and Thursday, April 28 from noon to 7PM, and on Friday, April 29 from 8AM to 9:30AM.

A selection of early 19th century material on offer is highlighted by Lot 1072, a Pair of Silver Officer’s Epaulets (estimated between $300 and $500). In very good overall condition, the pair is one of several lots being sold to benefit the preservation of the collections of the Danvers Historical Society. 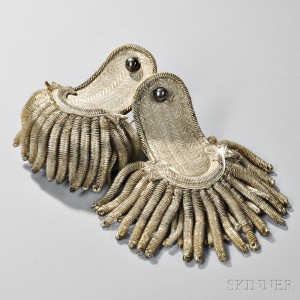 The auction also features a collection of Commonwealth and British tunics and uniform groupings. One of the highlights among the dress jackets, caps, kilts, and other items in this section of the sale is a Universal Service Dress Jacket, 8th Tank Battalion, c. 1915 (Lot 1120, $1,000-$1,500), in very good condition and displaying several badges and service ribbons. 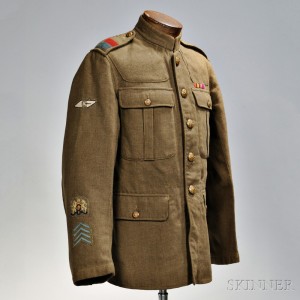 Previews for the auction are free and open to the public. Previews will be held in Marlborough on Wednesday, April 27 and Thursday, April 28 from noon to 7PM, and on Friday, April 29 from 8AM to 9:30AM. Illustrated catalog 2908T is available for download or viewing online. The online-only sale will begin on April 21, 2016 at noon and will conclude on April 29, 2016 at 10AM. Prices realized will be available online at www.skinnerinc.com during and after the sale. The Skinner website also enables users to view all lots in the auction, leave bids, order catalogs and bid live, in real-time through SkinnerLive!

Skinner auctions draw international interest from buyers and consignors alike, with material regularly achieving record prices. The company’s auction and appraisal services focus on fine art, jewelry, furniture, and decorative arts from around the globe, as well as wine, fine musical instruments, rare books, Asian art, clocks, Judaica, and more. Monthly Skinner Discovery auctions feature a breadth of estate material. Widely regarded as one of the most trusted names in the business, Skinner appraisers have appeared on the PBS-TV series, Antiques Roadshow, since the show’s inception. Skinner has galleries in Boston and Marlborough, Massachusetts, as well as in New York City and Miami, Florida, with bidders participating in person, by phone, and online. Join auctions live with SkinnerLive! and Bidsquare. For more information and to read our blog, visit the website at www.skinnerinc.com, find us on Facebook, or follow us on Twitter or Instagram.