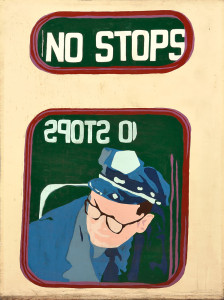 Mary Beams’ Green Line Murals Up for Sale in October

BOSTON, MA – October 16, 2015 –  Skinner, Inc. is pleased to offer a collection of unique Boston-centric murals depicting scenes from inside the Green Line subway station.  This online-only auction, Government Center T Murals online, opens on Tuesday, October 20th and runs through Thursday, October 29th. The murals will be on display for public viewing in the Department of Transportation Building at 10 Park Plaza for the duration of the online auction, from 9AM-5PM. A preview event with artist Mary Beams will be held on October 21st at 6 PM, also at the D.O.T building. This event is free and open to the public.

In 1977, artist Mary Beams was commissioned to paint a series of nineteen 4’ X 8’ panels celebrating the Green Line trolley cars and their riders, painted with a crew of students and installed in the Government Center T station. The murals originally were expected to be on view for about 2 years; however, they were taken down only recently, after 35 years on display, when the T began renovation of the Government Center station.  Mary said, “These were to be up for two years, reminding me that one never knows the extent of impact one’s work may have: murals intended to be temporary, after 35 years in place greeting commuters, have been stored in a warehouse; while the subway stop where they were hung is now completely torn down and being reconstructed.”

Skinner is pleased to offer the murals in this online auction, with the proceeds to be applied toward a new art installation at the renovated station, a sort of lifeblood from one artist to the next.  We are grateful to the staff of the MBTA for their help in organizing this auction and the display of the murals and, of course, to Mary Beams.  The murals are estimated to bring from $800 to $3,000 apiece. 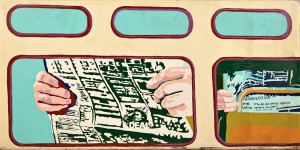 Mary Beams’ personal philosophy for public art is to “put your art where your heart is.” Taking that at face value, Ms. Beams’ heart has been thrumming beneath the streets of Government Center for over three decades.

Originally intended as a temporary installation in 1978, the murals were a project proposed in 1977 by Ms. Beams and completed that fall. Ms. Beams rode the Green Line throughout the summer of 1977 taking photographs and Super-8 video, compiling footage of riders in various states of commuting, lost in thought or conversation. Later, the images were projected onto the panels; the various elements traced in pencil; and then, with the help of volunteers from Harvard, painted using Benjamin Moore house paint. Shortly after their completion and before the panels were hung, Ms. Beams ended her six-year stay as a teaching assistant at Harvard and visiting lecturer at The Carpenter Center for the Visual Arts, moving elsewhere to continue her career.

Not long after the panels were hung, they were covered with Plexiglas to slow the effects of open air and public display. Thus protected, the murals remained in the Government Center station for decades, reflecting past versions of themselves back upon the daily commuters and tourists. Over time the murals became as much a part of the station as the T is of Boston. By the mid-1990s, Ms. Beams had turned away from art and found joy elsewhere, leaving her work in animation and early computer graphics design behind. A few of her other works reside in the archives of The Museum of Modern Arts, with the rest lost to the ages.

Previews for the auction will be held October 20th – 29th, from 9AM to 5PM at the Department of Transportation Building, 10 Park Plaza, Boston. A preview event with artist Mary Beams will be held on October 21st at 6 PM, also at the DOT Building.

Illustrated catalog #2854T is available online. Prices realized will be available at www.skinnerinc.com  after the sale. The Skinner website also enables users to view all lots in the auctions, leave bids, order catalogs and bid live, in real-time through SkinnerLive!