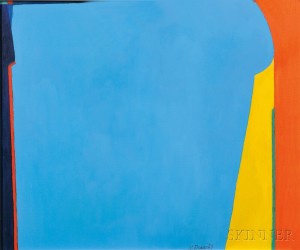 BOSTON, MA – August 26, 2015 – On September 11th, Skinner, Inc. will host two outstanding auctions of American & European Works of Art, beginning at 12PM with a superb range of Fine Prints & Photographs, and followed by an excellent selection of Fine Paintings & Sculpture at 4 PM. An accompanying online-only auction of Fine Art, covering sculpture, prints, paintings, and photographs, will take place from September 2nd through 15th.

New to the market, Vessels in Rough Seas off the Dutch Coast, attributed to Simon Jacobsz de Vlieger and dating to 1628 (Lot 300, estimated $70,000 to $90,000), has descended through at least three generations of the current owner’s Belgian/American family.

Two paintings by a father and his son–Daniel Ridgway Knight’s Young Girl Holding a Puppy (Lot 329, $50,000-$70,000) and Louis Aston Knight’s Old Bridge at Quimperle (Lot 328, $12,000-$18,000)—reflect the father’s Barbizon style, its influence on his son, and the son’s ultimate shift in style through his use of an Impressionist brush stroke. The former work has been in private hands, and the latter is from a corporate collection. 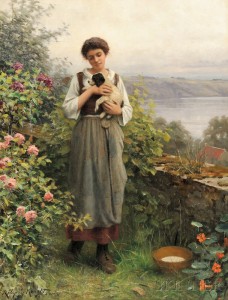 Bathers on a Rocky Shore from c. 1916-19 (Lot 436, $50,000-$70,000) is one of two Maurice Prendergast watercolors featured in the auction. The second lot is a double-sided work, St. Malo (recto) and Girls at a Sailboat Pond (verso) (Lot 407, $25,000-35,000). Both remained in the artist’s family until coming into the current owner/collector’s hands. Prendergast is noted for his use of vibrant color and animated forms to create his enticing views of leisure activities amidst beach and park settings.

Two exceptional ink and watercolor works on paper by Lyonel Feininger, including Ausfahrende Barke (Lot 487, $15,000 -$20,000), come from a private trust. Both are characteristic of the German/American artist’s fusion of expressionist and modernist aesthetics. Also on offer is a whimsical ink drawing titled Ben Hur by Alexander Calder (Lot 485, $10,000-$15,000).

Among the contemporary works on the block is an untitled abstraction by the Lebanese artist Saliba Douaihy (Lot 471, $40,000-$60,000). The painting has been in private hands for several decades and was given to the current owner by his father, who grew up in the same village as the artist. Robert Motherwell’s Night Music Opus #24, 1989 (Lot 477, $40,000-$60,000), a work of acrylic and pasted papers on canvas mounted on board, has also descended from parent to child, though in this case from a mother to her daughter. 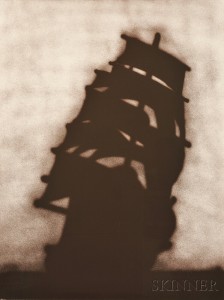 Andy Warhol’s colorful African Elephant (Lot 101, estimated $30,000 to $50,000) is from a 1983 commission to create a portfolio of ten prints of endangered species to raise environmental consciousness. This screenprint, published in an edition of 150 plus proofs, comes from the collection of Citizens Bank, based in Providence, Rhode Island. Crying Girl by Roy Lichtenstein (Lot 78A, $15,000-$20,000) is a classic Pop art icon that exemplifies the artist’s embrace of techniques—like Ben-Day dots—utilized by the illustration and printing industries. 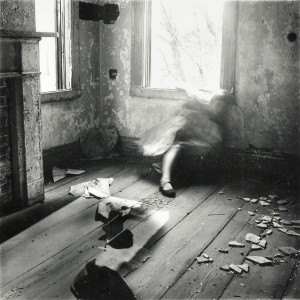 Featured in this sale is a fine selection of photographs by important 20th century masters, including Berenice Abbott, Ruth Bernhard, Harry Callahan, František Drtikol, William Garnett, Josef Koudelka, and Minor White, among others.

Outstanding lots include a vintage pigment print of a nude by the Czech photographer František Drtikol dating from c. 1930 (Lot 108, estimated $12,000 to $18,000). Drtikol experimented with dramatic lighting techniques informed by silent films and Art Deco-inspired settings to create his signature style. Also on the block is a signed and inscribed blue-toned carbon print of The Terra Nova Icebound from Robert Scott’s 1910-11 expedition to the South Pole by Herbert George Ponting, which demonstrates the extremes of the harsh environment encountered by the team (Lot 105, $2,000-$4,000).

Collectors can also bid on over 200 lots at their convenience during Skinner’s Fine Art Online auction, beginning September 2 at 10 AM, with the first lot closing September 15 at 10 AM. A diverse selection of works, ranging from 19th century landscapes to abstract prints to modern photographs, are sure to please collectors of all interests. These online-only lots can be viewed in person during preview hours at Skinner’s Boston Gallery.

Previews for all three sales will be held on Wednesday, September 9, from noon to 5 PM; Thursday, September 10, from noon to 8 PM; and Friday, September 11, from 9 AM to 10 AM. Illustrated catalogs 2840B and 2841B are available from the Subscriptions Department at 508-970-3240. The catalogs are also available at the gallery. Prices realized will be available at www.skinnerinc.com during and after the sale. The Skinner website also enables users to view all lots in the auctions, leave bids, order catalogs and bid live, in real time through SkinnerLive!

Skinner auctions draw international interest from buyers and consignors alike, with material regularly achieving record prices. The company’s auction and appraisal services focus on fine art, jewelry, furniture, and decorative arts from around the globe, as well as wine, fine musical instruments, rare books, Asian art, clocks, Judaica, and more. Monthly Skinner Discovery auctions feature a breadth of estate material. Widely regarded as one of the most trusted names in the business, Skinner appraisers have appeared on the PBS-TV series, Antiques Roadshow, since the show’s inception. Skinner has galleries in Boston and Marlborough, Massachusetts, and offices in New York City and Miami, Florida, with bidders participating in person, by phone, and online. Join auctions live with SkinnerLive! and Bidsquare. For more information and to read our blog, visit the website at www.skinnerinc.com, find us on Facebook, or follow us on Twitter.