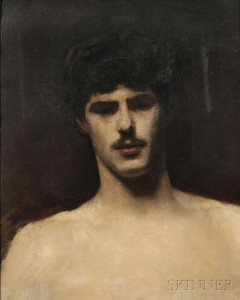 BOSTON, MA – September 2, 2014 – On Friday, September 19, 2014, Skinner, Inc.  will host an exceptional two-part auction, kicking off at 12PM with American & European Prints & Photography, and continuing at 4PM with American & European Works of Art featuring Paintings & Sculpture. The auctions feature a strong selection of paintings, sculpture, prints, photography, and works on paper ranging from the Old Master prints through modern and contemporary offerings. In addition, several standout works will be sold to benefit local institutions.

According to Robin Starr, Director of American & European Works of Art at Skinner, “The September auctions showcase a variety of sought-after material across categories, including several exciting works that have been recently rediscovered.”

A number of fine paintings will make their first appearance on the block on September 19th;  many of these have been in private collections for decades. The auction’s top lot, a Study of a Man’s Head by John Singer Sargent, circa 1878, has been documented in Sargent’s catalogue raisonne (Lot 416, estimated between $200,000 and $300,000). The captivating work had not been seen on the market since 1915, and its location was unknown until now. An Emil Nolde watercolor, Tulpen und Kakteen, (Lot 589, $100,000 to $150,000), was sold through M. Knoedler & Co. in New York in the late 1960s, and is originally from the Nolde Foundation. 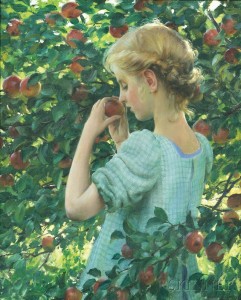 Two beautiful oil-on-canvas works by Charles Courtney Curran both come to the market from the same family collection: Apple Perfume (Lot 558, $50,000 to $70,000), shows a young girl enjoying the scent of a fresh-picked apple, and The Water Gate, depicts elegant strollers at the World’s Columbian Exposition in Chicago in 1893 (Lot 559, $30,000 to $50,000). The magnificent and successful World’s Fair was visited by over 20 million people and proved to be of lasting social and cultural impact.

Carlos Merida’s El Agorero [The Soothsayer], is another outstanding item (Lot 614, $20,000 to $30,000), as is a Diego Rivera watercolor, Portrait of a Woman Holding a Child, possibly The Mexican Mart, signed and dated by the artist in 1934 (Lot 592, $10,000 to $15,000). This painting comes from the Collection of David L. Neumann, who owned a retail store called ‘The Mexican Mart’ in Miami Beach, FL. It is possible that this painting depicts a patron of the store. The lot also includes eight gelatin silver prints, seven of which were taken by photographer Manuel Bravo, who documented the work of Rivera and other Mexican mural painters. One of these images is of the watercolor at auction, and is inscribed to Mr. Newman.

Three oil-on-canvas paintings by the Russian-American artist Mihail Chemiakine (Lots 624 through 626, Estimates vary) will be sold to benefit Brigham and Women’s Hospital in Boston, MA.

Jim Asp, senior vice president and chief development officer at Brigham and Women’s Hospital, says: “The family who donated these works has extended extraordinary generosity to the Brigham over the years, sharing both their love of art and passion for advancing medicine. Their decision to auction some of their favorite works of art to benefit our hospital underscores their commitment to our work and we are exceedingly grateful.” 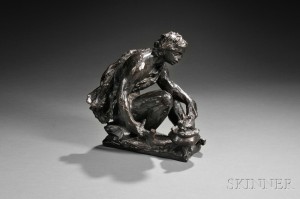 Skinner is pleased to offer works from the collection of James Plaut, founder and first director of the Institute of Contemporary Art, Boston, and director of the group commonly known as the “Monuments Men,” the U.S. Government’s Art Looting Investigation Unit. On the block from this collection are two drawings by German artist Oskar Kokoschka (Lot 529, $2,500 to $3,500 and Lot 591, $2,500 to $3,500). Also sure to excite bidders is a drawing by the Filipino modernist artist, Fernando Zóbel: his 1970 Dibuja, Cuenca (Lot 613, $3,000 to $5,000), comes to Skinner from a consignor with a family connection to the artist.

Sculpture highlights include the bronze Le petit Forgeron, by Pierre-Auguste Renoir and Richard Guino. (Lot 565, $30,000 to $40,000). Alternatively titled Le feu/A Posthumous Cast, the present version in bronze was cast sometime after the creation of the original plaster version in 1916. A plaster of two classical female figures created by Daniel Chester French will be available, as well. Plaster Bas Relief of Muses, circa 1910, arrives from the collection of art and furnishings of Arden Cottage, a summer home in Prince Edward Island, Canada (Lot 549, $3,000 to $5,000). A plaster relief of the same image resides in the casting room at Chesterwood, the home of Daniel Chester French in Stockbridge, MA. 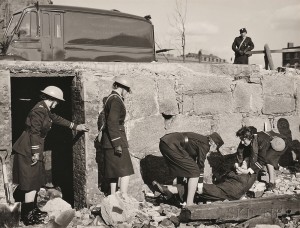 Skinner is pleased to offer a selection of nearly 30 photographs to benefit the Photographic Resource Center at Boston University in order to assist the organization in its goal of furthering the advancement of photographic art (Lots 194 through 220, estimates vary). Many of these images are by local artists with national reputations, including David Hilliard, Olivia Parker, Eugene Richards and more.

Skinner will also spotlight a very rare suite of 57 photographs by Ansel Adams, which document the Massachusetts Women’s Defense Corps (MWDC) around 1942 (Lot 152, $15,000 to $20,000). Departing from his usual landscape work, Adams was commissioned to document the MWDC training during the peak of his career.  Additional photography highlights at auction include a signed image from influential 20th century photographer Harry Callahan, titled Cape Cod, 1972 (Lot 159, $3,000 to $5,000).

Please join Skinner for a reception and Gallery Walk to view highlights from the auction on Thursday, September 18th at 5:30PM. The event is free and open to the public. Please RSVP to 508-970-3240 or events@skinnerinc.com.