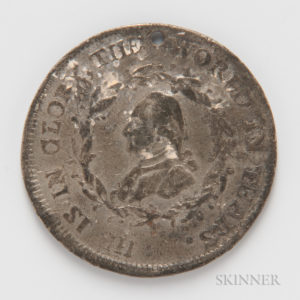 As with all categories of antiques and collectibles, coins and other types of currency appeal to collectors for many reasons: rarity, age, historic significance, artistic merit, personal associations, and investment potential. Good examples of all of these criteria are represented in this auction.

An outstanding opportunity is offered with numerous lots of 1997 25 yuan and 50 yuan gold panda coins. This is an especially desirable year for these widely collected coins from the People’s Republic of China because of the small total mintage of each denomination: 21,909 for the 25 yuan and 15,483 for the 50. 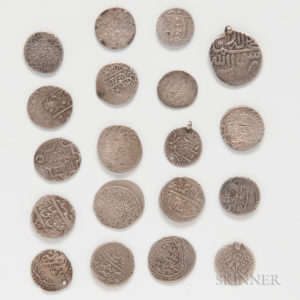 Kyle Johnson, Coins and Currency specialist, comments “To have so many in one collection presents great opportunities for investors and collectors as the price of this issue continues to rise.”

Other auction highlights include examples of American currency that are notable for rarity, beauty, or historical interest; some combine all three qualities.

♦  A 1916 standing Liberty quarter. This was the first year of mintage for this coin, with a total mintage of 52,000, one of the lowest for all 20th century coins. One of the most collected series in the denomination, the renowned design was by Hermon MacNeil, whose sculpture of Justice adorns the pediment of the Supreme Court. (Lot 1138, PCGS VF25, $5,000-7,000). 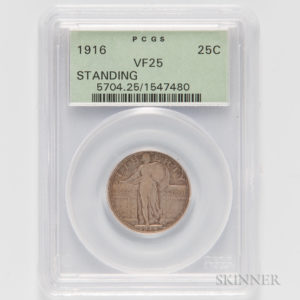 Popular categories of American coins, from Indian Head cents to Liberty head nickels to Morgan dollars, are well represented, including sets, mixed lots and groups that provide ample material for collectors who want to broaden their collections or swap with other numismatic enthusiasts.

Another piece of American history is an 1897 General Society of Mayflower Descendants Commemorative Badge in 14k gold, with original embossed box (Lot 1893, $400-600).

Lots 2025 to 2041 include stamps from all corners of the globe, including first-day covers, postcards, and an album of Italian and Italian colonies’ stamps.

This auction offers collectors at every level an opportunity to acquire history in miniature in an online-only sale format that is convenient and leisurely.

Preview for this auction will be held at Skinner’s Marlborough Gallery on Wednesday, August 22, 12 to 5PM and Thursday, August 23, 12 to 8PM.

The online catalog displays the current bid, asking bid, and time remaining in the auction, in addition to detailed images and condition information. Place a bid for the next bidding increment or place a maximum proxy bid. The system will automatically bid competitively up to that price. Experts are available throughout the auction to answer questions and provide additional information about the lots offered.

Widely regarded as one of the most trusted names in the business, Skinner appraisers have appeared on the PBS-TV series, Antiques Roadshow, since the show’s inception. Skinner has galleries in Boston and Marlborough, Massachusetts, as well as in New York City and Miami, Florida, with bidders participating in person, by phone, and online. Join auctions live with SkinnerLive! and Bidsquare. For more information, visit www.skinnerinc.com, find us on Facebook, or follow us on Twitter and Instagram.