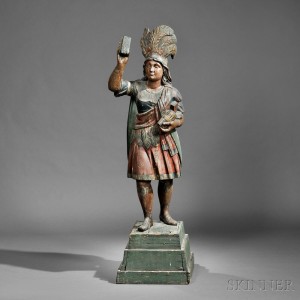 Continuing to present exceptional examples of Americana at auction, Skinner, Inc. is pleased to announce strong results from its August Americana auction.

Earning over $2 million, a compelling selection of American paintings, furniture, weathervanes, folk art carvings, trade signs and more, as well as Part I of the Howard Roth Collection of Early American Iron, offered something for every collector and Americana buff. View highlights from the auction.

A large gathering turned out for the weekend auction, as Stephen Fletcher, Executive Vice President of Skinner, Inc., observed: “It was standing room only in our Marlborough gallery on Sunday morning, and the phones and internet were hopping. The two top lots sold to bidders on SkinnerLive! – we keep investing in our online presence, and it continues to grow.”

Folk art was a huge hit with bidders, demonstrating that the market for rare pieces with original surface continues to perform strongly. The auction’s top lot was a carved Indian princess tobacconist figure by Samuel Robb, which sold for $92,250, more than doubling the low estimate, followed by a carved Punch tobacconist figure ($79,950) and a life-size Black Forest walnut bear ($79,950), all three from a private Wisconsin collection.  Bidding also took off for a quirky, composition figure of a woman with full-body tattoos called “Battleship Kate”.  The scantily-clad statue brought $28,290 – soaring past the pre-sale estimate of $2,000 to $4,000.

Folk art game boards performed extremely well, with a painted Parcheesi board and game board each selling for over $30,000 after heated bidding.  The geometry and color of these works of art appeal to the modern sensibilities of collectors.

The Howard Roth Collection of Early American Iron, Part I, also delighted bidders. From kettles to ladles, these simply-wrought kitchen implements mesh seamlessly with a modern design aesthetic, and achieved robust results across the board.  A rare, bronze posnet marked “NEWPORT 1710” was the top lot in this section, selling for $14,760. Part II of this exceptional grouping – the finest and most comprehensive collection of its kind– is coming to auction at Skinner on October 26, 2014 in Boston.