BOSTON, MA – September 26, 2013 – Skinner, Inc. is pleased to announce robust results from its auction of American & European Works of Art , held last Friday, September 20. The sale brought in a total of $3,224,049.85, including buyer’s premium, demonstrating Skinner’s continued strength in the sale of fine paintings, prints, and photography. 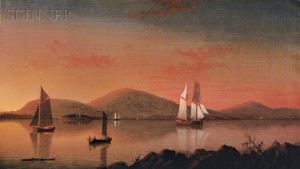 Skinner remains a leader in the sale of works by the American painter and printmaker Fitz Henry Lane. The September 20th auction featured Lane’s Camden Mts. From the Graves, which sold for$1,384,000. In 2004, Skinner achieved a world-record price for the artist, with the sale of Manchester Harbor, for $5,506,000.

“This latest Fitz Henry Lane sold particularly well as it is an exquisite example of the artist’s work. It has the wonderful stillness and luminous quality one expects in a Lane,” observed Robin Starr, Vice President and Director of American & European Works of Art. “We rarely see new works by the artist come up for auction, so this painting was an especially exciting offering.” 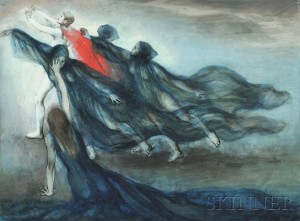 Also performing strongly was the The Robert Bunting Dance Collection, more than 150 lots of paintings, drawings, sculpture, prints, and photography pertaining to ballet and modern dance. The distinguished collection, spanning the 17th century to the present day, had a sell-through rate of 99% (by value), smashing its high estimate. The Jerome Robbins Dance Division of The New York Public Library for the Performing Arts purchased several works from this collection.

According to Robin Starr, “The Bunting Collection was a great opportunity to see a really unique grouping of works. While the circle of people who collect dance-related art is fairly small, they are very passionate about the material, as illustrated by the results of this auction.”

Many of the auction’s top lots came from this single owner collection, including a costume design by Léon Bakst for the marchioness in The Sleeping Beauty, which sold for $66,000, more than quadrupling the pre-sale high estimate. Also performing well was Pavel Tchelitchew’s Group of Dancers in a Scene from L’Errante, which sold for $26,400, well over the $1,500-$2,000 pre-sale estimate; and a poster maquette by Georges De Pogédaïeff for the Ballets Russes de Monte Carlo, which doubled the low estimate, fetching $20,400. 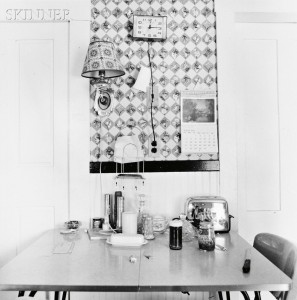 Skinner has been expanding its offerings of prints, multiples, and works on paper and saw excellent results for this material on September 20. Old Master prints had a good showing, highlighted by the sale of Rembrandt van Rijn’s Beggar in a High Cap at $14,400, far exceeding the presale estimate of $800-$1,200. Modern and contemporary works also sold well, including Chuck Close’s Phil I (White), which sold for $60,000. Kandinsky’s Kleine Welten IV more than doubled its high estimate, bringing $15,600.

Photographs by Walker Evans and Aaron Siskind achieved excellent results: Siskind’s Morelia 8 sold for $2,040, while several of Evans’ photographs, including several images of street signs taken in New York City, surpassed pre-sale estimates. As Starr noted, “Skinner is continuing to grow the Fine Photography department and has ‘upped the ante’ with the addition of photography specialist Michelle Lamunière. Michelle, who comes to us from Harvard Art Museums, is already attracting new bidders and consignors for fine photography.”