Spotlighting Fine Silver and Souvenirs of the Grand Tour from the Collection of Thomas S. Holman

BOSTON, MA – March 19, 2014 – On April 5, Skinner, Inc. will host an auction of European Furniture & Decorative Arts, featuring nearly 600 lots of objects from a variety of countries and periods, including fine silver and souvenirs of the Grand Tour from the Collection of Thomas S. Holman. Items range from English furniture to Russian silver and American cut glass to Austrian bronze figures.

According to Stuart Slavid, Director of European Furniture & Decorative Arts, “This auction features a broad range of fine objects representing various styles, time periods, and countries. It offers an excellent assortment of furniture and decorative arts for all collectors and connoisseurs.”

Skinner is pleased to offer approximately 100 lots of souvenirs of the Grand Tour from this private, Manhattan-based collection.

In the 18th and early 19th century, wealthy young Englishmen embarked on lengthy travels to the Continent, known as the Grand Tour. The voyage could last months or even years, and was intended to round out one’s education, which still emphasized a strong knowledge of Classical arts and architecture, languages, history, literature, and philosophy. Later in the 19th century, the advent of rail and steamship travel allowed more middle-class adventurers to continue the tradition of the Grand Tour. 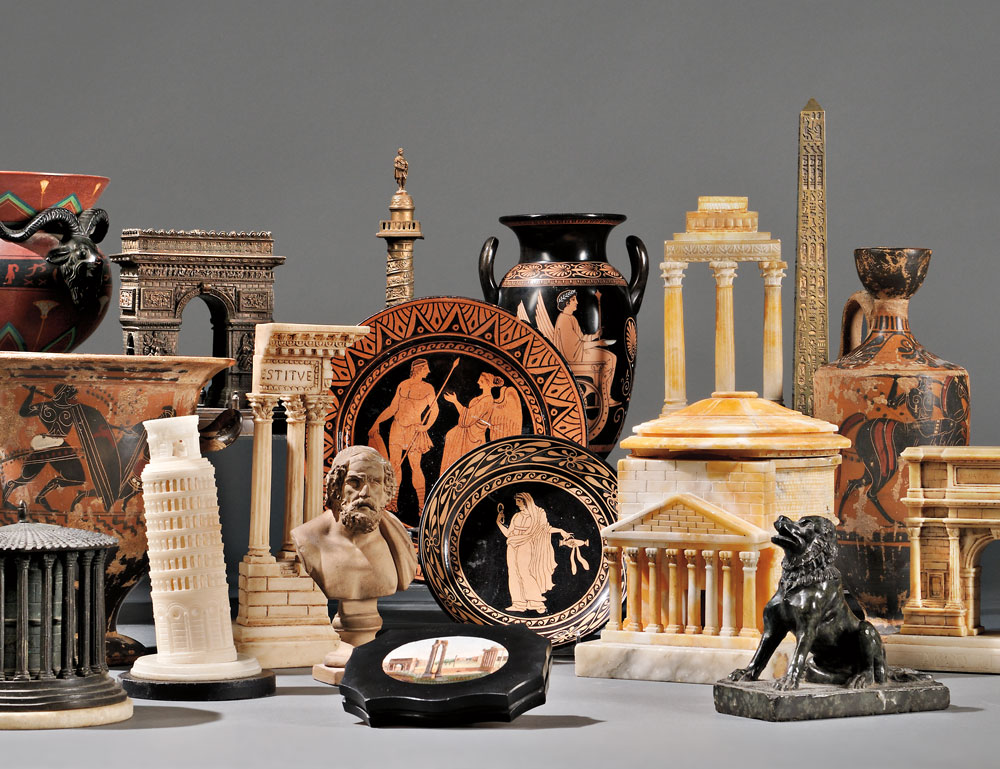 Souvenirs of the Grand Tour from the Collection of Thomas S. Holman

Thomas S. Holman assembled his collection of souvenirs of the Grand Tour over the course of 42 years, beginning at the age of 18. His interest developed from his exposure to the ancient world through childhood trips to London, Paris, and Greece. He studied at Oxford University and the University of Vienna and traveled as an adult to Munich, Berlin, Italy, England, and France. 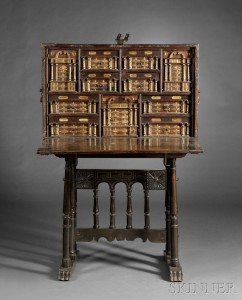 Desirable furniture offerings abound in this sale, including a Spanish Baroque Gilt-metal and Bone-mounted Walnut Vargueno, (Lot 468, $4,000 to $6,000). 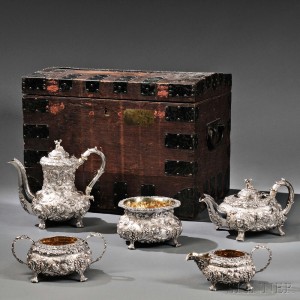 Skinner will offer nearly 200 lots of silver on April 5, including selections from Russia, Austria, England, and the United States.

According to Slavid, “Russian silver is very desirable among collectors right now. We are pleased to offer several exquisite pieces which not only showcase excellent craftsmanship and design, but are also fresh to market.”

From Austria comes a Silver Flatware Service by J.C. Klinkosch (Lot 57, $8,000 to $12,000).  This extensive service, by a highly desirable maker, is in fine condition and comes with its original box.

Examples of American silver span the continent. A Shreve & Co. 14k Golf and Golf Quartz Match Safe from San Francisco, CA, in the late 19th century be available (Lot 105, $800 to $1,200), as well as a group of ecclesiastical items from 20th century including a Gorham Gold-washed Sterling Silver Ciborium (Lot 191, $3,000 to $5,000). These pieces of ecclesiastical silver were individually commissioned by particular members of the clergy or local parishes, making each piece unique.

Previews for the auction will be held on Thursday, April 3, from noon to 5 P.M., and Friday, April 4, from noon to 8 P.M. Illustrated Catalog #2715B is available from the Subscription Department, at 508-970-3240, or from the Gallery. Prices realized will be available online, at www.skinnerinc.com, both during and after the sale. The Skinner website enables users to view every lot in the auctions, leave bids, order catalogs and bid live, in real-time, through SkinnerLive!