BOSTON, MA – December 15, 2013 – Skinner, Inc. is pleased to kick off the 2014 winter season with an exceptional sale of European Furniture & Decorative Arts on January 11. This auction will feature an eclectic assortment of period furniture, fine selections of ceramics and silver, as well as exquisite examples of cameo glass, cut glass, and Spanish Colonial art. 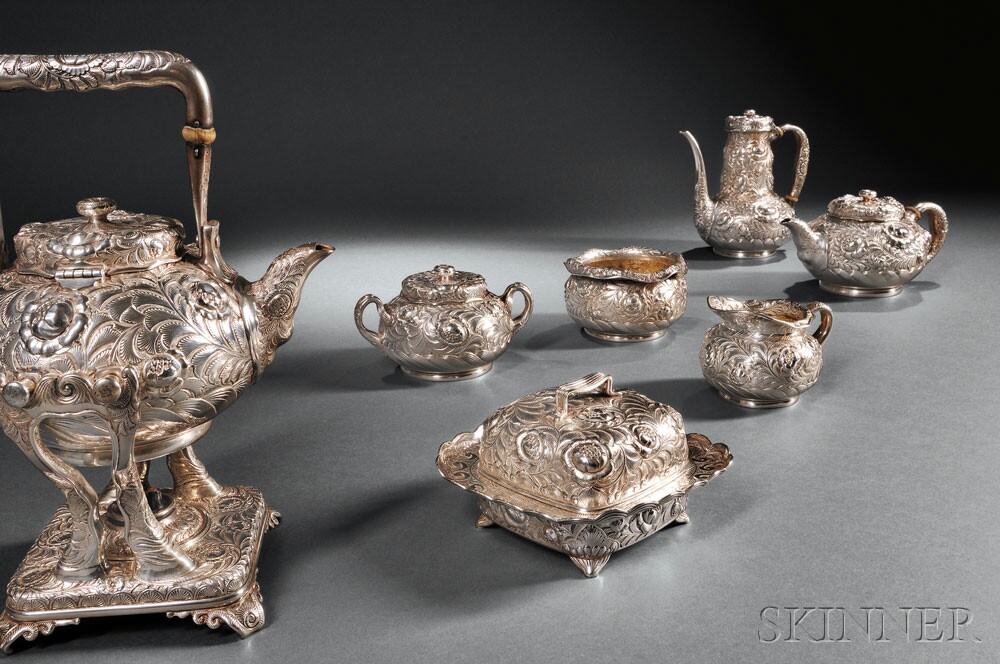 Skinner will offer over 200 lots of silver, with a broad range of flatware and hollowware from the United States, Europe, and Central and South America. The sale will open with over 50 lots of British silver including a fine pair of George III tureens by Thomas Robbins (Lot 17, estimated between $1,000 and $1,500) as well an extensive Art Deco flatware service by Charles Boyton III (Lot 54, $2,000 to $4,000).

A grand selection of silver descended through the prominent Brown family of Rhode Island will be available as well. Part of this collection includes a six-piece Japanese Enameled Silver Tea Service, circa 1900, adorned with decorations of wisteria vines and birds with bamboo-form handles (Lot 98, $1,000 to $1,500). This set appears to have been a Christmas gift, as it is inscribed “S.A.B.S. from I.M.A.S Pasadena California Christmas 1902.” Also available is a six-piece Tiffany & Co. Sterling Silver Tea and Coffee Service, decorated with lobes and stylized flower petals (Lot 126, $3,000 to $5,000). It is also monogramed “SAB” and inscribed, “A Wedding Gift to Sophia Augusta Brown From her Mother October 7th 1885.”

In addition, the January 11 auction will feature over thirty pieces of continental silver, including a small, stand-out collection of highly-prized Russian silver. Highlights include a Pair of Russian .875 Silver Figural Candlesticks from Moscow, circa 1893, (Lot 89, $3,000 to $5,000), as well as an attractive Russian .875 Silver Traveling Tea Service from St. Petersburg, circa 1908, engraved with a crown and monogram (Lot 91, $8,000 to $12,000). 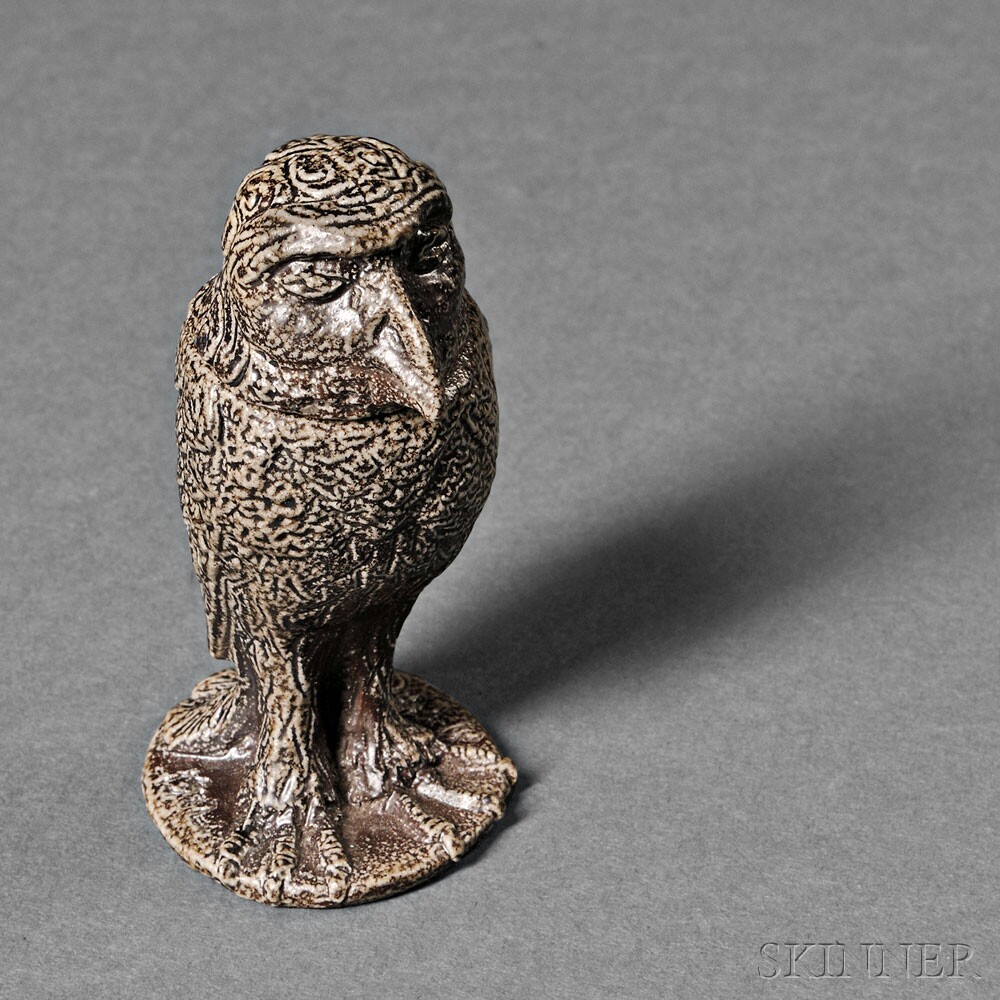 Skinner is pleased to offer an outstanding selection of pottery and porcelain from the 18th through the 20th centuries, with a large focus on English ceramics including Wedgwood from the Jean Mazur Collection of Palm Springs, California, the JoAnn Portz Collection of Waukesha, Wisconsin, and a private Vermont collector. Among these works is a strong collection of Fairyland Lustre, prized for its bold, bright and fanciful designs.

Stuart Slavid, Director of European Furniture & Decorative Arts, said: “Fairyland Lustre ceramics are some of the most desirable items in this sale and are incredibly popular among Wedgwood collectors.” These stellar offerings include a Wedgwood Fairyland Lustre Vase, circa 1920, depicting the Christian feast of Candlemas, with a blue rim border of goblins climbing a bell rope (Lot 366, $4,000 to $6,000) and a Wedgwood Fairyland Lustre Torches Vase, circa 1920, featuring a painted flame sky and Flaming Wheel border at its base (Lot 368, $3,000 to $5,000).

Wedgwood collectors will also be pleased to find a wide selection of jasper in a variety of colors, ranging from a light blue jasper Michelangelo vase to a black and white jasper canopic jar and cover and a full size dark blue jasper Portland vase. A wide assortment of black basalt busts, figures and table wares will also be available. Other ceramics highlights include fine 18th century saltglaze and tortoiseshell wares, English parian, majolica, and a Mintons Henry Deux ware wine pitcher designed by Charles Toft, Senior (Lot 253, $1,000 to $1,500).

A Miniature Stoneware Wally Bird Jar and Cover, circa 1902, by the highly sought-after Martin Brothers is an important example of 20th century pottery (Lot 260, $6,000 to $8,000). This item will be offered on the heels of Skinner’s July auction of European Furniture and Decorative Arts, in which a Martin Brothers Stoneware Humidor – modeled as two birds standing in an amorous pose – sold well over its pre-sale estimate for a total of $57,000. 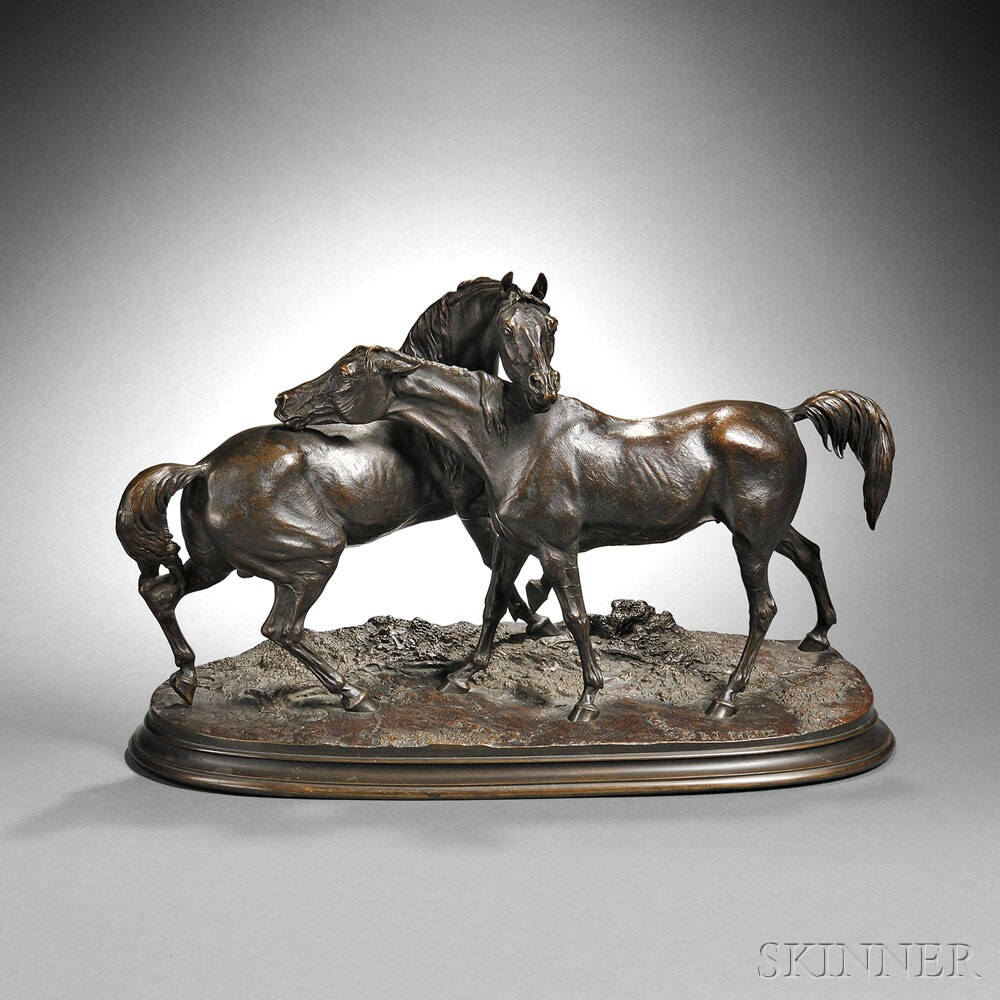 An exceptional selection of furniture includes a lovely American Renaissance Revival Marquetry and Parcel-gift Center Table, adorned with an inlaid, bucolic scene of a couple surrounded by foliate scrolls on a rosewood ground (Lot 635, $1,200 to $1,800). English furniture comprises nearly half of the items in this section, with such notable offerings as a George I-style Japanese Bureau Cabinet (Lot 552, $2,000 to $3,000).

Slavid observed, “The January auction is a great introduction for new collectors looking to purchase quality, antique furniture. Not only are the pieces beautiful and diverse, they are also affordable.”

Decorative arts highlights include a bronze cast of two horses, L’Accolade, by the desirable French sculptor Pierre Jules Mene (Lot 422, $3,000 to $5,000), as well as a whimsical Pair of Italian Baroque-style Carved, Painted and Gilded Wood Blackamoore Candlesticks from Venice (Lot 491, $3,000 to $5,000), each with a figure standing on a gondola stern, holding a sconce above his head with one hand, while the other grasps an oar.

Fine examples of glasswork are a highlight of this sale, including an important collection of American cut glass. Among the items are a late 19th century Emerald Green Vase decorated with flowerheads and foliage (Lot 527, $500 to $700). Plentiful English cameo glass offerings include a Stevens and Williams vase in white cameo with leafy flowers in various stages of bloom (Lot 475, $2,000 to $4,000). 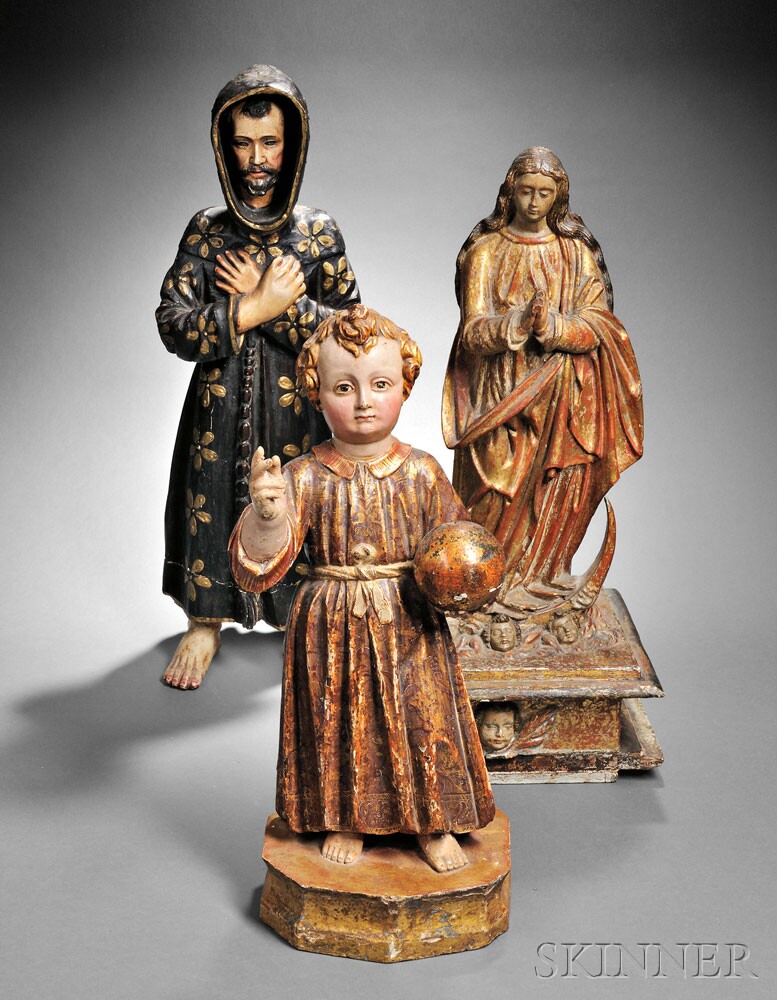 Approximately 40 lots of Spanish Colonial items will be offered in this sale, including a beautiful, late 18th century Spanish Colonial Embossed and Polychrome-painted Leather Trunk (Lot 588, $5,000 to $7,000), adorned with two painted monkeys, star-shaped studs, and featuring wrought-iron hardware. Other Spanish Colonial furniture highlights include a Chased Repousse-decorated Silver Mirror, framed by scrolling foliage, flowerheads and a leaf-tip border (Lot 733, $5,000 to $7,000).

Silver is also featured as part of this collection, highlighted by the Three Silver Santos Figure Crowns, (Lot 100, $500 to $700) and a Spanish Colonial Silver Horse Bridle, decorated with stylized foliage and applied birds (Lot 99, $1,000 to $1,500).

Previews for the auction will be held on Thursday, January 9, from noon to 5 P.M., and Friday, January 10, from noon to 8 P.M. Illustrated Catalog #2698B is available from the Subscription Department, at 508-970-3240, or from the Gallery. Prices realized will be available online, at www.skinnerinc.com, both during and after the sale. The Skinner website enables users to view every lot in the auctions, leave bids, order catalogs and bid live, in real-time, through SkinnerLive!