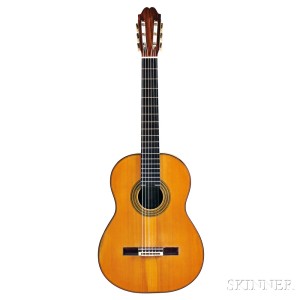 Leading a selection of antique and vintage mandolins, banjos and guitars is a fine Classical Guitar by Robert Bouchet (Lot 26, estimated between $40,000 and $60,000), from the estate of noted Mexican classical guitarist Mario Beltrán del Río. One of roughly 150 instruments completed by Bouchet, this late example presents a rare opportunity to the professional player and collector alike to acquire an exquisite icon of the luthier’s craft. Also on offer is a rare and desirable 1941 C.F. Martin & Co. D-45 guitar (Lot 23, $30,000-$40,000). 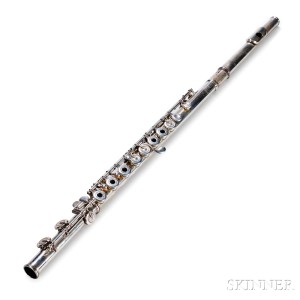 Sure to excite is the homecoming of two historic silver wind instruments by two of Boston’s premiere makers. The first, American Silver Flute #201 by Verne Q. Powell, Boston, 1933 (Lot 37, $8,000-$12,000), was owned by William Morris “Monty” Kincaid, considered the Grandfather of the American Flute School. In 1939 Kincaid, who favored Powell instruments,  also purchased a platinum example (#365) which had been made for display at the New York World’s Fair; that instrument sold at auction for $187,000 in 1989.

An American Keyed Bugle by Henry Sibley, Boston, 1840 (Lot 38, $12,000-$16,000) has even closer ties to the New England. Engraved “Edward Kendall” on the bell, it was owned by bandleader Edward “Ned” Kendall. The leader of the Boston Brass Band, Kendall was considered one of the virtuosos of this short-lived antecedent to the valved cornet; his well-documented 1856 “duel” with cornetist and band leader Patrick Gilmore of Salem, MA was both one of the highlights of Kendall’s career and a turning point for musicians away from the bugle and toward the less complex cornet. 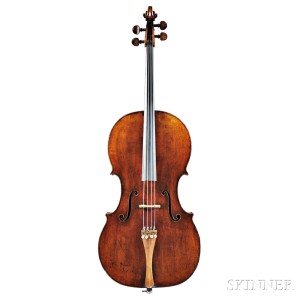 Please join Skinner on Friday, May 20 at 6PM for a Classical Salon featuring The Yaeko Miranda Elmaleh Group. This event is free and open to the public, and refreshments will be served, but space is limited. Please RSVP to  events@skinnerinc.com.

Illustrated catalog #2892B is available from the Subscription Department, at 508-970-3240, or from the Gallery. Prices realized will be available online, at www.skinnerinc.com, both during and after the sale. The Skinner website enables users to view every lot in the auctions, leave bids, order catalogs and bid live, in real-time, through SkinnerLive!