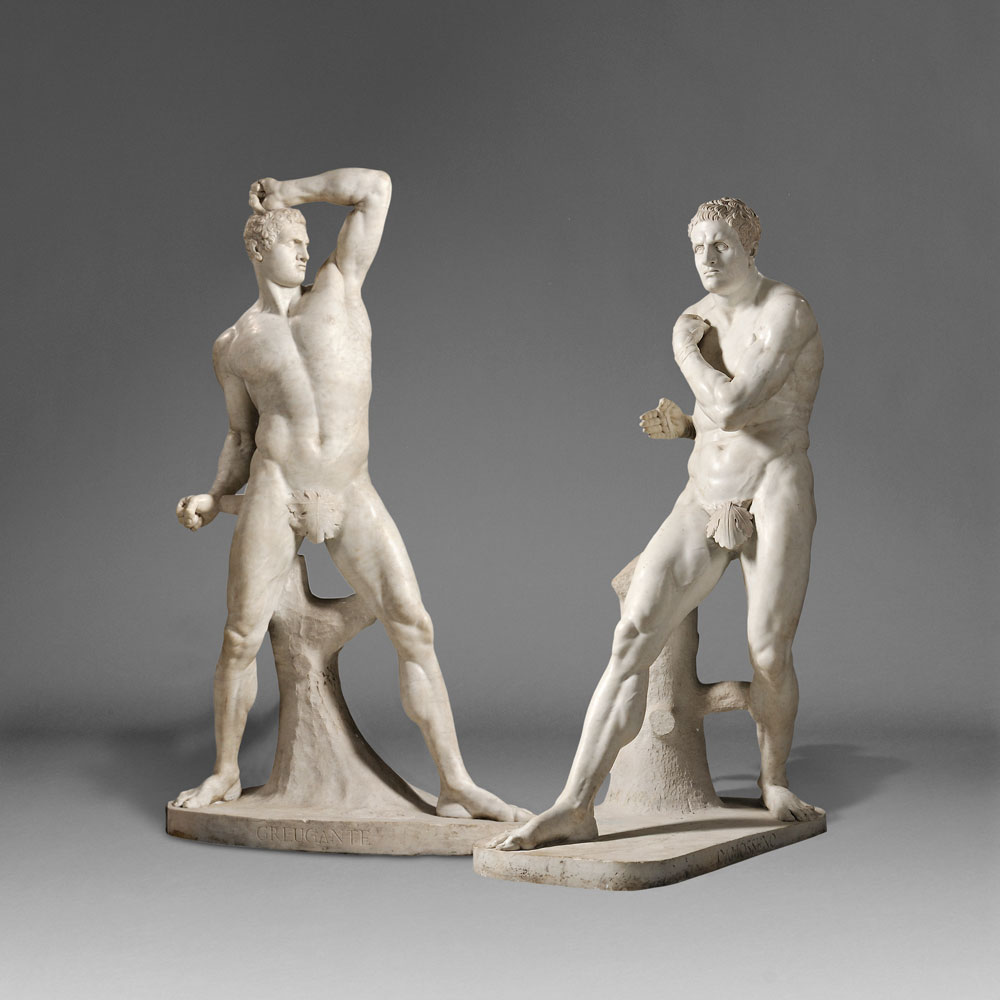 A stellar collection of 19th Century Marble Sculpture at auction on July 19th offers larger-than-life appeal, highlighted by an important pair of seven-foot-tall Carrara marble figures of pugilists after Antonio Canova, signed “Morelli e Rinaldi” (Lot 246, estimated between  $70,000 and $90,000). Another pair of the same stature, by the same makers, can be found at the Olympic Club in San Francisco. These monumental works in a classical style are just one example from a private Midwest collection which also includes a variety of high-quality, portrait busts depicting historical figures such as George Washington (Lot 272, $7,000 to $9,000), Napoleon (Lot 274, $2,000 to $4,000), Seneca (Lot 266, $2,500 to $3,500) and more.

Skinner will also spotlight nearly 50 lots of ornate Viennese Table Clocks from a private Southern collection. These eye-catching European clocks date from the last quarter of the 19th century and are sure to please for their handiwork and sheer decorative quality. Most are silver-gilt and enameled, mounted with precious and semi-precious gemstones, hardstones, and pearls.

Fine Silver from around the world will be presented at auction, including American, English, Continental, Russian, South American, Mexican, and Asian silver. The section’s top lot is a Russian .875 Silver and Hardstone mounted Kovsh (Lot 63, $20,000 to $30,000), depicting Boyan, a popular figure with Russian Romantic artists. Tiffany & Co. is represented by several noteworthy offerings, including a Sterling Silver Epergne (Lot 81, $15,000 to $20,000) and an Olympian Pattern Sterling Silver Flatware Service (Lot 126, $10,000 to $15,000). A five-piece Georg Jensen Sterling Silver Tea and Coffee Service with the accompanying silver tray and tea strainer, with stand (Lot 57, $8,000 to $12,000) is also available. Collectors will enjoy a limited edition set of silver chess pieces representing figures from the American Revolution (Lot 32, $5,000 to $7,000). The Liberty set, made by the English silversmith James Goodbrand in 1973, arrives from the private Midwest collection referenced above. 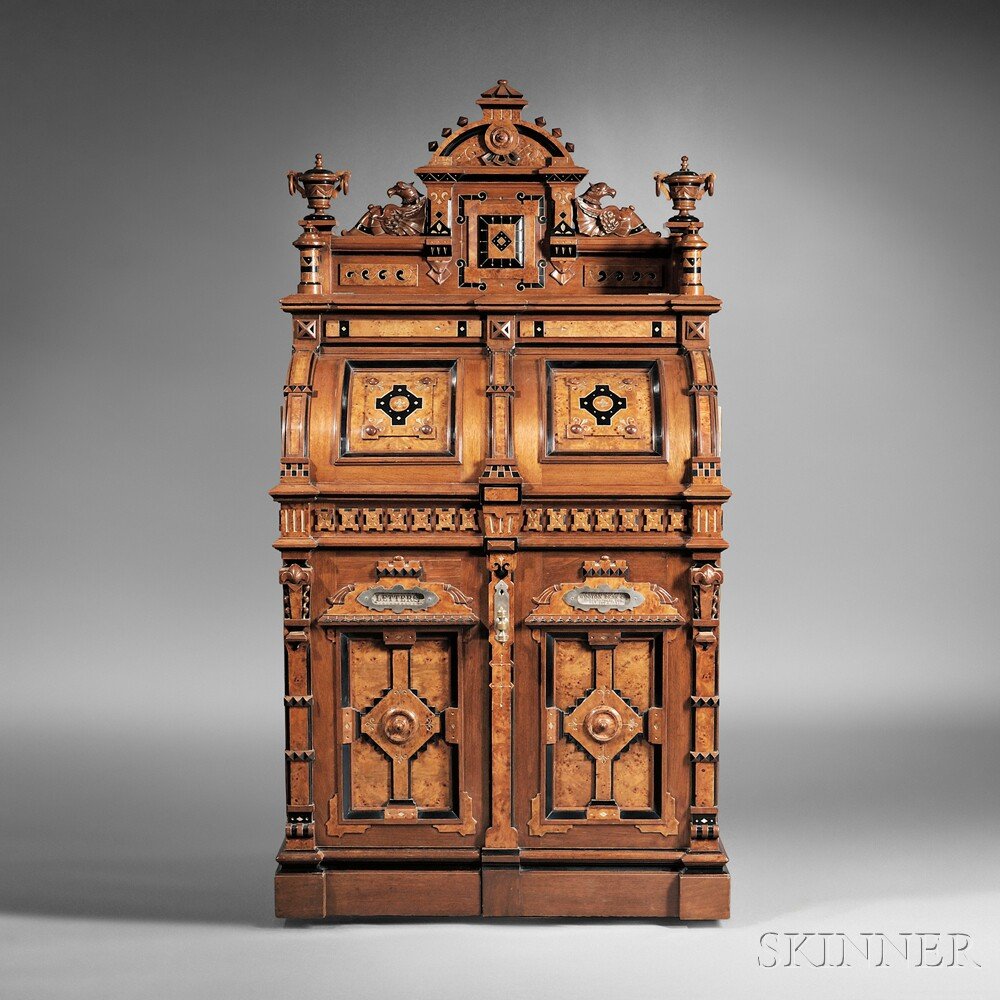 Leading a strong section of furniture are two exceptional cabinet secretary desks, including a Superior Grade Wooton Renaissance Revival Cabinet Secretary (Lot 319, $20,000 to $40,000), made by the Indianapolis-based company in the late 19th century. Another highlight from the American Victorian period is Joseph Moore’s Office Queen Cabinet Secretary (Lot 366, $20,000 to $40,000). Moore was the general manager of Wooton Manufacturing Co. in 1876, but by 1878 he had patented his own “Cabinet Desk” and began working in direct competition with Wooton. According to Stuart Slavid, Director of European Furniture & Decorative Arts at Skinner, “Both of these cabinet secretary desks represent the top of the line from their era. The sophisticated craftsmanship evident in each – as well as their scarcity – makes these desks extremely collectible.” An Oak Tall Clock, retailed by H. Muhr’s & Sons, Philadelphia (Lot 327, $5,000 to $7,000) and seven-piece walnut parlor suite, in the manner of John Jelliff, including two armchairs, four side chairs, and a settee (Lot 335, $8,000 to $12,000), round out the selection of American Victorian furniture. This section also features a variety of furniture styles from England and Europe, including an Italian Pietra Dura and Pietra Paesina-inlaid Walnut Table Cabinet inlaid with fossils (Lot 515, $4,000 to $6,000).

Skinner will present over 30 lots of porcelain figures by Meissen, including two offerings of the German maker’s iconic Monkey Band Figures (Lot 701, $10,000 to $15,000 and Lot 605, $10,000 to $15,000). According to Stuart Slavid, “Meissen represents the height of German porcelain. The Monkey Band offerings at auction on July 19th are particularly desirable, as it’s quite rare to see these figures in such large groupings. Wedgwood also features prominently in this auction, with nearly 50 lots representing the variety of wares produced by the English maker spanning 250 years of production. Additional English works include a highly desirable Aesthetic teapot by Royal Worcester designed by R.W. Binns in the spirit of Oscar Wilde. This whimsical piece is molded with a mustachioed dandy on one side and his female companion on the reverse. (Lot 514, $7,000 to $9,000). Another standout offering of Royal Worcester porcelain are a pair of ewers hand-painted by Harry Davis, (Lot 505, $1,200 to $1,800). Skinner will also feature a Martin Brothers Miniature Stoneware Wally Bird Jar and Cover (Lot 526, $5,000 to $7,000) – a sought-after piece, as miniature ceramics by the maker are often hard to come by. Another exceptional offering is a cased presentation of the Kings of France, featuring 74 commemorative medallions depicting French rulers (Lot 650, $2,000 to $4,000).

Previews are free and open to the public, and will be held on Thursday, July 17, from noon to 5 PM, and Friday, July 18, from noon to 8 PM. Lot 246, a pair of Carrara Marble Figures of the Pugilists after Antonio Canova, is available for preview in Marlborough, MA by appointment only. Illustrated catalogs are available from the Subscription Department, at 508-970-3240, or from the Gallery. Prices realized will be available online at www.skinnerinc.com both during and after the sale. The Skinner website enables users to view every lot in the auction, leave bids, order catalogs and bid live, in real-time, through SkinnerLive!