BOSTON, Mass. – September 5, 2013 – Skinner, Inc. will host an auction of Fine Jewelry in its Boston gallery on Tuesday, September 10th. The sale will feature over 600 lots of antique and period jewelry, as well as contemporary jewelry by famous makers including Tiffany, Cartier, Buccellati, and Van Cleef & Arpels. 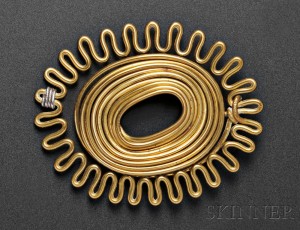 Skinner is pleased to offer a pin by American sculptor Alexander Calder (lot 672, estimated at $20,000 to $30,000) accompanied by an original letter from the artist to Henry Sayles Francis, the original owner of the piece. The brass coil pin was commissioned by Francis, curator of prints and paintings at the Cleveland Museum of Art from 1930-1970, for his wife, Frances M. Francis. In the accompanying signed letter dated December 18, 1939, Calder inquires as to whether Francis received the pin and if he found it satisfactory. The Calder Foundation assigned this pin application no. A26064 in July 2013.

A selection of eclectic jewelry by Noma Copley from the collection of Jean Stark, co-founder of the Kulicke-Stark Academy of Jewelry Art in New York City, includes a realistically designed hammered silver gentleman’s necktie (lot 666, $800 to $1,200), an 18kt gold “screw” ring (lot 667, $1,500 to $2,000), and an 18kt gold bangle cast from a key belonging to the artist (lot 669, $1,500 to $2,000). Noma Copley (1916-2006) had no formal training in metalsmithing and did not begin making jewelry until she was fifty years old. Of her work, Copley stated, “Surrealist inspired and influenced I, for a long time, tried to transform the everyday, the common objects that are taken for granted into poetry to wear.” 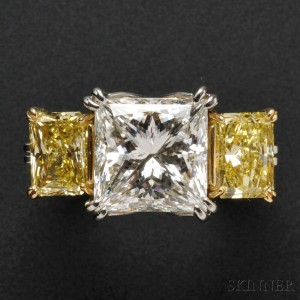 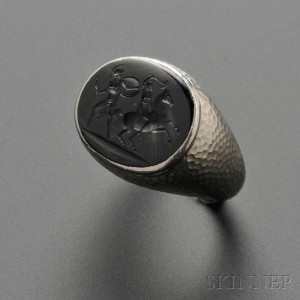 An Art Deco platinum and green sapphire intaglio ring once belonging to Rudolph Valentino will be available (lot 369, $5,000 to $7,000). Currently the property of The Strong, Rochester, New York, the ring will be sold to benefit the collections fund. Rudolph Valentino (1895-1926), the original “sex symbol” of film from the 1920s, was known for his love of fine clothes and jewelry, and his signature slicked-back hair. This ring was worn in the 1925 silent film The Eagle, in which Valentino plays a Russian army lieutenant seduced by Czarina Catherine II, played by Louise Dresser. 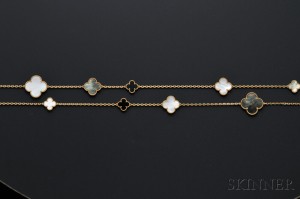 An illustrated catalog for #2671B is available by mail from the subscription department at 508-970-3240. It is also available at the gallery.