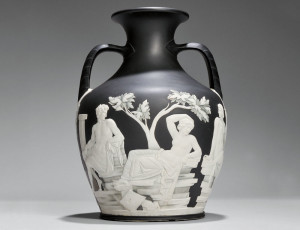 MARLBOROUGH, MA – Skinner, Inc. will present a summer auction of European Furniture & Decorative Arts in its Marlborough Gallery on Friday, July 15 at 10AM. With over 750 lots on offer, the auction will feature Part II of the Troy Dawson Chappell Collection of 17th and 18th century English Pottery and Part I of the Paul Lauer Collection of Wedgwood, as well as an expansive selection of fine silver and European fine and decorative arts of the 16th through early 20th centuries.

The standout lot of the auction is a Wedgwood numbered first edition copy of the Portland Vase from the Paul Lauer Collection (Lot 365, $40,000-$60,000). Wedgwood’s oven book records list forty-three of these “first edition” vases fired between 1791 and 1796. Eleven were broken during the process, and the numbers of additional faulty vases are not known. It’s generally believed that somewhere around thirty of these black jasper vases were of first quality. Most, if not all, of these remaining vases bear a number inside the rim inscribed with manganese pencil. Paul Lauer purchased the number 22 first edition Portland vase at Sotheby & Co., London as Lot 112 of the Oster Collection catalog, November 30, 1971. 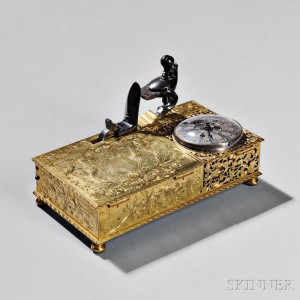 The day opens with over 200 lots of fine silver, featuring numerous lots from the Estate of Hugh Trumbull Adams to benefit The Colonial Williamsburg Foundation. Highlights from the Estate are exemplified by a magnificent pair of George III sauce tureens by Benjamin Smith II & Benjamin Smith III  modeled after the Warwick Vase (Lot 34, estimated between $8,000 and $12,000), as well as a pair of French silver-gilt chargers bearing the coat of arms of Prince Camillo Borghese and Pauline Bonaparte (Lot 58, $1,000-$1,500).

The auction features two collections of English ceramics: Part II of the Troy Chappell Collection of 17th and 18th century English pottery, and Part I of the Paul Lauer Collection of Wedgwood.

In addition to the first edition Portland Vase, highlights of the Paul Lauer Collection include, a black jasper dip Apotheosis of Virgil vase and cover (Lot 392, $5,000-$7,000), and a monumental Adams dark blue jasper dip vase with cover and pedestal (Lot 418, $3,000-$5,000.) Several other Portland vases in a variety of colors and bodies are also included, as are a number of large plaques in both jasper and black basalt. 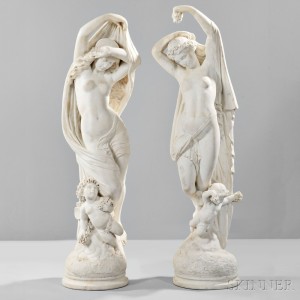 Works by Emile Lessore were a favorite of Mr. Lauer, and his collection includes several plaques, oil paintings and watercolors executed by the 19th century artist, as well as a grouping of table wares. The collection is diverse and includes several black basalt portrait busts, a nice assortment of majolica in Wedgwood and Minton, as well as carrara and Minton parian groups. Also offered will be a fine selection of Mettlach pottery including table wares and several large plaques; a pair of phanolith plaques with mythological figures in relief (Lot 478, $1,200-$1,800); as well as a nice selection of Sarreguemines majolica including a “Coupe Sandier”(Lot 484, $3,000-$5,000), and Lot 489, a pair of covered floor vases on pedestal bases ($4,000-$6,000). Part II of the Lauer Collection will be offered as part of our European Furniture & Decorative Arts auction on October 7.

Offerings featured in the general section of the auction include numerous deaccessioned items from Colonial Williamsburg from which the proceeds will be used by the Colonial Williamsburg Foundation, exclusively for the acquisition of art and antiques to be exhibited in its art museums and historic buildings. Highlights from this collection include a rare brass Flintlock Alarm Candle Clock, with movement signed “Vincent Des Combes, Schleswig,” c. 1745, (Lot 547, $20,000-$40,000), and a selection of over ten lots of English pewter.

Previews for the auction are free and open to the public. Previews will be held in Marlborough on Wednesday, July 13 from 12PM – 5PM and on Thursday, July 14 from 12PM – 8PM. Illustrated catalog 2920M is available from the Subscriptions Department at subscriptions@skinnerinc.com or from the Gallery. Prices realized will be available online at www.skinnerinc.com during and after the sale. The Skinner website also enables users to view all lots in the auction, leave bids, order catalogs and bid live, in real-time through SkinnerLive!