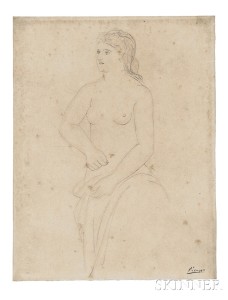 The two-part auction will feature a robust offering of modern and contemporary paintings – including an institutional collection of large-scale Polish works – as well as works on paper by iconic artists from Picasso to Miró. The Prints section will spotlight quintessential examples by such artists as Mary Cassatt and Paul Cézanne. A stellar section of photography rounds out the auction highlighted by a private New England collection of daguerreotypes, as well as several photographs by Andreas Feininger.

Robin Starr, Director of American & European Works of Art at Skinner adds, “What’s really exciting about this auction is not only the strength of the offerings, but also the thrilling provenance of many of these items, having come to us from families of individuals with direct connections to the artists.”

Pablo Picasso is represented by several works, including his pencil drawing Femme retenant son peignoir, c. 1923 (Lot 601, $30,000 to $50,000). This piece also has an intriguing provenance, from the Estate of Hester M. (née Chanler) Pickman (1893-1989), a descendant of the Astor family.  Pickman and her husband had connections to the artists in Paris during the early 1920s, and it is likely that the work was acquired by the couple during their trip to Europe, circa 1923.  The drawing was since passed down through the family to its current owner.

Flush with strong examples of fine works on paper, the May 16th auction will also feature Joan Miró’s Sans Titre, 1958, a whimsical crayon on paper work dedicated and signed by the artist (Lot 610, $12,000 to $18,000). The drawing comes from the Estate of Elizabeth Allen Straus, a lifelong trustee of the Museum of Modern Art who was an acquaintance of Miró. 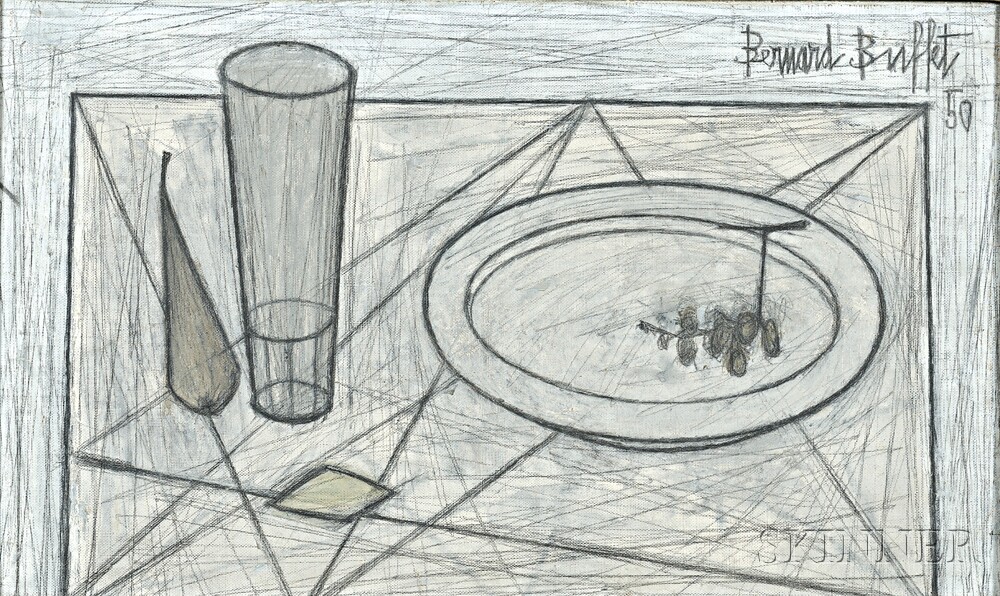 Among the auction’s standout paintings are a selection of large and impactful works from a group of Polish artists, all arriving from an institutional collection. Several paintings by Tomasz Tatarczyk will be on the block, including the oil triptych Czarne Pudlo [Black Box], 1984 (Lot 639, $10,000 to $15,000). Also available are three works by Leon Tarasewicz, including his striking ink and gouache Untitled [Clustered Birds], (Lot 642, $25,000 to $35,000).

Desirable editioned ceramics by Picasso will be showcased, with three examples arriving from a private U.S. collector.  A highlight is Dove at the Dormer, 1949 (Lot 63, $5,000 to $7,000), a charming, white clay earthenware platter from an edition of 200.

Skinner is also pleased to offer a stunning bronze by Käthe Kollwitz entitled Die Klage (Lot 603, $15,000 to $25,000).  Its consignor is a descendant of Jean L. Wasserman, curator of 19th- and 20th-Century Sculpture at the Fogg Art Museum, Harvard University (1969-c.1987), and author of the definitive book on Daumier, Daumier Sculpture: A Critical and Comparative Study. 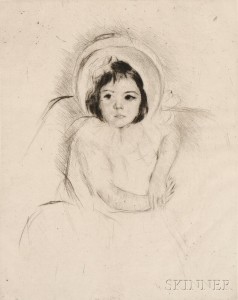 A stellar selection of Prints includes Mary Cassatt’s Margot Wearing a Bonnet (No. 5), c. 1902 (Lot 25, $15,000 to $25,000). Its subject, Margot Lux, was from a small village outside of Paris, and was featured in nearly fifty compositions by Cassatt. Another item with a remarkable provenance, the print descended from the sitter to her grand-niece Ellen Meigs, who subsequently gifted it to the family of the present owner.

Skinner is pleased to offer an exceptional New England collection of daguerreotype portraits of men, women, and children, including several representing the school of Southworth & Hawes, the preeminent Boston studio in the second half of the 19th century. The collection features primarily American works, although it also includes two very standout images by the British daguerreotypist William Edward Kilburn (Lot 87, $1,000 to $1,500 and Lot 150, $1,000 to $1,500). 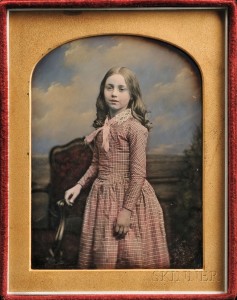 Many of the daguerreotypes showcase high quality hand-tinting (Lot 132, $1,000 to $1,500) and unusual colors – for instance, the yellow used to accentuate a young girl’s dress (Lot 130, $500 to $700). Another interesting image is a daguerreotype made by the studio of Jeremiah Gurney (Lot 141, $500 to $700), a rare find due to the inscribed name at the bottom that may identify the operator who made the portrait.

Join Michelle Lamunière, Photography Specialist, for a presentation on the daguerreotype process with highlights from the New England collection on Thursday, May 15, 2014 at 6PM at the Skinner Boston Gallery. Register online.

Additional photography highlights at auction include an intriguing collection of works from the estate of György Kepes, the prominent Hungarian-born artist, designer and educator.  The collection features several of Andreas Feininger’s iconic New York City works, including The Gyro, Coney Island, 1949 (Lot 163, $3,000 to $5,000).

Collectors can also bid on select prints, photography and multiples from the comfort and convenience of home during Skinner’s Prints & Photography – Online auction, taking place May 13 through May 20. Bidders also have the added value of previewing the online-only lots in person during the regular Boston preview hours.

Previews will be held on Wednesday, May 14, from noon to 5 P.M., Thursday, May 15, from noon to 8 P.M., and Friday, May 16, from 9 A.M. to 10 A.M.  Illustrated catalogs are available from the Subscription Department, at 508-970-3240, or from the Gallery. Prices realized will be available online, at www.skinnerinc.com, both during and after the sale. The Skinner website enables users to view every lot in the auctions, leave bids, order catalogs and bid live, in real-time, through SkinnerLive!