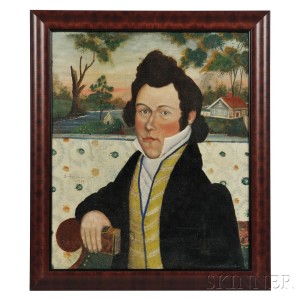 BOSTON, MA – February 10, 2016 – On Saturday, February 27 at 10AM, Skinner, Inc. will host its first American Furniture & Decorative Arts auction of 2016 in its Boston, MA gallery. The sale will showcase a broad range of furniture, ceramics, and fine and decorative arts, from 17th Century andirons to 20th Century Folk Art and Tramp Art.

Leading the sale is an excellent group of Folk Art and Portraiture, highlighted by a spectacular early 19th Century Polychrome Decorated Overmantel Painting on Pine with a Maritime subject (Lot 224, estimated $30,000-$50,000). It was painted in place, circa 1815, at the Brainerd home in Haddam Neck, CT, where it remained in situ until 1981. The panel is thought to depict the capture of the United States frigate President by the British frigate Endymion, an encounter which took place outside New York Harbor in January, 1815. Painted with energy, attention to detail, and considerable drama, the panel is a masterpiece of American Folk Art.

More Folk Art from the hearth comes in the form of two painted fireboards, one from Pennsylvania, the other of Connecticut origin. The Pennsylvania example (Lot 302, $15,000-$25,000), with a faux tiger-maple frame, depicts a fanciful landscape of trees below feathery wisps of clouds and four colorful birds, all above an abstracted group of flowering shrubs which are painted as rainbows. The other Paint-decorated Fireboard (Lot 343, $15,000-$25,000), more subtle but still quietly beautiful, shows a flowering potted plant flanked by flowers, trees, and a border of meandering vines on a gray ground. 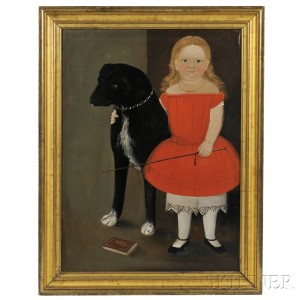 Two folk portraits of particular note are a large Portrait of Alice Whitman Pickett and her dog signed by William Matthew Prior and dated 1853 (Lot 321, $30,000-$50,000), and a scarce Portrait of a Gentleman by the elusive and talented Samuel Jordan, signed by the artist and dated 1831 (Lot 323, $8,000-$12,000). In the work by Prior, Alice, in a bright red dress, has her arm around a black dog with white paws. The background at the top of the painting is divided in half – light gray behind the dog, dark brown behind the girl’s blond hair. The approach, which is very successful in creating contrast, gives the painting a structured, modern feel. Samuel Jordan, who will be the subject of a lecture by noted Folk Art scholar Deborah M. Child prior to the auction, is a fascinating character, and Lot 323 represents him at his best. The subject sits in an Empire sofa and wears a bright yellow vest with cobalt trim. Behind him is another two-part background – a landscape above what appears to be a gray-blue-painted chair rail, and printed wallpaper or below it. Colorful, whimsical, and appealing, the Jordan portrait, like the Prior, pushes the envelope of artistic convention with pleasing results.

Other Folk Art highlights in the sale include 18th and 19th Century paint-decorated woodenware, early 19th Century needlework memorials and samplers from Massachusetts, New Hampshire, and Rhode Island, and a nice group of watercolor miniatures and small framed works. 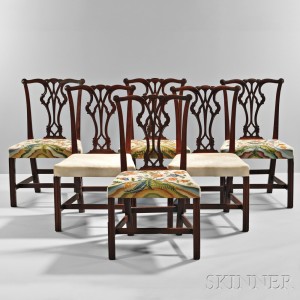 Decorative Arts of the China Trade 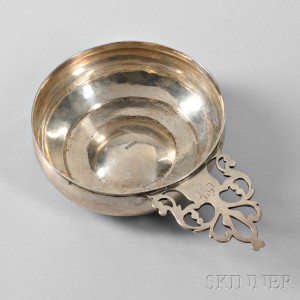 Early American silver includes a rare Silver Porringer by Paul Revere, Jr. (Lot 74, $8,000-$12,000) with a close apparent relationship to a Revere example from the Pearce family of Gloucester, MA, and a Colonial Silver Teapot from Boston, c. 1760-70 (Lot 75, $3,000-$5,000), with elaborate chased and engraved decoration. Other silver includes a group of yacht racing trophies presented to the famous schooner Sachem in the late 19th Century, led by the Sterling Silver Repoussé Wine Cooler trophy presented for winning the 1887 Morgan Cup, a race from Vineyard Haven to Marblehead, MA (Lot 422, $5,000-$7,000).

Please join Skinner for a reception and Samuel Jordan – Artist, Thief, Villain, a lecture by art historian, lecturer, and independent curator Deborah M. Child on Thursday, February 25, at 6PM. The event is free and open to the public, but space is limited. Please RSVP to 508-970-3240 or events@skinnerinc.com.

Previews for the auction are free and open to the public. Previews will be held in Boston on Thursday, February 25 from noon to 7PM and on Friday, February 26 from noon to 8PM. Illustrated catalog 2880B is available from the Subscriptions Department at 508-970-3240 or from the Gallery. Prices realized will be available online at www.skinnerinc.com during and after the sale. The Skinner website also enables users to view all lots in the auction, leave bids, order catalogs and bid live, in real-time through SkinnerLive!