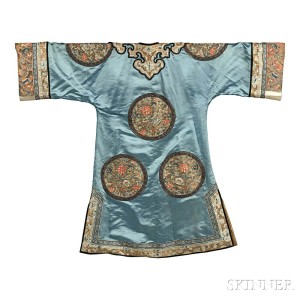 BOSTON, MA – Skinner’s upcoming Asian Works of Art auction features 568 lots with special strengths in the areas of textiles, jade, Chinese paintings, and ceramics. The auction will take place at Skinner’s Boston Gallery on Saturday, March 18 at 11AM, coinciding with the end Asia Week in New York.

The textiles in this auction are especially notable. Jon Eric Riis, widely regarded as the nation’s leading contemporary tapestry artist and an international authority on textiles, will be speaking about the collection on Thursday, March 16 at 6PM. Highlights include:

The skills that produced such remarkable textiles are being lost and the labor-intensive techniques are dying out, says Judith Dowling, Director of Asian Works of Art. This decline is stimulating interest in these needlework treasures, both in China and among collectors around the world. 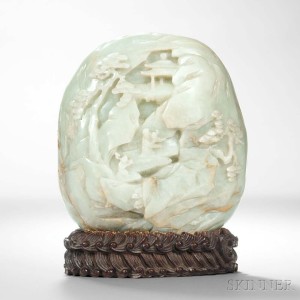 Carved jade is perhaps China’s most admired artifact. This auction includes numerous examples of the revered mineral, including a significant collection of small jades from the estate of a connoisseur who began his acquisitions many years ago.

The jades being offered, many of which are of highly prized white nephrite, are especially distinguished for their excellent carving, notable pieces include: 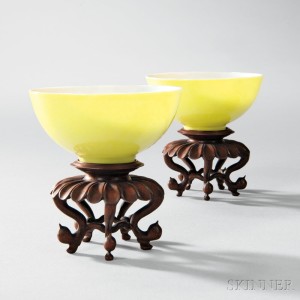 In addition to a fine assortment of blue and white wares, mostly 19th and early 20th centuries, there are stunning rarities such as:

There is a large selection of Chinese landscapes, bird and flower paintings, scrolls, and calligraphy. Two highlighted works are from 20th century masters:

Also offered are a variety of Japanese woodblocks including several Kawase Hasui works noted for the delicately atmospheric depiction of landscapes and cityscapes in snow and rain.

The Library of Joseph Wei 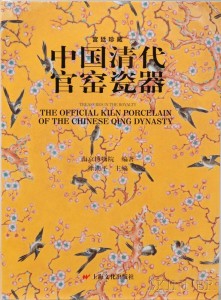 Like his library, Joseph Wei was a person of many interests, with great depth of knowledge–his life’s study focused on the worlds of Asia and the Middle East. He combined his connoisseurship of Asian art with a career as a fine arts dealer, all the while following a spiritual journey that embraced Christianity and Buddhism. His library contains both scholarly monographs, particularly rich in Buddhist material, and titles essential for the study and authentication of works of art.

Highlights from his collection will be offered in the March 18 auction. Additional rare and desirable titles will be available in the online-only auction, A Scholar’s Library, from March 9 – 20.

The print catalog is available for purchase from the Subscriptions Department at subscriptions@skinnerinc.com. Prices realized will be available at www.skinnerinc.com during and after the sale. The Skinner website enables users to view all lots in the auction, leave bids, and bid live, in real-time through SkinnerLive!