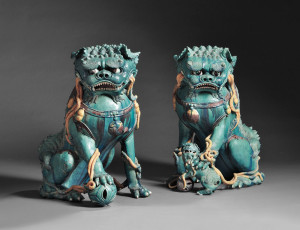 Sold for $92,250. Pair of Large Buddhist Lions, China, 17th century, from the Estate of Peter Rosenberg

BOSTON, MA – May 8, 2014 – Skinner, Inc. saw excellent results from its two-day Asian Works of Art auction, held on April 26 and April 27. The sale earned nearly $2.9 million, with buyers from all over the world bidding on over 900 lots.

According to Judith Dowling, Director of Asian Works of Art at Skinner, “We presented quality material across the board, including the exceptional works of art from the Estate of Peter L. Rosenberg, the late renowned dealer. We saw strong participation at all price points from both new and returning customers, with masses turning out over the phone, online and in person.”

The auction featured more than 700 lots from the Estate of Peter L. Rosenberg, who owned and operated Vallin Galleries in Wilton, CT.

Many of the highest selling items in the auction were from Rosenberg’s collection, including the cover lot, a wonderfully expressive Pair of Large Buddhist Lions from the 17th century, which sold for $92,250. Standing at approximately two and a half feet tall, these lions represent guardians, and were typically placed at the entrance of a shrine.

Furniture, as well as pottery and ceramics made up some of the top selling items from Rosenberg’s collection, including the Massive Rootwood Armchair, which brought $25,830, in addition to Four Longquan Celadon Vases and a Pair of Monumental Cloisonne Vases and Wood Stands, which fetched $29,520 and $23,370, respectively.

“Many people who knew Peter Rosenberg and were part of his client base participated in this auction,” said Dowling, “His family, as well as all of us here at Skinner, were so pleased to see such a fantastic turnout.” 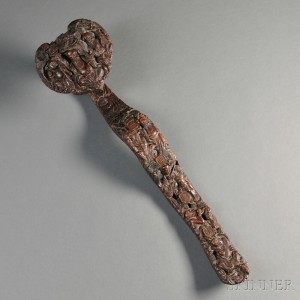 The top lot of the auction was a Carved Wood Ruyi Scepter, which handily surpassed its high estimate for a total of $135,000 with buyer’s premium. This hardwood scepter is carved with Daoist Immortals and motifs representing longevity, wealth and power, and the four characters indicating the highest rank of the Imperial court (Yi Pin Dang Chao).

Also drawing excitement from bidders was a Framed Painting from China, in the manner of Qiu Yin (1494-1552), depicting a scholar sitting in a landscape with pines, a boy holding peaches walking toward him, and two seals with an inscription, Jia Jing Xin Hai Zhong Chun Qiu Yin Hua Zhi. This piece went for well over 100 times its estimate, for a total of $78,720. A Portrait of a High-Ranking Courtier, which sold for $46,125, was another noteworthy piece of artwork.

An exceptional example of a Manchu Woman’s Formal Court Robe soared past the pre-sale estimate, selling for $43,050. This item was originally purchased from G. T. Marsh and Co., San Francisco: the first Asian art gallery in the United States.

A Hanging Scroll in the manner of Huang Junbi, a gift from Gao Zhiging, the mayor of Kunming in the early 20th century, also smashed the pre-sale estimate, fetching $43,050. Another 20th century highlight, a Jade Buddha, sold for $27,060, more than nine times the pre-sale estimate. Also a hit with bidders was a Flambe Vase from the Qing Dynasty which sold for $31,980, and a Wood Sculpture of Guanyin, which brought $23,370.

In addition to items from the library of Peter L. Rosenberg, Skinner offered books from the Library of Anne de Coursey Clapp, professor at Wellesley College. According to Dowling, “The book sales were tremendous, and brought in a number of new buyers who bid aggressively for this material.”