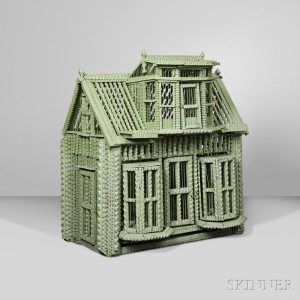 Funky, quirky, out of sight, wild! Such words are heard repeatedly as people come upon the eclectic Elaine Rush collection in Skinner’s Marlborough gallery as it awaits the online auction that will run from November 30 to December 16.

It’s tempting to call the furniture, accessories, architectural elements, found art and decorative pieces a “cool-ection,”, because cool is the word most often uttered by passers-by.

The auction is presented by the 20th Century Design Department, but like the collector herself, the collection defies boundaries. The 186 lots cross styles and categories from tramp art to folk art, Adirondack to art deco. Yet it is truly a collection, consciously assembled with a unifying spirit. When asked for the common denominator of her collection Rush says “It’s all about detail.”

What’s in a name?

Elaine “Jazzy” Rush is a name well-known in American avant-garde collecting. Starting in the 1970’s, after the young Montreal-born fashionista moved to New York, she began collecting on her drives to flea markets all over the east coast.

Rush never asked herself, or anyone else, “Should I buy this?” or “Do I really have room for that?” She influenced others far more than she was influenced by them.

After years as a noted dealer and grand acquisitor, Rush has decided that it’s time to move and move on. She says “It was fun to collect; it will be hard not to have these pieces which are my personal favorites among several decades of buying and selling. But I’m confident that Skinner’s outreach will place my treasures in appreciative new homes.”

A collection amassed by one individual has the stamp of that person’s tastes, impulses and preferences. One of the most striking features of the Rush collection is its variety and breadth. It is exuberant, eye-catching and even at times eccentric. 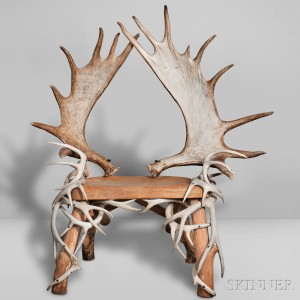 Out of the ordinary

Rush’s large collection of decorated Indian clubs (Lot 1006, Estimate $4,000-6,000) is a perfect example of her attraction to detail in a simple form: the everyday transformed into art. Every piece in the entire collection offers a surprise, be it rich texture, eye-catching color, or unexpected scale.

Tramp art was a favorite. The niche market was full of surprises, such as a huge oversize tramp art frame that proved too big to fit through the door of her home. Adirondack pieces and horn furniture also caught her eye: ingenious, one of a kind, organic.

Another common thread apparent in Rush’s collection is that so many of these pieces, in all mediums, were made for fun, for self-expression or for love. As she observes, “Folk artists don’t equate time with money.” Their intricate creations were, and still are, made without money as a primary consideration.

Those who have had the good luck to preview the Rush collection point to their favorites. 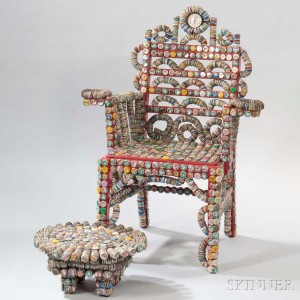 Jane Prentiss, Skinner Vice President and Director of 20th Century Design, notes that “the folk art objects made from bark and roots appeal to me, as does the bottle cap furniture by Rick Ladd. They seem to have soul.”

The remarkable bottle-cap art, comprising a chair, chest of drawers, and mirror, sums up Rush’s gift for serendipity. She acquired these functional sculptures by Brooklyn artist Rick Ladd by accident. They were gifts from the artist in appreciation for a kindness she had done him.

A large Adirondack clock case (Lot 1103, Estimate $2,500-3,500) that might originally have graced a huge Lake Placid lodge. Yet, as Fletcher remarks, it seemed perfectly appropriate in Elaine Rush’s average-sized house. 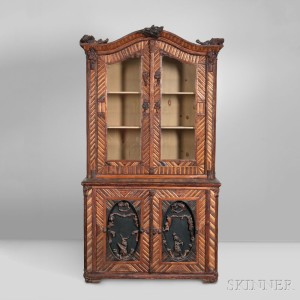 Two large cabinets with glazed doors (Lot 1015, Estimate $6,000-8,000)“channel a tranquil Adirondack lake full of trout.” (This from a man who doesn’t fish.) One is a tramp art cigar box masterpiece, “as serious a presence as any piece of formal furniture.”

A folk-art mirror frame with carved wood branches, blossoms, animals and birds (Lot 1002, Estimate $2,000-4,000). Like so many outstanding items in this collection, it is complex, organic, and full of fascinating detail.

The future of cool

Jane Prentiss reflects that the pieces in the Rush collection have much to say in the 21st century. “As we move faster, folk art reminds us of who we are as humans. It speaks to our ingenuity to create objects from natural and found materials. Time to create has become a luxury. Collecting objects made by hand will likely see increasing interest.”

Elaine Rush’s eye for the extraordinary in the everyday has resulted in a treasury of design and craftsmanship that offers something for every taste and style.

Karen Keane, Skinner Partner and CEO, passes by the Rush collection every time she enters or leaves her office. This experience prompts a very personal reaction: “Elaine’s collection is where country Adirondack culture meets funk. She looks to the past and appreciates our history but she treasures the ephemeral. Her collection speaks to the future because of its fabulous and fearless eclecticism.”

The Elaine Rush Collection will be previewed with Skinner’s December 20th Century Design auction. Auction previews are free and open to the public and held in Boston on Wednesday, December 14 from 12-8PM and Thursday, December 15, from 8-10AM. The catalog is online with images of all lots to be sold in this internet-only auction. Log in or create a new account on the Skinner website to participate.