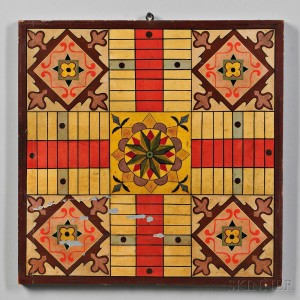 BOSTON, MA – June 5, 2015 – Skinner, Inc.’s June Americana-Online auction is comprised of a single, diverse collection of American furniture and decorative arts, assembled by a Northeastern couple whose eclectic tastes ranged from urban to country, classic to quirky, and folky to fine. The public will have the opportunity to browse, discover and bid from more than 500 lots on the block June 8th through June 16th at www.skinnerinc.com.  As always, all items can be viewed in person at Skinner’s Marlborough Gallery on Thursday June 11 from 12 PM to 5 PM, Friday, June 12 from 12 PM to 7 PM and Saturday, June 13 from 12 PM to 5 PM.

Stephen Fletcher, Vice President and Director of American Furniture & Decorative Arts at Skinner noted, “The collectors’ passion brought them to shops and dealers throughout New York State, Pennsylvania, New Jersey and New England. The result is wide-ranging assortment of intriguing pieces that represent their appreciation for both the formal and vernacular. This auction has something for every lover of Americana, with many examples to round out one’s antique collection or to enhance even a modern design aesthetic.”

The collection is highlighted by a large group of trade signs and advertising, representing locales and long-forgotten establishments throughout the Northeast. Examples include a two-sided ‘W. JONES’ tavern sign dating to the early 19th century (Lot 1361, estimated between $1,500 and $2,500), in addition to a two-sided ‘B.L. PAGE/STOVES AND TINWARE.’ trade sign, America, 19th century (Lot 1469, $600 to $800). 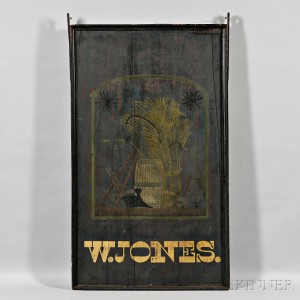 A variety of small furniture will also be on the block, encompassing painted mini chests, step stools, children’s chairs, and more.

A strong offering of American school paintings up for auction is exemplified by a late 19th century Portrait of the Paddlewheel Steamer Onondaga (Lot 1090, $3,000 to $5,000)

The collectors viewed everyday objects as works of art, and this auction is replete with a variety of charming household items. From the kitchen, a selection of early wood-carved butter molds will be available (Lots 1419-1425, various estimates), as well as several rare tin cookie cutters  from the early 19th and 20th centuries (Lots 1405–1418, various estimates) and an assortment of colorful wooden pantry boxes and tools.  A 19th century wooden cakeboard depicting George Washington stands out for its beautiful, carved detail (Lot 1047, $800 to $1,200). 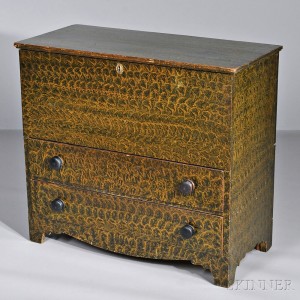 Recreational items at auction include a selection of more than thirty-five pairs of antique ice skates, a wide variety of children’s toys, and painted gameboards – including a 19th century painted and gilt Parcheesi game board (Lot 1053, $800 to $1,200)

View the catalog on the Skinner website at https://www.skinnerinc.com/auctions/2824T. Each lot in the online catalog displays the current bid, asking bid, and time remaining in the auction, in addition to detailed images and condition information. Place a bid for the next bidding increment or place a maximum proxy bid. The system will automatically bid competitively up to that price. Experts are available throughout the auction to answer questions and provide additional information about the lots offered.