Bidders competed from the floor, the phones, and over the internet throughout the sale. “There is a definite resurgence in interest in rare and evocative American Indian art and artifacts and every category performed well across the board,” offered Douglas Deihl, director of the American Indian & Ethnographic Art department at Skinner. “This record-setting sale represented early American material at its very best and we are pleased to bring items of this quality to auction.” 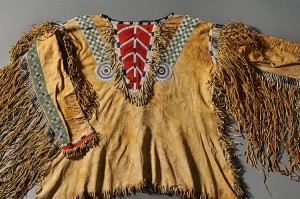 The top lot, a mid-19th century Plains pony beaded hide shirt that had belonged to Eugene Burr, exceeded its pre-sale estimate high, bringing $144,000. In 1855, the Burr family traveled west along the Oregon Trail to Utah. The father, David H. Burr, had been appointed the first Surveyor General to the state of Utah. His sons, David A. and Eugene Burr, traveled with him through Indian Territory and kept a diary of the journey. Eugene Burr died at the young age of 17 in 1857; his initials can be seen marked inside the top-selling item.

Heated bidding on a fine assortment of hide cradles pushed the prices of multiple lots well above pre-sale estimates. A pictorial Lakota cradle with a pre-sale estimate high of $35,000 sold for $78,000. A Cheyenne beaded hide cradle also doubled its high estimate, selling for $30,750. 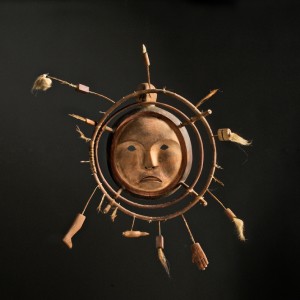 Two rare and beautiful Yupik Eskimo masks brought high prices. One mask showing a bird head on top of a circular human-like face sold for $31,200. This piece descended in the family of Gustaf Osterberg, Chief mate on the US Coast and Geodetic Survey ship Yukon. Osterberg made several trips to the Alaskan coast starting in 1913, and possibly collected the mask on Nunivak Island. Another Yupik mask depicting a face framed by stylized animal ears brought $57,000.