Introducing a new specialty focus on Historic Arms and Militaria

MARLBOROUGH, Mass. – April 26, 2013 – Skinner, Inc. will host an auction of Clocks, Watches & Scientific Instruments on Saturday, May 4th in its Marlborough gallery. The sale features an eclectic variety of French, English and American clocks, early watches and science material. In conjunction with this sale, Skinner is proud to announce the first auction of Historic Arms & Militaria presented by expert Joel Bohy. The militaria portion of the auction features flintlock and percussion muskets, pistols, and Civil War archives. 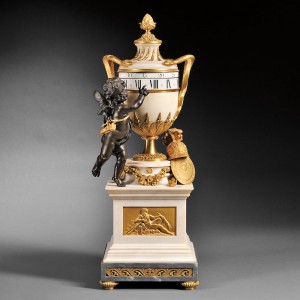 The auction’s cover lot is a French white marble and ormolu annular dial clock from the third quarter of the 19th century (lot 361, estimated between $15,000 and $25,000). The clock depicts a bronze standing cherub with gilt quiver and an outstretched arm that points to the current time. In addition to the sophistication of its timekeeping mechanism, the piece is a magnificent work of art – with classical ormolu friezes and foliate figures among the many designs adorning the piece.

A classical French lyre clock and garniture circa 1870 (lot 360, $8,000 to $12,000) marries precision timekeeping with beautiful period decoration. The variegated green-marble lyre-form case is decorated with applied ormolu beading and a figural sunburst at the top. Two matching vase-form candelabra complete this functional and decorative set.

A Morris Tobias binnacle timepiece with fusee movement, London, circa 1795 (lot 320, $4,000 to $6,000) provides a fine example of nautical timepieces offered in the sale. It comes to Skinner from the Time Museum which was open to the public for nearly 30 years in Rockford, Illinois. After it closed, the collection was moved to the Chicago Museum of Science and Industry where it was exhibited from 2001 to 2004. 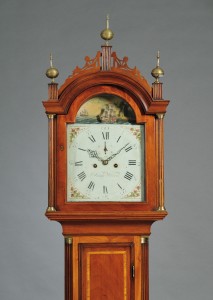 A classic New Hampshire mirror clock circa 1825 by Joseph Chadwick (lot 458, $2,000 to $3,000) comes to Skinner in an excellent state of preservation, with undisturbed dial and signature, and original glazing. A mahogany “Brooklyn” lever spring shelf clock is an extremely rare example by Joseph Ives (lot 484, $10,000 to $15,000). This experimental clock was designed to utilize a wagon spring to run the clock. 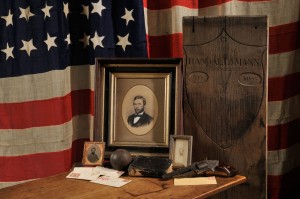 Skinner is pleased to bring Historic Arms and Militaria to auction as a new specialty focus under the direction of Joel Bohy.

The inaugural auction features a collection of material once belonging to Corporal Randall Mann of the 25th Massachusetts Civil War Regiment. The “Massachusetts 25th” attacked Roanoke Island, North Carolina on February 8th, 1862. Forty-two men were wounded in the battle and six were killed, including Corporal Mann. Mann was carrying a Bible in his pocket at the time he was shot, with the bullet piercing the book before mortally wounding him. In addition to the Bible, his temporary wooden grave marker, pistol, and other personal effects will be offered (lot 149, $8,000 to $10,000). Corporal Mann’s grave marker is particularly rare. Subject to as they were rot and decay, few wooden grave markers from the Civil War era remain today.

Two black powder kegs, both marked with the grade of powder they contained (lot 131, $300 to $500), form another rare offering.

An illustrated catalog for sale #2652M is available by mail from the subscription department at 508-970-3240. It is also available at the gallery.