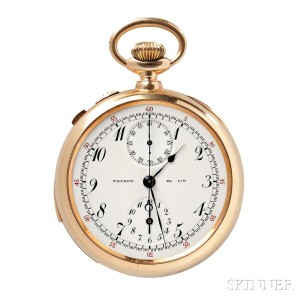 The first marine chronometer made by William Edward Frodsham was discovered during an “attic cleaning” this year and brought in to the Marlborough gallery.  One of only five known by this maker who died two years after its manufacture, the William Edward Frodsham’s Marine Chronometer, No. 1, c. 1823, (Lot 209, Estimate $4,000-$6,000) was made in London when Frodsham was about twenty years old. The son of the famous chronometer maker, William James Frodsham, reportedly made only five chronometers, but the performance at sea was remarkable. No. 1 traveled on board ship to the Arctic Circle in Canada and Norway, while chronometer No. 2 traveled with Charles Darwin on a five year voyage and sold recently in London for over $100,000. Sadly, William Edward died from drowning in 1825. 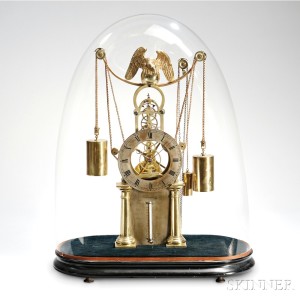 Out of public view for over three decades, a collection of over 100 gold watches from the William Bond Shop Family Collection will delight collectors of pristine, historic timekeepers.   This significant collection was cleaned, lubricated and stored over thirty years ago.  Mainly 14 and 18kt gold, these watches span the years from 1790-1990 and include Harrison Gray Otis’ watch serviced by the Bond shop over a 75 year period (Lot 12, Estimate $7,000-$10,000). Other lots include a five minute repeater by Jules Jurgensen, Copenhagen (Lot  102, Estimate $4,000-$6,000) minute and quarter repeaters by Patek Philippe and Tiffany, split-second chronographs, chronometer escapements and early verge watches complete the technical array. Skinner sold the Bond Shop Regulator No. 396 at auction in November, 2010 for $539,500. 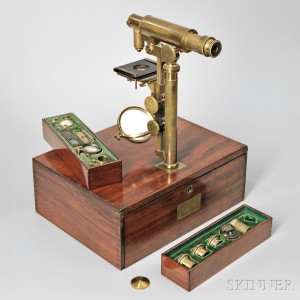 Previews for the auction will be held on Thursday, October 29, from noon to 7 PM Friday, October 30, from noon to 7 PM., and Saturday, October 31, from 8 AM to 9:30 AM. Illustrated catalog #2857M is available from the Subscription Department at 508-970-3240. The catalogue is also available at the gallery. Prices realized will be available at www.skinnerinc.com during and after the sale. The Skinner website also enables users to view all lots in the auctions, leave bids, order catalogs and bid live, in real-time through SkinnerLive!