MARLBOROUGH, Mass. – July 16, 2013 – Skinner, Inc. will host an auction of Asian Works of Art on July 26th in its Marlborough gallery. Following the event, a second offering of lots will be open for bidding beginning on July 29th through August 6th exclusively online as a Skinner timed auction. This eclectic sale features a wide variety of Chinese, Korean, and Japanese decorative arts and antiques, as well as a sampling of art and artifacts from Tibet, Thailand, the Middle East, and India. 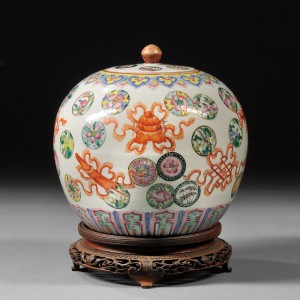 Export and Republic porcelain and lacquerware from various estates and collectors will be featured, including a 20th century blue and white bowl with a six-character Chenghua mark (lot 62, $2,000 to $3,000), a pair of Nanking-style blue and white Meiping vases depicting riverside pagodas and houses (lot 82, $400 to $600), and a 20th century famille rose covered jar with Buddhist emblems (lot 124, $300 to $500). Two black lacquer wood document boxes with mother-of-pearl inlay will be offered, one decorated with confronting dragons flanking a pearl (lot 324, $500 to $700) and the other with a peacock roundel (lot 329, $400 to $600).

Japanese porcelain is highlighted by two Satsuma covered censers, one decorated in gilt with figures, flowers, and landscapes (lot 200, $300 to $500), the other depicting figures in two butterfly-shaped panels on a flowered ground in gilt and polychrome enamel (lot 201, $200 to $300). Each censer bears a gold Kozan mark. A Satsuma covered teapot with a mark by the Shimazu Family is also available (lot 210, $200 to $300). 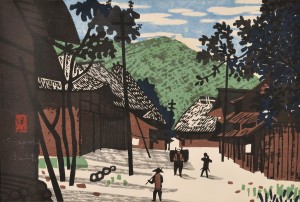 Furniture highlights include a Chinese export hardwood bench with a central cartouche depicting flowers and birds surrounded by Immortals and mythical beasts (lot 560, $1,000 to $1,500) and a 19th century seven-panel inlaid wood throne screen (lot 585, $2,000 to $3,000), each panel decorated with carved chilong amidst ruyi-clouds. 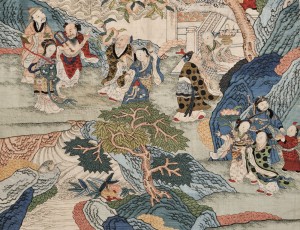 On July 29th bidding will commence for the online Asian Art auction which offers a wide selection of material that will generate excitement for both collectors and interior designers alike. Highlights include a 19th century kesi tapestry from the family of an early 20th century collector (lot 327, $2,000 to $3,000), a yellow silk kimono decorated with a diamond-blossom pattern in purple done in the nu shibori dying technique (lot 415, $300 to $500), an Indian bronze figure of a naga seated on a lotus throne (lot 435, $500 to $700), and two Chinese export chargers, one decorated with birds and flowers, the other depicting scholar’s objects (lot 69, $375 to $625).

An illustrated catalog for #2665M and #2666T is available from the subscription department at 508-970-3240. It is also available at the gallery. Prices realized will be available at www.skinnerinc.com during and after the sale. Skinner’s site also allows users to view all lots in the auctions, leave bids, order catalogs, and bid live in real-time through SkinnerLive!