BOSTON, MA – Skinner, Inc. presents an outstanding two-session auction on Friday, January 27 in its Boston gallery.  Fine Prints & Photographs starts at 12PM, followed by  Fine Paintings & Sculpture at 4PM. Previews will be held on Wednesday, January 25, 12 to 5PM; Thursday, January 26, 12 to 8PM; and Friday, January 27, 9 to 10AM.

Robin S. R. Starr, Vice President and Director of American & European Works of Art, notes that in addition to a broad selection of pre-20th-century material, the auction offers an especially robust quantity of modern and contemporary work in all categories.

“The market is hungry for this,” Robin says, and that hunger can be satisfied with selections that are affordable for beginning collectors, as well as masterworks for the advanced connoisseur.

A considerable number of items are from private collections and fresh to market, including notable examples that have descended in the families of the artists or original owners.

The selection of prints is both broad and deep. There are works by traditional masters Rembrandt, Dürer, and Piranesi as well as strong offerings by more modern artists such as Josef Albers, Philip Guston and Alex Katz.

♦ David Hockney, Lightning (Lot 78, $7,000-9,000) One of several Hockney prints referencing the phenomenon of lightning, it is strikingly different from the colorful images more commonly associated with this multi-faceted artist.

♦ Roy Lichtenstein, The Art Critic (Lot 88, $25,000-35,000) is a late work, at a point when the artist was playing off his own previous works and also looking back at the art of the earlier 20th century. This intentionally Picasso-esque version of an iconic Lichtenstein girl is retrospective in more than one sense.

♦ Frank Weston Benson (Lots 18–25, Estimated between $600-1,800). Benson’s close observation of the natural world is both timely and timeless. These pieces make the work of a major American artist available at very attractive prices.

Additionally, there are works by Paul Klee, Helen Frankenthaler, Frank Stella, Robert Rauschenberg and—literally—too many other important artists to list. 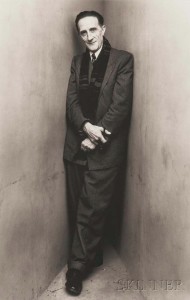 73 diverse lots are being offered. Michelle Lamunière, Fine Photographs Specialist, points out that besides 20th-century work, there is a broad selection of 19th-century material, including images of the Middle East by Francis Frith and Auguste Salzmann.

A major grouping of photographs are from the collection of Harvey Shipley Miller, a leading collector in the 1970s and 80s, at a time when there were few serious collectors of photographs as fine art. Proceeds from the sale of these items will benefit the Philadelphia Museum of Art.

Of special note are:

♦ Alfred Stieglitz, The Two Poplars, Lake George (with The Dying Chestnut Tree) (Lot 162, $8,000-12,000) reflects the photographer’s shift from a Pictorialist to a modernist “straight” aesthetic, while also revealing the subject of trees and nature as sources of personal meditation.

♦ André Kertész, Distortion 166 (Lot 161, $5,00-7,000) is one of a series of nudes photographed with mirrors and special lenses to create surreal distorted images.

♦ Irving Penn, Marcel Duchamp, New York (Lot 181, $15,000-25,000) This platinum print (made in 1979 from a 1948 negative) is one of Penn’s famous studio wall “corner” series of portraits, important for its size and subject as well as its intrinsic artistic appeal and innovative use of a starkly simplified background.

♦ Sally Mann, Untitled (Lot 196, $8,000-12,000) Mann is best known for her photographs of her young children and husband on their family farm in Virginia. This work represents another of Mann’s abiding interests: the Southern landscape haunted by the presence of history.

With over 275 lots, the second session of the auction promises a great start to the New Year. Robin Starr notes that Russians and other artists from the former Soviet Republic make an especially strong showing.

♦ Ivan Aivazovsky, Along the Coast, Capri (Lot 265, $130,000-190,000). This leading Russian romanticist, influenced by Turner, was especially well known for seascapes and was hugely successful in his own lifetime.

The offerings are so rich that there will be a special lecture in conjunction with the auction, Across the Chasm of Foreignness: Art from the Russian and Soviet Empires in the West, by Anna Winestein, Executive Director of the Ballets Russes Arts Initiative, on Wednesday, January 25 at 6PM.

Artists from Cuba, Hungary, Belgium and Scotland, as well as many other countries, are represented among the more familiar American and European painters. Diversity of period, style, medium, and subject matter continue as a hallmark of this multi-part auction.

♦ Marino Marini, Two Figures and a Horse (Lot 435, $40,000-60,000). In both his paintings and his sculptures, equestrian themes were pre-eminent in the Italian modernist’s work.

♦ John Singer Sargent, Lady Poole (Lot 373, $50,000-70,000). The artist came to prefer informal and intimate charcoal drawings like this to the full-length, sumptuously dressed portraits for which he is best known.

Robin Starr points to a group of French Post-Impressionist works of particular interest. These include Lot 363, Les fumées ($60,000-80,000) and Lot 364, La tour de Collioure ($250,000-350,000) both by Henri Martin. The artist experimented with the pointillist technique most associated with Georges Seurat, used to great effect in the misty atmosphere of Les fumées (meaning “the smoke”) and on a sunlit beach scene in the south of France. 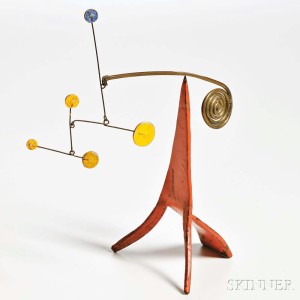 Another significant Post-Impressionist work is by Louis Valtat, Boules de neige et pavot (Lot  396, $15,000-25,000). Valtat was associated with the Fauves and was an important figure in the stylistic transition from Monet to Matisse.

Alexander Calder is exceptionally well represented in this auction by five works in different media.  Three unique pieces are offered in the second session of the auction:

♦  Aula Magna (Lot 438, $25,000-30,000), a gouache, pencil, and ink drawing for an installation in the auditorium of the Universidad Central de Venezuela. Working with the architects and sound engineers, Calder designed a system of suspended and fixed large panels that were successful both acoustically and aesthetically.

♦ Profils (Lot 439, $70,000-90,000), gouache and ink, is a lively portrayal of a circus act. It re-caps the themes of balance and movement central to all Calder’s work, especially his sculptures and mobiles.

♦ Untitled, Standing Mobile (Lot 440, $150,00-250,000) is a moving sculpture that, while less than six inches high, displays the engineering skill, artistic genius and wit for which Calder is renowned.