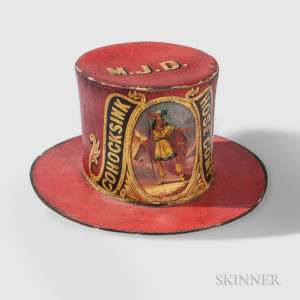 Skinner’s upcoming August Americana auctions are comprised of a varied and interesting array of early American furniture, paintings, needle works, objects of historical interest, and maritime pieces. Totaling over 1300 lots, each object displays some alluring characteristic that makes it best in its class, whether it’s an 18th century New York Windsor highchair with fine blue-green paint (Lot 377, Estimated between $20,000-25,000) or a late 19th century cap gun toy with a humorous message (Lot 1344, $800-1,200).

The 603 lot August Americana live auction will be held at Skinner’s Marlborough gallery, Sunday, August 13 at 10AM, and begins with three highly focused single-owner collections of largely fresh-to-market antiques. The collections are highly personal, reflecting the taste and knowledge of connoisseurs who sought out the best of the best.

• The second offering of The Jonathan Rickard Collection of Mocha and Related Dipped Wares. Comprising the first 39 lots of the auction, the collection includes numerous wonderfully colorful and complexly-decorated pitchers, mugs, and other small items of a quality rarely encountered on the market today. Highlight: Slip marbled pearlware jug, c. 1800 (Lot 7, $800-1,200) 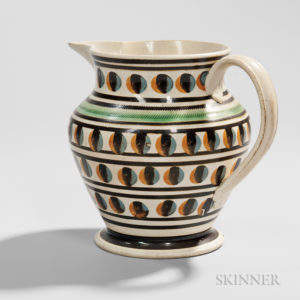 • Nearly 60 lots from the collection of New Hampshire picker Peter Carswell, a dealer’s dealer who concentrated on northern New England material. From early furniture and trade signs to folk paintings and landscapes, everything he owned was a cut above. Highlight: Frank Henry Shapleigh painting of Lewis Nute farm (Lot 93, $4,000-6,000)

• Over 100 lots from The James and Pamela Alexander Collection of late 18th century and 19th century furniture and decorative arts features items from Pennsylvania and Maryland, as well as New England. Theirs is a highly personal collection composed of early furniture, folk art, weathervanes, textiles, and early decorative items, carefully curated and acquired purely for the enjoyment that comes from living with antiques. Highlight: Six mahogany dining chairs, c. 1770 (Lot 1634, $3,000-5,000) 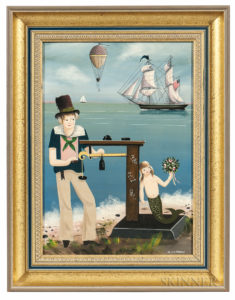 A concurrent August Americana online auction runs Friday, August 4 through Monday, August 14 and includes nearly 800 lots that are as varied and intriguing as the items in the live auction.

Highlights range from furniture to glass, folk art to toys. Among them:

• An exceptional grouping of cap guns and toys (Lots 1344 to 1373).
• A maritime-themed collection of over 100 objects focused on items from Grenfell Industries in Newfoundland from a notable Long Island collector. Offerings include hooked rugs and numerous rare carvings. This is the most diverse group of Grenfell objects Skinner has ever handled.

Both the live and online August Americana offerings share, to a notable degree, what Chris Barber, Deputy Director of American Furniture and Decorative Arts, calls “soul,” an essential integrity that may be elusive in words but is unmistakable once seen.

The catalog is available for purchase from the Subscriptions Department at subscriptions@skinnerinc.com. Prices realized will be available at www.skinnerinc.com during and after the sale. The Skinner website enables users to view all lots in the auction, leave bids, and bid live, in real-time through SkinnerLive!

Skinner auctions draw international interest from buyers and consignors alike, with material regularly achieving record prices. The company’s auction and appraisal services focus on fine art, jewelry, furniture, and decorative arts from around the globe, as well as wine, fine musical instruments, rare books, Asian art, clocks, and more.
Widely regarded as one of the most trusted names in the business, Skinner appraisers have appeared on the PBS-TV series, Antiques Roadshow, since the show’s inception. Skinner has galleries in Boston and Marlborough, Massachusetts, as well as in New York City and Miami, Florida, with bidders participating in person, by phone, and online. For more information, visit www.skinnerinc.com, find us on Facebook, or follow us on Twitter and Instagram.

One thought on “Americana Exceptionalism: Skinner’s August Americana Auctions Celebrate Over 200 Years of the Nation’s Ingenuity and Artistry”