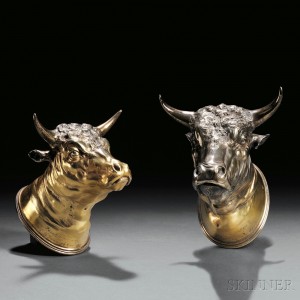 “The chemistry in this sale was unbelievable,” offered Stuart Slavid, Director of the European Furniture and Decorative Arts department at Skinner, Inc. “The success of the The Fletcher Collection of Imperial Russia, high-end silver, and sculpture proved that there is a healthy market for a wide variety of items.”

The high-end silver market remains strong with many pieces realizing excellent prices at the April sale. The auction’s top lot, a pair of Victorian gilded silver herd trophies, exceeded its pre-sale estimate high of $5,000, bringing $42,000. An impressive silver trophy from the Victorian Royal Hunt Cup at Ascot made by Hancock & Co. brought $34,800. A seven-piece Tiffany & Co. sterling silver tea and coffee service more than doubled its pre-sale estimate high of $9,000, selling for $20,400 and a Buccellati sterling silver shell-form centerpiece sold for $14,760.

With 2013 marking the 400th anniversary of the establishment of the Romanov Dynasty, collectors bid on highly sought-after antiques and artifacts relating to the Romanovs presented in the The Fletcher Collection of Imperial Russia. John Fletcher always had an intense interest in Nicholas II and his family. The collection was unlike others focused on imperial Russia, and reflected Fletcher’s unique perspective on the Romanovs, providing glimpses into the personal and domestic lives of the ill-fated Tsar and his family. A Russian icon depicting Our Lady of Kazan brought more than ten times its pre-sale estimate high of $1,500, selling for $15,990. A pair of Fabergé gilded silver and enamel napkin rings brought $15,600 and an imperial porcelain factory Easter egg sold for $11,400.

A wide variety of sculpture from the collection of a Midwest gentleman sold strongly at auction. Outstanding examples include an Art Deco bronze and ivory enamel-decorated figure of a dancer cast after a model by Gerda Iro Gerdago which brought $13,200, and a sculpture depicting Nature Revealing Herself to Science after Louis Ernest Barrias which sold for $12,000. A painting by Modesto Texidor y Torres depicting boys sailing toy boats in a tide pool bested its pre-sale estimate high to sell for $15,600.

The success of the recent sale demonstrates the effectiveness of the upgraded SkinnerLive! online bidding platform. The April 6th European Furniture & Decorative Arts auction witnessed the largest number of online participants in a Skinner auction to date. Hundreds of registered bidders took part in the sale, while thousands watched the auction unfold live online.

With the new SkinnerLive! platform, Skinner saw extremely strong increases in the percentage of lots sold, total hammer, and average hammer price for lots sold through the online platform. A large number of bidders from Russia and elsewhere in Europe participated in the sale, taking full advantage of user-friendly features such as faster bidding, crystal clear audio, full catalog descriptions and condition reports, and real-time access to Skinner specialists. Thousands of other visitors to the Skinner website on April 6th were able to simply watch the action, without needing to register or log in to the platform. Skinner is pleased about the success of the upgrade to SkinnerLive! and is confident about its future as a means to increase participation online.

Any users wishing to register for SkinnerLive! or those that wish to watch on auction day simply need to click the “bid live” button for the auction of interest on the Skinner auction schedule.

The next European Furniture & Decorative Arts auction will take place on Saturday, July 13th and will feature a vast array of fine ceramics including: The Harry Root Collection of 18th Century English Pottery, Royal Doulton Flambé, and a fine selection of Wedgwood. The department will be holding a consignment day for fine silver in the Greenwich, Connecticut on Monday, June 10th. For more information please contact events@skinnerinc.com or call 508-970-3240.