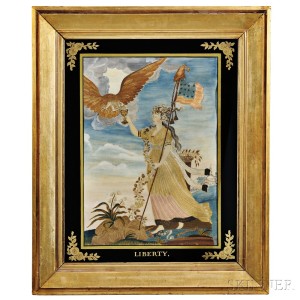 MARLBOROUGH, MA – Skinner, Inc. will present a two-day auction of American Furniture & Decorative Arts on August 14 and 15 in their Marlborough Gallery. The auction of over 770 lots will feature a wide array of Americana, including strong collections of folk portraiture and painted furniture, early American furniture and smalls, and Pennsylvania folk art including fraktur and painted tin.

Another impressive collection of early Americana, consigned by descendants of Reverend W. Brooks Rice of Wellesley Hills, Massachusetts, includes several exceedingly rare pieces of furniture. Two Massachusetts pieces made in the late 17th century standout in this collection, a molded-front chest over two drawers with original painted decoration (Lot 38, $6,000-8,000), and a joined table with drawer featuring channel-molded details, boldly turned legs, and full height (Lot 39, $30,000-50,000). Made later, but no less impressive, is a fine pair of painted fan-back Windsor side chairs with exaggerated turnings and splay, c. 1795 (Lot 51, $8,000-12,000). 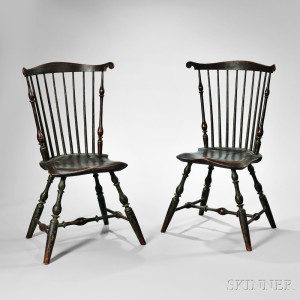 Strong offerings of American girlhood embroidery are featured in Session I, including both samplers and pictorial works. Two lots are illustrated in the 1993 landmark book Girlhood Embroidery: 1650-1850, by Betty Ring; Mary Shillaber’s 1776 sampler (Lot 151, $10,000-15,000) featuring an early pictorial register, and a sampler by Sally Ayer of Haverhill stitched c. 1791 (Lot 152, $8,000-12,000). The samplers are followed by a masterpiece of neoclassical needlework composed as “Liberty in the Form of the Goddess of Youth” (Lot 160, $15,000-25,000), after the well-known late 18th century allegorical painting by Edward Savage, which brims with optimism for the future of the then-new nation. 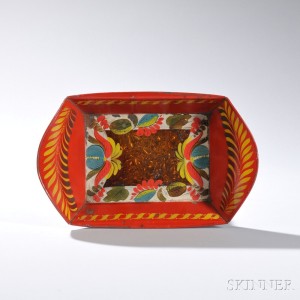 Session II opens with a carefully curated and colorful private collection of folk art, concentrated in the decorative arts of late 18th and early 19th century Pennsylvania. Numerous offerings of black and red-painted tinware start the collection, highlighted by a red-painted bread basket (Lot 402, $8,000-12,000), and an unusual cann with starburst decoration (Lot 407, $1,500-2,500). Other notable smalls from the collection include a Lehnware egg cup with rare blue-painted ground (Lot 420, $1,500-2,500), several very nice fraktur including a work by Daniel Otto, the “Flat Tulip Artist” (Lot 421, $8,000-12,000), and groups of small wallpaper-covered boxes, painted chalkware, and cobalt-decorated stoneware. 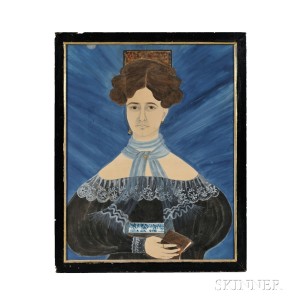 The estate of collector Jean Curtin, of Georgetown, Maine, opens with a charming watercolor by an unknown artist, depicting a courting couple in a park (Lot 484, $6,000-8,000). Other lots from her estate include masterpieces of New England folk art and superb painted furniture, with a focus on items from northern New England. These include portraits by Ruth Whittier and Samuel A. Shute of Vermont, a married couple working in tandem until Samuel’s death in 1836. Together they produced some of the most iconic, inventive, and instantly recognizable works of American folk art. A portrait of Electa Snow Pierce (Lot 519, $100,000-150,000) showcases the hallmarks of their style; a subtly striped background, a stylized yet distinct face drawn mostly in pencil, and small pieces of gold foil to represent Electa’s jewelry. Other artists collected by Ms. Curtin include; Sheldon Peck, Joseph H. Davis, Jacob Maentel, Rufus Porter, and William Matthew Prior, many of whose works are represented in multiple. Furniture from Ms. Curtain’s Estate is led by a light green-painted barrel-back corner cupboard with glazed sidelights (Lot 492, $6,000-8,000), several painted stands and dressing tables, a variety of Windsor chairs in old surface, a vibrant chest over two drawers with eye-dazzling yellow and dark green paint (Lot 510, $4,000-6,000), and a tall clock with grain-painted surface simulating elaborate veneer inlay (Lot 513, $6,000-8,000).

The auction’s cover lot is a spectacular, monumental relief carving of a large striped bass, dated 1911, by Massachusetts sporting artist, Leander Allen Plummer, (Lot 628, $40,000-60,000) with family provenance traced back to a doctor from Brookline, Massachusetts, who acquired it from the artist.

Session II closes with a good group of weathervanes as well as folk sculpture, a strong contingent of 19th century paintings, a group of boldly colored painted cast iron targets and doorstops, and about ten items of tramp art with good provenance and publication history. Highlights from this section include a labeled Andrew Clemens sand bottle made from the sands of the Pictured Rocks in Iowa (Lot 747, $8,000-12,000), and a double-sided tavern sign inscribed “UNION HOUSE” (Lot 771, $8,000-12,000).

Auction previews are free and open to the public and held in Marlborough on Thursday, August 11 from 12-5PM; Friday, August 12 from 12-8PM; and Saturday, August 13 from 12-5PM. The print catalog is available for purchase from the Subscriptions Department at subscriptions@skinnerinc.com. Prices realized will be available at www.skinnerinc.com during and after the sale. The Skinner website enables users to view all lots in the auction, leave bids, and bid live, in real-time through SkinnerLive!