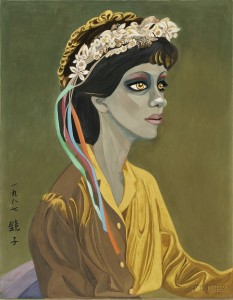 BOSTON, MA – September 8, 2015 –Skinner, Inc. will hold an important Asian Works of Art auction of over 600 lots on Saturday, September 19. Featuring Chinese jades, paintings, and ceramics, Korean traditional and contemporary paintings, and modern Japanese prints and ceramics, the sale will coincide with the annual Fall Asia Week in New York.

An online auction with more than 450 lots selected to complement the live sale will be open for bidding from September 10, 2015 to September 21, 2015. The sale features collections of Chinese snuff bottles and modern Japanese woodblock prints, as well as traditional Japanese prints and ceramics, Chinese paintings and jade carvings.

Judith Dowling, Director of Asian Art at Skinner, notes that: “In addition to the usual offering of Asian fine art in our September sale, we are pleased to present exceptional contemporary works of art.” Leading a strong group of contemporary artworks on the block is a stunning painting by famed Korean artist Chun Kyungja (천경자), A Black Woman in Atlanta, (Lot 466, estimated $650,000 to $700,000). In addition, a selection of paintings by rising Chinese contemporary artists including Liu Guangxia and Wu Tongli will be offered. 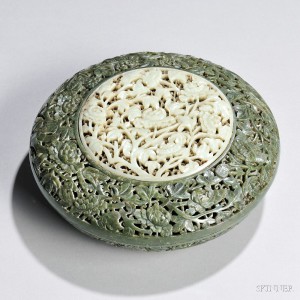 A rare and exemplary 18th century Chinese jade openwork perfumer and cover (Lot 290, $6,000-$8,000) is a highlight from the Chinese jade on offer in September. Traditional Chinese paintings are represented by Lot 496 (estimate $1,000-$1,200), a handscroll depicting figures in a gated garden, in the manner of Qiu Ying (1494-1552). Other areas of interest include a grouping of forty Chinese snuff bottles from two different collections, and several fine textiles that descended through multiple generations of a New England family who resided in China between 1899 and the 1960s. An exceptional collection of reference books on Chinese Art rounds out the sale.

Skinner is proud to be offering the Southeast Asian collection of William C. Rives at auction. A teacher who resided in Singapore and taught at the Singapore American School, Mr. Rives was drawn to the work of 20th Century artists working in Southeast Asia, including Hans Snel, Andre Maire and Rudolf Bonnet.  Leading this collection is a beautiful painting of a River Landscape in Luang Prabang, Laos, by Alix Ayme (Lot 42, $25,000-$ 30,000), depicting the same scene that Ayme also painted on the walls of the Royal Palace at Luang Prabang. This important painting is followed by a portrait of Alix Ayme on horseback, painted by her contemporary Joseph Inguimberty (Lot 43, $15,000-$20,000). 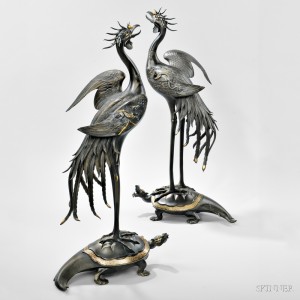 Lot 231, a pair of parcel-gilt bronze phoenixes, is an outstanding example of Japanese metalwork by Muroe Kichibe (1841-1903), and carries a presale estimate of $8,000 to $10,000. A selection of works by important Japanese ceramic artist Tatsuzo Shimaoka, designated a “Living National Treasure” in Japan, include rare early works such as Lot 417 ($2,000- $3,000), a large deep dish decorated with a rope impressed pattern that is recognized as his signature motif. In addition, the September sale includes fine examples of early lacquer boxes, inro, netsuke, modern prints, and early modern ceramics.

Public previews for both sales will be held on Thursday September 17, from noon to 5 PM; Friday, September 18, from noon to 7 PM; and Saturday, September 19, from 9 AM to 10:30 AM. Illustrated catalog #2843B is available from the Skinner’s Subscription Department at 508-970-3240. The catalog is also available at the gallery. Prices realized will be available at www.skinnerinc.com during and after the sale. The Skinner website also enables users to view all lots in the auctions, leave bids, order catalogs and bid live, in real-time through SkinnerLive!

Skinner auctions draw international interest from buyers and consignors alike, with material regularly achieving record prices. The company’s auction and appraisal services focus on fine art, jewelry, furniture, and decorative arts from around the globe, as well as wine, fine musical instruments, rare books, Asian art, clocks, Judaica, and more. Monthly Skinner Discovery auctions feature a breadth of estate material. Widely regarded as one of the most trusted names in the business, Skinner appraisers have appeared on the PBS-TV series, Antiques Roadshow, since the show’s inception. Skinner has galleries in Boston and Marlborough, Massachusetts, and offices in New York City and Coral Gables, Florida, with bidders participating in person, by phone, and online. Join auctions live with SkinnerLive! and Bidsquare. For more information and to read our blog, visit the website at www.skinnerinc.com, find us on Facebook, or follow us on Twitter.