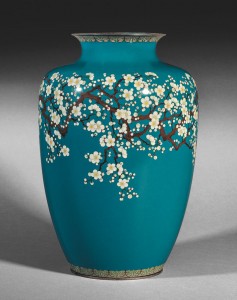 The auction’s top lot is an ovoid form cloisonné enamel vase by Japanese artist Ando Jubei (lot 141, estimated between $20,000 and $30,000). This teal vase is decorated with pale plum blossoms in full bloom and has an Ando mark on its base. An identical vase is in The Khalili Collections.

A large selection of ivory okimono includes two important pieces from a private collection: an okimono of a man with roosters (lot 47, $12,000 to $15,000) and an okimono of a fisherman with two boys (lot 46, $9,000 to $12,000). These exceptional, finely-carved okimono are part of a private collection originally sold to Chester Will Chappell (1845-1909) of New York by art dealers including Yamanaka & Co., New York, Yohimimi & Co., Boston, and Kondo & Co., New York. The family of the current owner acquired these items from the China Gallery in Orange, Connecticut. 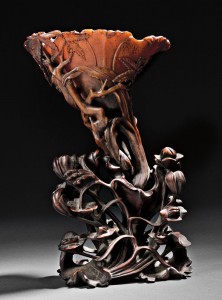 The cup itself portrays a deeply hollowed out lily, the exterior sides carved with an unfurling lily and buds. The custom stand depicts an open lotus blossom. The relationship of the lily and the lotus is auspicious as well as relating to a visual pun. The lily reads “baihe” meaning one hundred years of harmonious union. The lotus reading “he,” harmony, suggests a pun for “harmonious union” as well. The addition of the nandina leaves, which suggest good fortune and many children, make it likely that this cup was made for a wedding ceremony.

The cup descended in the family of John Alexander Ross, the manager of the Crombie Mill, Aberdeen, Scotland, makers of luxury clothing, long favored by royals and international statesmen. It was once part of the contents of Netherton Lodge, the Ross Arts & Crafts manor house decorated with William Morris furnishings and Asian objects acquired from Bluett & Sons, London. 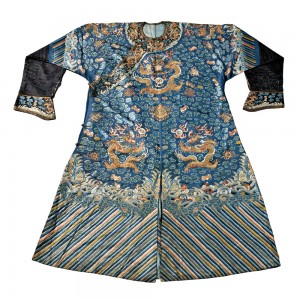 A text catalog for sale #2647B is available by mail from the subscription department at 508-970-3240. It is also available at the gallery.

One thought on “Auction to Feature Art & Artifacts from Across Asia”