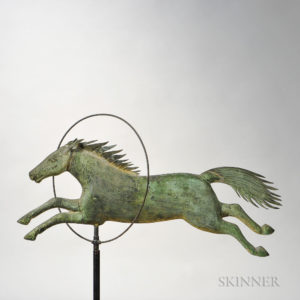 Folk art and fine art, scrimshaw and silver, rugs and relics, pottery and portraits, tables and trade signs: every category of Americana is represented in this auction of more than 700 lots, many from some of the country’s most discerning private collectors.

Some of the predicted top lots in the auction represent a single category of American folk art: weathervanes, many of rare forms and with good surfaces and color, and almost all from a Cornwall, Connecticut, collector’s home. Prime examples are a Molded Copper and Cast Iron Horse Jumping Through Hoop Weathervane, attributed to A.L. Jewell and Co., Waltham, Massachusetts, c. 1852-67 (Lot 17, estimate $25,000-35,000), and a Merino Ewe Weathervane, possibly by A.J. Harris & Co. of Boston (Lot 72, $12,000-18,000). In addition to iconic roosters and horses, there are also a codfish, a setter, a leaping stag, and a running fox.

Furniture is, as always, an important presence. From the Cornwall collector’s house comes an early 18th century New England Black-painted Oval Top Tea Table with an elaborate cut-out skirt (lot 50, estimate $4,000-6,000) Other tables large and small, chests of drawers, chairs, and cabinets, both formal and country, are all well represented by such pieces as a Carved Cherry Scroll-top Chest-on-chest, Connecticut River Valley, c. 1765 (Lot 55, estimate $8,000-12,000). Several of the furniture highlights come from a private mid-western collection, including 18th century chairs from Philadelphia, Boston, Connecticut, and Rhode Island, and a Diminutive Carved Cherry Chest of Drawers with delicately carved ogee feet, (Lot 288, estimate $6,000-8,000).

One of the most desirable items of furniture is also one of the smallest: an Inlaid Walnut Spice Cabinet, Chester County, Pennsylvania, c. 1765-80 (Lot 500, estimate $15,000-25,000). This example is notable for its overall quality and fine proportions. The richly inlaid door opens to reveal eleven interior drawers of varying sizes. 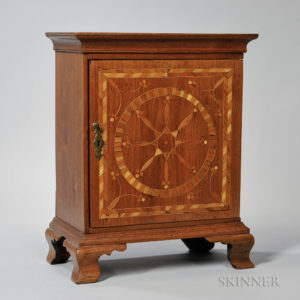 The many paintings in this auction testify to Delacroix’ statement that “the first virtue of a painting is to be a feast for the eyes.” Especially tempting are both portraits and landscapes in a wide range of styles. The menu includes:

Widely regarded as one of the most trusted names in the business, Skinner appraisers have appeared on the PBS-TV series, Antiques Roadshow, since the show’s inception. Skinner has galleries in Boston and Marlborough, Massachusetts, as well as in New York City and Miami, Florida, with bidders participating in person, by phone, and online.