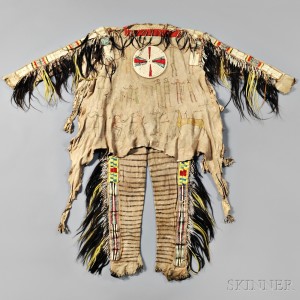 “In this auction, Skinner will be presenting  some of the finest Native American cultural artifacts ever offered in the company’s history,” said Douglas Deihl, Director of American Indian & Ethnographic Art at Skinner. “In addition to the outstanding Plains material in the sale, there are many other fine and unique items drawn from other major tribal cultures, both in North America and beyond.”

The auction will open with a small selection of tribal material including three Yoruba shrine figures, from the Abeokuta area of Nigeria and attributed to the Adugbologe family (Lots 5-7), and an eclectic group of South Pacific material including a Maori Carved Wood Hand Club (Lot 34, estimated between $6,000 and $8,000) and a fine Solomon Islands Feather Money (Lot 29, $6,000-$8,000).

An outstanding selection of Plains Indian material anchors the sale. The highlight of the auction, a circa 1830 Blackfeet Chief’s Shirt and Leggings (Lot 143, $600,000-$800,000) collected by Captain Reymond Hervey de Montmorency, Third Viscount Frankfort de Montmorency, is a rare and remarkable survivor;  only one other similar example is known. (To view an essay by Mike Cowdrey on Lot 143, please visit http://assets.skinnerinc.com/pdf/media/2893B_143.pdf) Also of note is a Rare and Important Plains Apache Woman’s Dress and Moccasins, c. 1850 (Lot 148, $80,000-$120,000) from the collection of Paul Rabut. 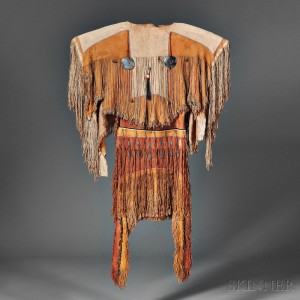 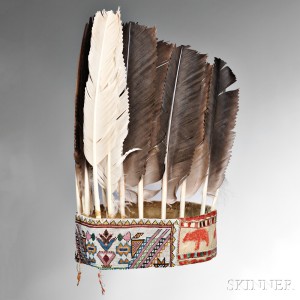 Previews for the auction are free and open to the public. Previews will be held in Boston on Wednesday, May 4 from noon to 5PM; on Thursday, May 5 from noon to 7PM; and on Friday, May 6 from 8AM to 9:30AM. Illustrated catalog 2893B is available from the Subscriptions Department at 508-970-3240 or from the Gallery. Prices realized will be available online at www.skinnerinc.com during and after the sale. The Skinner website also enables users to view all lots in the auction, leave bids, order catalogs and bid live, in real-time through SkinnerLive!

Skinner auctions draw international interest from buyers and consignors alike, with material regularly achieving record prices. The company’s auction and appraisal services focus on fine art, jewelry, furniture, and decorative arts from around the globe, as well as wine, fine musical instruments, rare books, Asian art, clocks, Judaica, and more. Monthly Skinner Discovery auctions feature a breadth of estate material. Widely regarded as one of the most trusted names in the business, Skinner appraisers have appeared on the PBS-TV series, Antiques Roadshow, since the show’s inception. Skinner has galleries in Boston and Marlborough, Massachusetts, as well as in New York City and Miami, Florida, with bidders participating in person, by phone, and online. Join auctions live with SkinnerLive! and Bidsquare. For more information and to read our blog, visit the website at www.skinnerinc.com, find us on Facebook, or follow us on Twitter or Instagram.