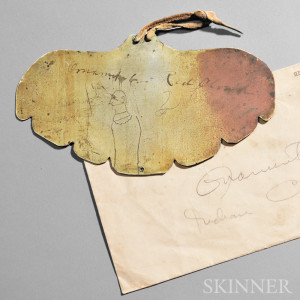 BOSTON, MA – March 2, 2015 – Skinner, Inc. will host an auction of American Indian & Ethnographic Art on March 14th, featuring a wide range of art from Africa, Polynesia, New Guinea and abroad, as well as American Plains Indian material,pieces from the Northwest Coast, Woodlands and Southwest, and textiles and pottery.

“Both new and seasoned collectors will find a variety of intriguing items to match their tastes and budgets,” said Douglas Deihl, Director of American Indian & Ethnographic Art at Skinner. “We’re pleased to offer such a strong selection across the board.”

Plains art accounts for the bulk of the objects available in this sale, with items ranging from moccasins, pipe bags, and coats, to cradles, weapons, pectorals and more.

One outstanding offering is a pair of historic Lakota German silver pectorals owned by famed chiefs Red Cloud and Spotted Tail, most likely given to William Starring, a career military man, by the Plains Indians during treaty negotiations at Fort Laramie in 1866 (Lot 190, estimate $20,000–$30,000). 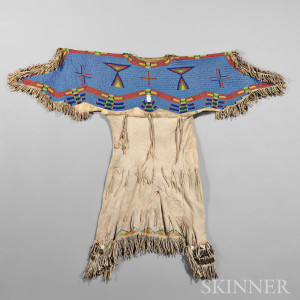 A remarkable example of Plains weaponry, a Central Plains pipe tomahawk, made circa 1870, showcases a blade with a heart-shaped cutout and a handle decorated with brass tacks (Lot 181, $6,000–$8,000).

Northwest Coast material features a range of carvings, textiles and other decorative items, most notably three contemporary polychrome carved wood Hamatsa masks by John Livingston (Lot 261, $10,000–$15,000).  A biography and photograph of Livingston holding one of the two raven masks accompanies this lot. 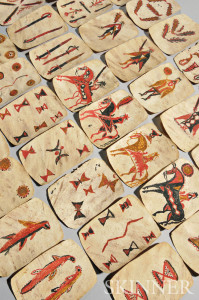 Numerous carved spoons will be available, including a Northwest Coast carved and painted wood spoon with its handle in the form of a stylized human (Lot 253, $1,500–$2,000), and a Northwest Coast carved sheep horn spoon, adorned with totemic animals with inlaid abalone eyes (Lot 257, $600–$800).Another notable carving is a Quinalt/Makah carved whale bone adze handle, which depicts a standing bear at one end (Lot 236, $2,500–$3,500).

American Southwest Indian art is represented by several sought-after pieces. An array of kachina dolls(Lots 263 – 267, estimates vary) will be on the block, in addition to a rare, near-complete set of thirty-nine Apache painted rawhide playing cards (Lot 268, $8,000–$12,000), passed down through a single family since the 1920s.

Intriguing carvings include a large Kongo carved wood power figure from the second half of the 19th century, deaccessioned from the Linden-Museum in Stuttgart, Germany, where it was purchased by Milton S. Fox (Lot 65, $40,000–$60,000). 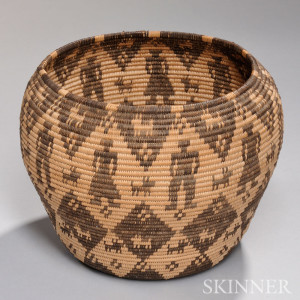 A Chochiti polychrome pottery storyteller figure stands out among a selection of fine pottery at auction (Lot 319, $3,000–$5,000). Exceptional basketry includes a Pomo coiled gift basket from the late 19th century (Lot 352, $5,000 to $7,000), as well as several Apache pictorial creations, highlighted by an Apache pictorial basketry bowl which features bands of human figurines, animals and crosses (Lot 368, $5,000–$7,000).

Previews for the auction will be held at Skinner’s Boston gallery on Sunday, March 12th, from noon to 5 P.M., Monday, March 13th, from noon to 7 P.M., and Tuesday, March 14th, from 8 A.M. to 9:30 A.M. The illustrated Catalog for sale #2791B is available from the Subscription Department, at 508-970-3240, or from the Gallery. Prices realized will be available online, at www.skinnerinc.com, both during and after the sale. The Skinner website enables users to view every lot in the auctions, leave bids, order catalogs and bid live, in real-time, through SkinnerLive! and Bidsquare.