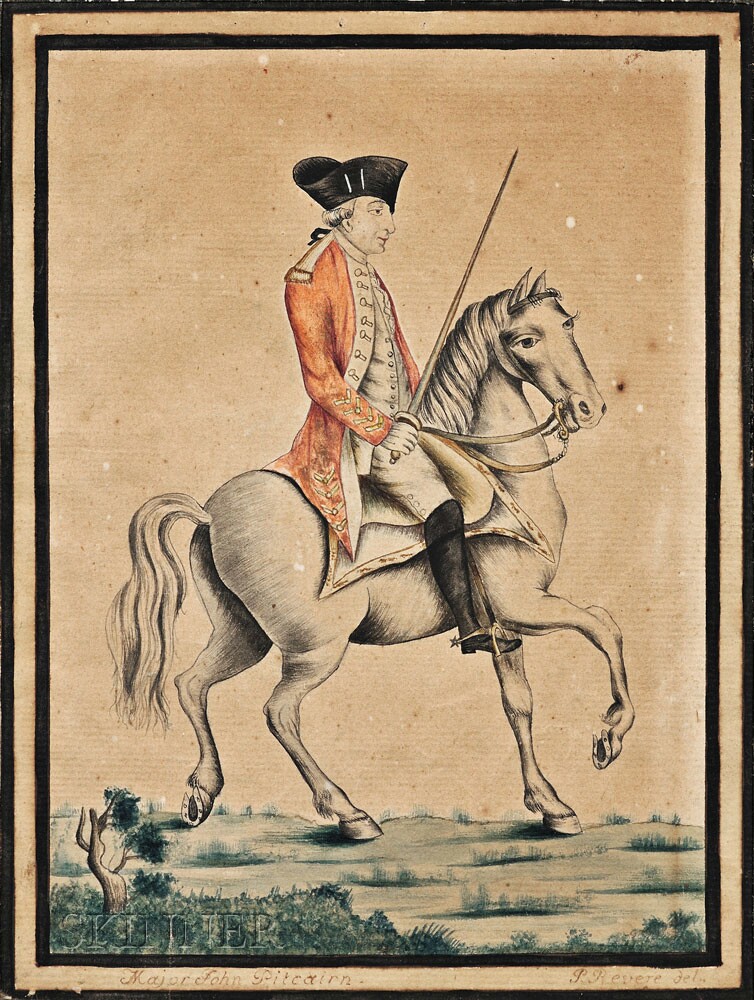 Skinner is pleased to offer an exceptional collection of American artwork, highlighted by Paul Revere, Jr.’s watercolor Portrait of Major John Pitcairn on Horseback (Lot 76, estimated between $20,000 and $30,000). Believed to be a preparatory picture that may have resulted in an engraving, this lot drew the attention of Skinner experts for its scarcity and specificity, capturing the precise details of Pitcairn’s uniform and featuring very fine, carefully drawn lines. Furthermore, the history and significance of Revere’s subject is compelling: Pitcairn stayed at a home in Boston that belonged to Francis Shaw, Paul Revere’s neighbor, when martial law was imposed in the city. According to lore, the locals, including Revere, respected Pitcairn because of his fairness, consideration, and courtesy is settling disputes. It is likely that this small and possibly unique portrait of Major Pitcairn was completed during that time of relative amicability with Paul Revere, before the revolution intervened.

Three Framed Watercolor and Calligraphic Pages of a Young Man’s Problem Book are also of note, reportedly executed by Christian Miller while attending Chestnut Hill Seminary in Pennsylvania (Lot 101, $1,000 to $1,500).

A number of attractive house portraits also stand out in this sale, several arriving from a private collection from Lewiston, Maine. One such item, Portrait of a House with Green Shutters, signed and dated by George McConnell, offers a glimpse into what was most likely a working farm house in Maine (Lot 275, $1,000 to 1,500). Massachusetts is also beautifully represented in Farmhouse with Green Shutters and Four Figures, the auction’s cover lot, an oil on canvas work by George Frank Higgins (Lot 274, $3,000 to $5,000). 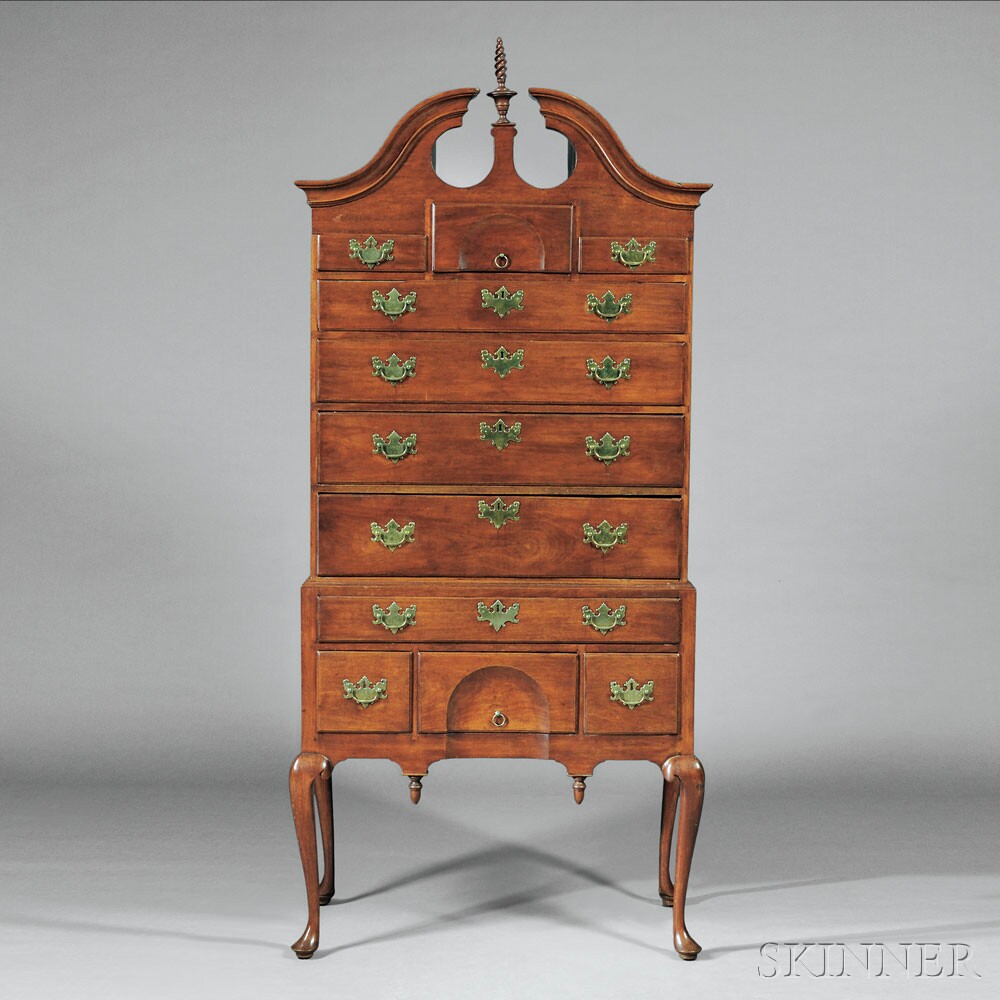 “Skinner is fortunate to be offering a broad representation of the well-designed, quality furniture that was being made in America in the 18th and 19th centuries, from as far south as Baltimore, to as far north as Maine. These works of the cabinetmakers’ art offer the opportunity to enjoy remarkable value at affordable prices,” said Stephen Fletcher, Director of American Furniture and Decorative Arts at Skinner.

Evocative of an era in which elaborate, formal dining was custom is a Set of Twelve Federal Carved Mahogany Shield-back Dining Chairs attributed to Thomas Burling or Robert Carter, c. 1790 (Lot 178, $25,000 to 35,000). There is some speculation that George Washington and Thomas Jefferson owned large sets of similar chairs made by Burling. 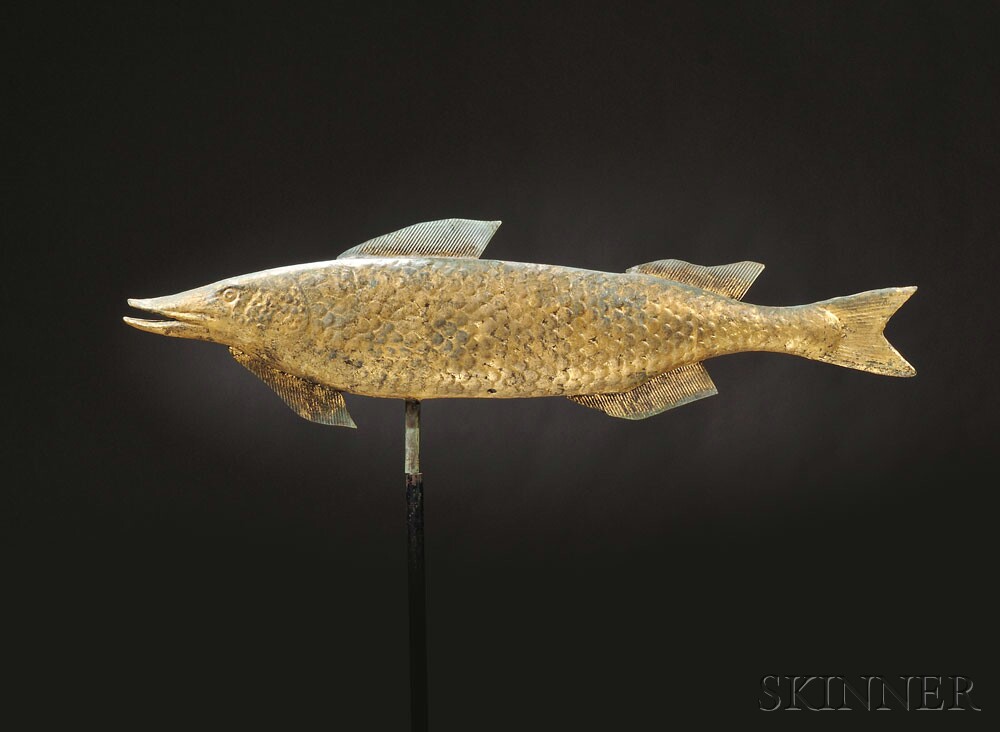 Another exemplary folk art offering is The Royal Psalmist, a signed and titled watercolor on paper by Lucy Douglass (Lot 127, $30,000 to $50,000). Highlighted by a refreshing splash of bright and beautiful color, this work has a history of exhibition, having been loaned to a number of galleries and institutions, including the Museum of Modern Art.

Also sure to please is a Framed Fraktur Birth Certificate (Lot 105, $4,000 to $6,000). An early 19th century watercolor by Rev. Henry Young, this work depicts a young husband and wife with clasped hands and a bouquet of flowers and retains a label from the American Folk Art Gallery, New York. 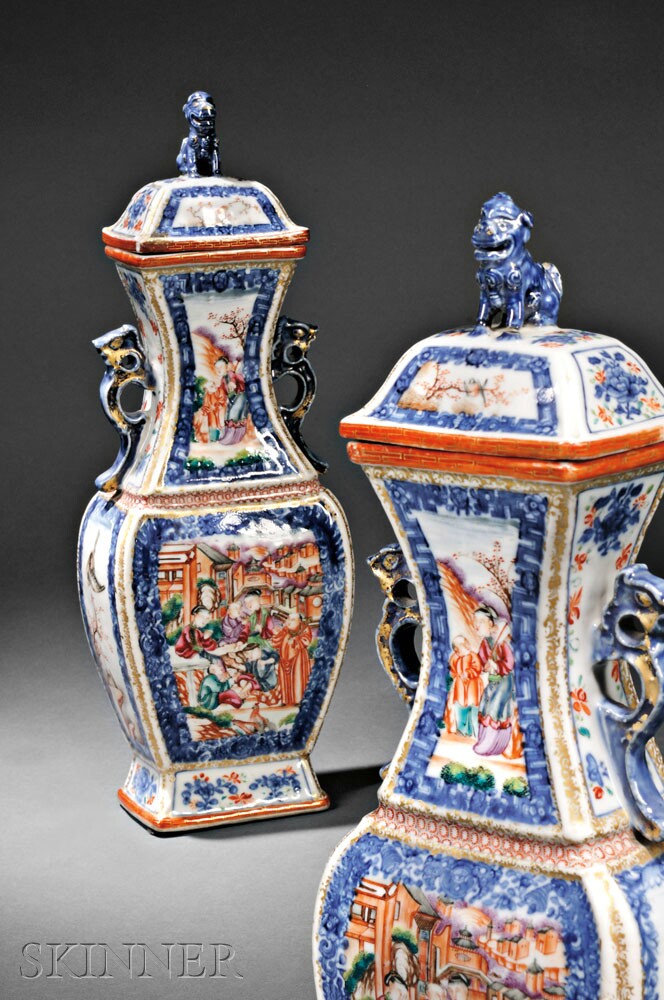 A number of Chinese export porcelain works from the estate of esteemed collector Peter Rosenberg will be available, each showcasing the signature blend of American and Chinese influence.  One stellar example is an 18th century Pair of Chinese Export Porcelain Mandarin Palette Covered Garniture Vases (Lot 44, $2,000 to $2,500), decorated with underglazed blue flowers, birds perched on trees, figures in a landscape and dragon figural handles.

Collectors can also bid on over 200 lots from the convenience of the internet during Skinner’s online-only Americana auction, taking place February 24 through March 3. Skinner specialists have hand-picked the selection of American pottery, textiles, prints, rugs and carpets as items that can be purchased with ease online.  Bidders also have the added value of previewing the online-only lots in person during the regular Boston preview hours.

Previews for the auction will be held on Thursday, February 17, from noon to 5 P.M., Friday, February 28, from noon to 8 P.M., and Saturday, March 1, from noon to 5 P.M. Illustrated Catalog #2710B and 2709T  is available from the Subscription Department, at 508-970-3240, or from the Gallery. Prices realized will be available online, at www.skinnerinc.com, both during and after the sale. The Skinner website enables users to view every lot in the auctions, leave bids, order catalogs and bid live, in real-time, through SkinnerLive!