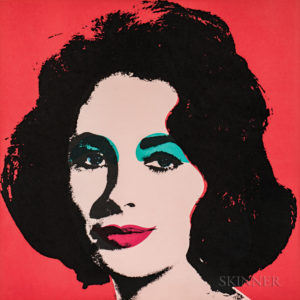 BOSTON, MA – Skinner, Inc. presents a notable two-session auction on Wednesday, September 27, in its Boston Gallery. Fine Prints & Photographs starts at 12PM followed by Fine Paintings & Sculpture at 4PM. Both auctions contain a broad range of fine works of all kinds, offering something for collectors of all mediums, all tastes, and all budgets.

Robin Starr, Director of American & European Works of Art, notes that the prints section is dominated by modern and contemporary offerings. Among the notable lots:

• Andy Warhol, Liz, 1964, an offset color lithograph. Based on a publicity shot for the film Butterfield 8 (Taylor’s first Academy Award performance) it is an iconic image of an iconic celebrity and one of several Warhol works in this auction (Lot 88, $25,000-35,000).

Other offerings in a rich assortment of prints are works by artists from Rembrandt to Rouault, as well examples by James Whistler, Bernard Buffet, Joan Miró, Picasso and many others. 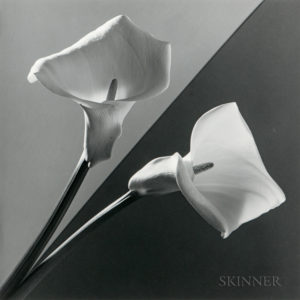 The photographs section of this auction features a spectrum of offerings, from photography’s beginnings in the 19th century to striking images taken in the last few years.

Another modern master with multiple works on offer is the eminent Brazilian photographer Sebastião Salgado. A photojournalist, Salgado has traveled to more than 120 countries for his photographic projects recording global issues of migration, displacement, working conditions, and the environment. Two of his four works on offer are Site of the Now Dried Lake Faguibine, Mali, 1985 (Lot 137, $5,000-7,000), and Bushman, Botswana, 2008 (Lot 140, $4,000-6,000).

Other classic 20th century works include photographs by Harry Callahan, three nudes by Ruth Bernhard, Alfred Eisenstaedt’s harrowing image of workers Repairing the Hull of the Graf Zeppelin During the Flight over the Atlantic, 1934 (Lot 98, $3,000-5,000); and a Yousuf Karsh portrait of the great boxer Muhammad Ali (Lot 120, $5,000-7,000).

Contemporary photograph highlights include, but are not limited to:

Variety and quality distinguish the paintings on offer. Outstanding lots by American artists include: 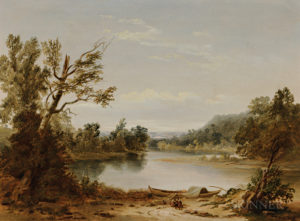 • Washington Allston’s Robbers Fighting with Each Other for the Spoils Over a Murdered Traveler. A leading exponent of the Romantic Movement, Allston was highly regarded for his command of the complex techniques of the Old Masters and his bold use of light and color in depicting his dramatic subject matter in this work dating from 1801 (Lot 250, $70,000-90,000).

• John LaFarge, On the Bayou Teche, Louisiana. This rare early landscape with echoes of the Barbizon style is depicted with the same luscious color sense that distinguishes LaFarge’s famous stained glass (Lot 251, $70,000-90,000).

• Walter Harrison Cady, a well-known illustrator of magazines, children’s books, and newspapers, depicts a lively group of anglers and their woodland observers in Gone Fishing (Lot 279, $20,000-25,000).

• Donald Roller Wilson, living and working in Texas, takes a surreal approach expressed in super-realistic technique, in works such as Patricia, Seeing-eye Dog of Houston (Lot 432, $6,000-8,000).

Artists from around the globe are well represented, in a broad range of styles and subject matter. Highlights include: 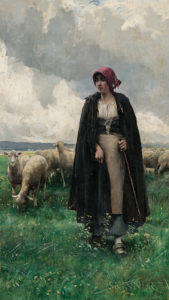 • Julien Dupré, a painter of the French countryside, was widely admired in the late 19th century for his realistic yet lyrical depictions of farm workers in Normandy and Brittany, as in Shepherdess in a Landscape (Lot 230, $12,000-18,000).

• Eugeniusz Zak, much admired in France and Germany until his early death in 1926. His distinctive style was influenced by his contemporaries Picasso and Modigliani as well as by such Renaissance artists as Botticelli. His unique synthesis is shown in his figural silhouettes such as Young Acrobat (Lot 377, $40,000-60,000).

• Tadeusz Kantor, versatile and multifaceted painter, stage designer, actor, and poet, was endlessly inventive and avant-garde in all his work, as in the abstract Untitled (Lot 416, $18,000-22,000).

Among the notable examples of sculpture offered in this auction are: 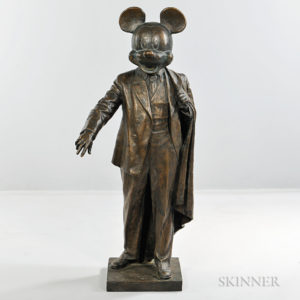 • Alexander Kosolapov, Mickey-Lenin (Lot 434, $25,000-35,000). The artist finds ample material for his social commentary in both Russia and the United States. His “Sots” or socialist pop art works combine iconic figures from each culture into thought-provoking statements like this one, drawing ironic parallels between Soviet communism and American materialism.

• Henry Merwin Shrady, in George Washington at Valley Forge, makes a more straightforward comment, in a piece that won the competition for an equestrian statue for the Continental Army Plaza in Brooklyn (Lot 277, $2,000-4,000).

• David Hayes, Ritual Object (Lot 410, $700-900). A 1964 bronze by the respected sculptor widely known for his monumental welded steel abstract painted sculpture, this work was part of the Lending Service of the Museum of Modern Art, New York. Hayes was a student and colleague of David Smith and friend of Alexander Calder.