Jane Prentiss, Director of 20th Century Design, notes that over 500 lots have been organized chronologically, from iconic Arts & Crafts items through art deco, mid-century modern in all its manifestations, post-modern and contemporary pieces.

There is something to fit every mood—elegant, practical, funky, serious, playful—as well as every collecting category. The complete expression of design in the 20th century is included, with works from iconic names, lesser-known masters, and designers and craftsmen who will be the famous names of the future. The sale includes several tightly focused collections of material that is fresh to the market.

Nan Edwards’ collection of art glass is particularly rich in Tiffany and French and English cameo glass in a wide variety of forms and colors. 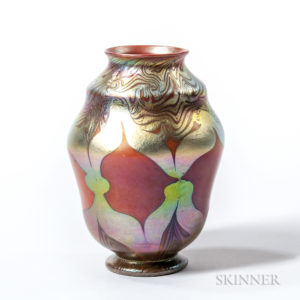 Furniture, the keystone of interior design, is a major component of this sale. The Kanin collection centers on the work of one man, Jens Risom. The Copenhagen-trained Risom worked in the United States from 1939 through the 1960s. His large output through his collaboration with major American companies and later his own manufacturing company helped introduce Scandinavian modernism to this country.

Jane Prentiss comments that is rare to find a home furnished exclusively with the work of a single designer; the Kanins’ many Risom pieces were mindfully acquired and lovingly used. 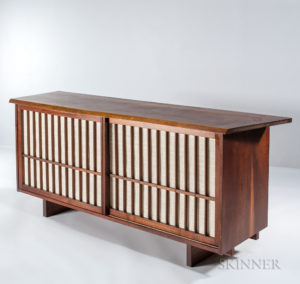 Another studio piece, one of four commissioned by the Danby Radio Corporation of Philadelphia is a George Nakashima Cabinet, walnut, natural fiber cloth, 1957. Originally designed as a radio cabinet with open back for the release of heat, back later closed for use as a credenza. The historical integrity of the piece has been maintained. (Lot 354, estimate $15,000-25,000) 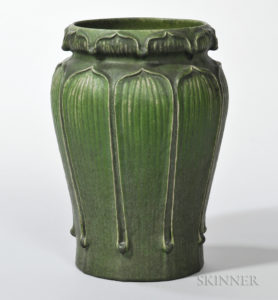 • Roseville Futura Tank Vase, Zanesville, Ohio, c. 1934. This sought-after line of Roseville is distinctive for its adventurous palette and art moderne shapes. (Lot 60, estimate $8,000-10,000)
• Large Makoto Yabe (1947-2005) Nerikomi Blue Pottery Bowl, Massachusetts.
Layers of clay stacked and turned to create the same colors on the interior and exterior. Makoto Yabe was born into a conservative Japanese pottery dynasty and trained in the traditional Japanese manner. After he moved to the United States, his technical mastery and inventive designs made him a revered and influential teacher. (Lot 367, estimate $3,000-4,000)

The automobile epitomizes much of the spirit of the 20th century: innovative in design and materials, symbolic of mobility and adventure. So a fitting close to this auction is the Baby Bugatti Electric-powered Child’s Car Replica, Netherlands. Enameled aqua blue aluminum shell, rubber tires, leather seat and straps, electric motor. This modern replica is after a 1927 design by Ettore Bugatti for his 5-year-old son. (Lot 561, estimate $6,000-8,000) 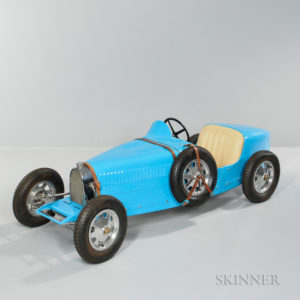 Previews, Catalogs, and Bidding
Auction previews are free and open to the public. Print catalogs may be purchased at subscriptions@skinnerinc.com. Prices realized will be available at www.skinnerinc.com during and after the sale. The Skinner website enables users to view all lots in the auction, leave bids, and bid in real time. Bidders participate in person, by phone, and online. Join auctions live with SkinnerLive! and Bidsquare.

About Skinner
Skinner auctions draw international buyers and consignors, with material regularly achieving record prices. The company’s auction and appraisal services focus on fine art, jewelry, furniture, and decorative arts from around the globe, as well as wine, fine musical instruments, rare books, Asian art, clocks, Judaica, and more. Skinner Discovery and Irresistible Unreserved auctions feature a breadth of estate material.
One of the most trusted names in the business, Skinner appraisers have appeared on the PBS-TV series, Antiques Roadshow, since the show’s inception. Skinner has galleries in Boston and Marlborough, Massachusetts, as well as in New York City and Miami, Florida. Learn more at www.skinnerinc.com and find us on Facebook, Twitter, and Instagram.