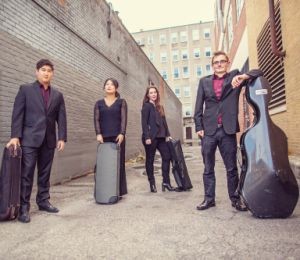 Reception 5:30-7PM
Free and open to the public

As chamber musicians, members of the quartet have performed across three continents at venues such as the Lincoln Center, the Kennedy Center, and the Sydney Opera house, and have performed alongside such musicians as Steven Dann, Huw Watkins, Merry Peckham, and Laurence Lesser. They have attended music festivals such as the Ravinia Steans Young Artist Program, Lucerne Festival Academy, the Perlman Music Program, the Taos School of Music, Kneisel Hall, Domaine Forget, Meadowmount School of Music, Prussia Cove, the Seiji Ozawa International Academy, Morningside Music Bridge, the Sibelius Academy, and the Music Academy of the West. Harriet Langley studies with Miriam Fried, Brian Hong studies with Donald Weilerstein, Alexander Hersh studies with Laurence Lesser, and Jing Peng studies with Kim Kashkashian, who also coaches the quartet. The Vasari String Quartet will perform at The Center for Arts Natick in April as well as on tour in Chicago in May, culminating in a full recital in NEC’s Jordan Hall in May, 2015.