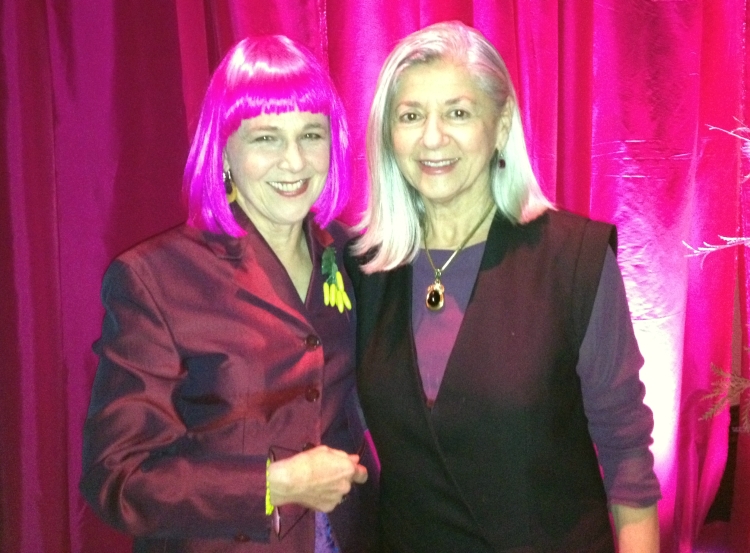 Karen Keane, Skinner CEO, with Gloria Lieberman, Vice President, at the opening of Zandra Rhodes: A Lifelong Love Affair with Textiles at the Massachusetts College of Art and Design

Last week, Karen Keane and I met designer and fashion icon Zandra Rhodes for the first time at a lovely opening reception for the exhibit  Zandra Rhodes: A Lifelong Love Affair with Textiles at the Massachusetts College of Art and Design. If you haven’t seen it yet, stop by – the show is on display until December 1, 2012.

With her bright pink hair and bold, hand-painted garments, Zandra is impossible to ignore and has exerted her influence on the textile and clothing design world since the 1960s. She was influenced by the Arts & Crafts movement of the late 60s and early 70s and also by the cultural exchange between East and West. As the Beatles traveled to India, and Ravi Shanker played his sitar in the United States, Zandra Rhodes was hand-painting fabrics with bold, colorful, organic and asymmetrical designs.

“I started to do designs with light bulbs and lipsticks, and linking up to the Warhol of everyday things,” Rhodes told the Boston Globe in an interview about the MassArt exhibit. “I started thinking that fabrics could be much more exciting, they could be dynamic.” 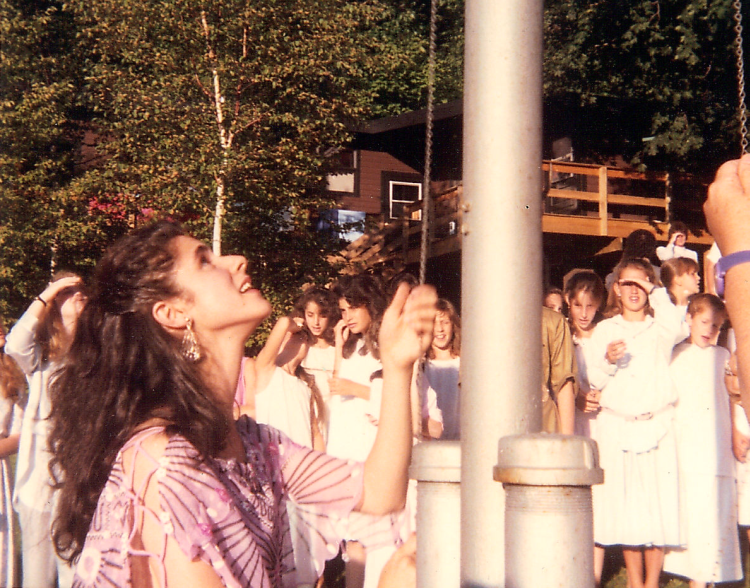 When I met Zandra, I told her the story of my experience with one of her designs — a flashy pink and violet dress that I bought at Filene’s basement in the early 1970s. At $69, the dress was a big purchase at the time, but the design and colors drew my eye. It was hand-painted with an American Indian theme, including little feathers and beads. I didn’t know when I would wear it, or how, but I loved it as an art piece.

While on vacation with my family soon after buying the dress, I put it on and walked out to join my parents for dinner. My father took one look and told me I had to change. The sides of the dress tied with ribbons, and he felt it was too revealing. That was the only time I wore the dress myself, but many of my friends, family, and even colleagues have found occasion to borrow it. My daughters wore it to a purple-themed camp banquet, and when Karen Keane needed something to wear to a wedding reception in 1982, I told her I had the perfect dress. It takes a certain degree of daring to wear this dress, and Karen pulled off the look flawlessly.

Clothing defines an era as much as its art, music, or literature, and in 2013, the Museum of Fine Arts will host an exhibit tentatively titled “Hippie Chic,” featuring  fashions from the 1960s. My dress is on loan to the museum for display in the exhibit.

The Massachusetts College of Art and Design and the Museum of Fine Arts Boston show us that fashion captures the essence of a time. I treasured my Zandra Rhodes dress, and I’m glad to have the opportunity to share it with others. Do you have a favorite fashion blast from the past? Share a picture with me.