This post continues a series of stories behind some of the top highlights in Skinner auctions from the past decade. Through telling these stories, we hope to shed light on where the market has been and where it’s going now. 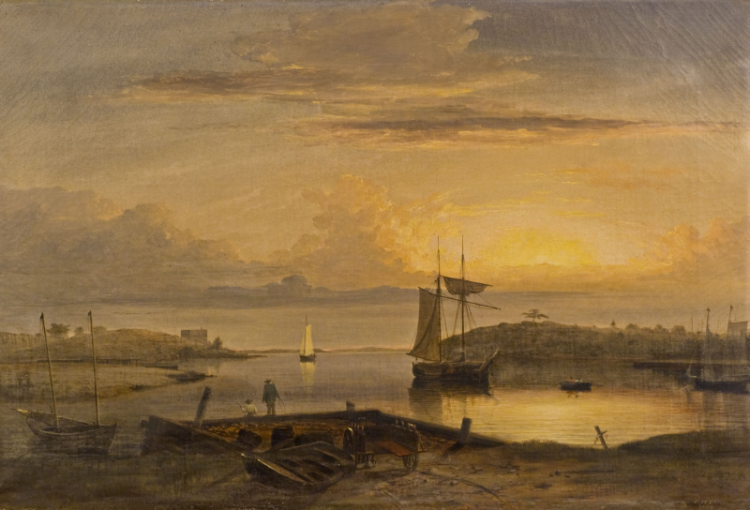 Skinner still holds the world record for a work by artist Fitz Henry Lane, set when Manchester Harbor sold for $5.5 Million in a Skinner American & European Paintings & Prints Auction in Boston in November 2004

Lane was born in 1804 in Gloucester, Massachusetts, and spent much of his youth sketching the Cape Ann shore, north of Boston. He also seems to have undergone two name changes, only one of which was of his own doing. He was born Nathaniel Rogers Lane. As a young man he changed his name, possibly to differentiate himself from the well-known miniature painter Nathaniel Rodgers. He apprenticed with William S. Pendleton, the Boston lithography firm, in the early 1830s, specializing in topographic views. At this time, he began signing his works “F.H. Lane.” Lane fell out of favor with collectors in the late 19th century, and remained that way well into the 20th century. As of the 1930s, if scholars considered Lane at all, they considered his name to be Fitz Hugh Lane. In fact, when Manchester Harbor sold in 2004 this was still thought to be the case. It was not until 2005 that researchers in Gloucester, Massachusetts rediscovered the 1831 letter Lane had written to the Commonwealth of Massachusetts requesting
a name change to Fitz Henry Lane.

Whether you call him Nathaniel, Hugh, or Henry, the artist probably saw the works of Robert Salmon and Washington Allston in Boston in the early 1840s. It was at this time that he decided to concentrate on painting. The paintings of the late 1840s and early 1850s reflected Lane’s earlier graphics training, in conjunction with the influence of the marine artists of the earlier generation. As is apparent in Manchester Harbor, the foreground details with its figures, piers, and spits of land, the scale for the work while accentuating the vastness of the view and its light. The low placement of the horizon line allows for an expansive sky. Tinted with the warm hues of sunrise and reflected in the calm waters, the light becomes the focus of the work, as is typical of Luminism.

The horizontal arrangement of the composition creates stillness in spite of the great, varied activity of the foreground. In conjunction with the concentration of light around a sun viewed through clouds just above the horizon, Manchester Harbor foreshadows the increasing calm and poetry of Lane’s mature Luminist style as it would emerge in the late 1850s.

From my experience as an appraiser of fine paintings and prints for Skinner and on Antiques Roadshow, I know how rare it is to find a masterpiece like this one. Every time I sell a fabulous painting at auction, I wonder how many more there can be left to find? But I know there are many more amazing finds out there.

If you have an exceptional painting or print by a well known artist, and would like me to take a look, please call and set up an appointment at 508-970-3299.