BOSTON, MA – Skinner’s 20th Century Design auction on December 15 at 12PM features an impressive array of decorative arts and furniture from early 20th century through contemporary design. The auction of over 390 lots presents design collectors and enthusiasts much to appreciate, with strong collections of Art Deco design, mid-century American Modern, Danish mid-century and early 20th-century pieces on the block.

A sampling of late nineteenth-early twentieth century ceramic art tiles from an extensive special collection opens the auction. Many of these exquisite tiles were created by top tile makers of the late nineteenth century, such as, Low Art Tile Works and the American Encaustic Tile Company. Highlighting the collection are four J.G. & J.F. Low seasonal portrait tiles from 1885 (Lot 2, Estimated between $300-500) depicting all four seasons as goddesses and glazed in shades of teal green.

The auction also features a standout selection of playful ceramic plates and bowls by Pablo Picasso, many from the mid-1950s. A colorful visage bowl (Lot 237, $1,000-1,500) hand-decorated in black and green engobes and brick red under glaze highlights the Picasso grouping. 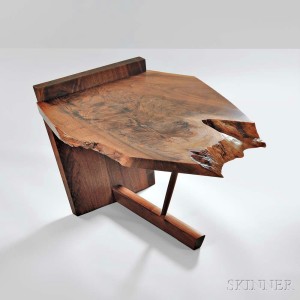 Skinner is pleased to offer a group of modern furniture by George Nakashima from several private collections. Nakashima aimed to express the energy of the whole tree through the objects he created, believing that “Trees have a yearning to live again, perhaps to provide the beauty, strength and utility to serve man.” An extraordinary example is a low table, 1976, cut from a slab of American black walnut (Lot 250, $20,000 to $30,000). 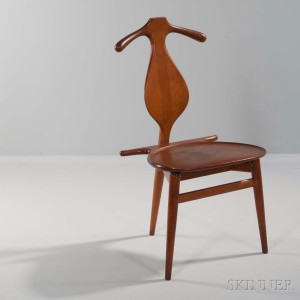 Buyers and collectors drawn to classic design, beautiful wood, and quality craftsmanship, will be interested in a grouping of furniture by Hans Wegner. Superb creations by Wegner include a teak, oak, brass, valet chair c. 1958 (Lot 186A, $5,000-7,000), as well as five round chairs featuring one of Hans Wegner’s most iconic designs (Lot 177, $3,500-5,500). Other works on offer include designs by Poul Jeppesen, Axel Salto, Arne Jacobsen, Verner Panton, Kofod Larsen, Great Jalk, Hennigsen and Thomas Moser.

Other auction highlights include, but are not limited to:

Auction previews are free and open to the public and held in Boston on Wednesday, December 14 from 12-8PM and Thursday, December 15, from 8-10AM. The print catalog is available for purchase from the Subscriptions Department at subscriptions@skinnerinc.com. Prices realized will be available at www.skinnerinc.com during and after the sale. The Skinner website enables users to view all lots in the auction, leave bids, and bid live, in real-time through SkinnerLive!