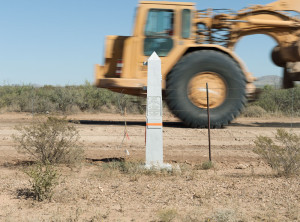 If you enjoyed the recent National Public Radio series Borderland: Dispatches from the U.S.-Mexico Boundary, you might be interested in the work of Arizona-based photographer David Taylor currently on view at Harvard University’s David Rockefeller Center for Latin American Studies.

The exhibition, which I initiated when I worked as a curator at the Harvard Art Museums, presents Taylor’s two-part project Working the Line. Taylor initially set out to photograph the 276 monuments marking the U.S./Mexico border between El Paso/Juarez and San Diego/Tijuana. Many of the boundary monuments, in the form of obelisks marked with inscriptions or identified by plaques, were erected in the 19th century. Some of the monuments remain isolated in the desert next to ineffective barbed wire fences, while others are dominated by massive metal barriers which clearly reflect a more recent history.

While documenting the boundary monuments, Taylor observed activities that reflect the complexity and challenges of life on both sides of the border. These observations became the basis for the second part of his project, a series of photographs which are suggestive and nuanced, capturing the traces and evidence of drug busts, human smuggling routes, ongoing construction, and border security activities. As Taylor writes in his artist statement, the photographs are intended to “portray a highly complex physical, social and political topography during a period of dramatic change.”

When I first saw Taylor’s work in 2011, I was immediately drawn to his evocative photographs and their layered complexity. I was first intrigued by his ability to compose beautiful and powerful images. I also admired the strength and consistency of his documentary project, a typological survey of border markers as archaeological artifacts that grew into an overview of activities that occur around and as a result of the dividing line of the border. Finally, his images evoke the powerful history of the border and the role that it has played and continues to play in U.S./Mexico political, social, and cultural relations.

Border fences act as physical and metaphorical barriers and serve as a vehicle through which the Mexican and American governments attempt to control the problematic activities associated with the border, including illegal immigration and drug smuggling. However, when the boundary was established in 1848 in the aftermath of the Mexican-American War, there were no fences or barriers, and officials were occupied with collecting customs duties rather than tracking migrants or drug runners.

The International Boundary Commission placed the original markers in different stages between the 1850s and 1880s. In the east, the Rio Grande delineated the border, but in the west, these markers established a dividing line. The transformation of the border began almost immediately after its creation, as border towns were established to respond to economic development and the regulation of commercial enterprises and social exchanges became the norm. By the early 1930s, heightened restrictions and security concerns about illegal immigration and drug smuggling created the modern border, the legacy of which we are still addressing today.

In capturing these historic markers isolated in the desert and amidst contemporary settings, Taylor’s photographs collapse time in a very effective way. On the one hand, they clearly demonstrate the physical vastness and porosity of the border. More broadly they reflect both individual and larger social conflicts and the friction that arises from these two nations as they come together across a common border.