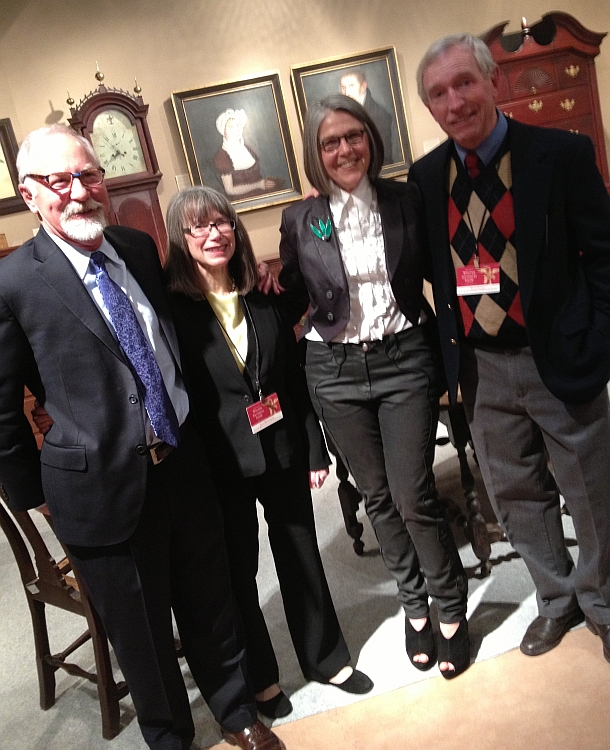 When I walk into the Winter Antiques Show each January, it’s hard to know where to begin. Booths buzz with conversation, and beautiful objects and designs compete for my attention.

The event is one of America’s premier antique shows. The most prestigious dealers from around the country must pass a rigorous vetting process to ensure the high quality of the show’s offerings year after year. I always attend to view the beautiful items on display, experience the atmosphere, and catch up with longtime friends. This year’s highlights for me included objects spanning three centuries.

Peter H. Eaton and Joan R. Brownstein shared a booth devoted to Americana. Joan collects folk portraiture and Peter specializes in furniture. They both focus on condition, surface and rarity. This year, I was pleasantly surprised to find Joan moving toward the 20th century with a collection of Scheier pottery from New Hampshire. Delicately decorated with encised designs, the 20th century pottery perfectly complements her elegant, refined taste.

At Allan Katz’s booth, a 19th century carved wood panel of a California golden bear caught my eye. I am both a folk art and natural history enthusiast. A skilled carver fashioned the bear’s likeness in wood and paint. He appears to be climbing through the transom window of a door. It is poignant homage to a now-extinct species. (Good news: No bears were harmed during the making of this sculpture!)

Peter Pap presented an extraordinary collection of oriental carpets and rugs. When I asked if he had any rugs that would compliment mid-century modern furniture, he showed me a Swedish rug by designer Marta Maas. The rug was a soft beige and pastel palette with pile construction, adorned with a folk-inspired drawing based on traditional middle eastern motifs such as geometric and floral forms.

The show dealers put their very best material aside for this fair, and this year’s display was no exception. I left feeling inspired and excited to be a part of a vibrant community of antiques and art enthusiasts.

The show benefits the East Side House Settlement, a social service organization providing access to education and training to families in the South Bronx, and this year it runs from January 25th and through February 3rd.

Are you attending this year or have you attended in the past? What stood out to you during your visit?