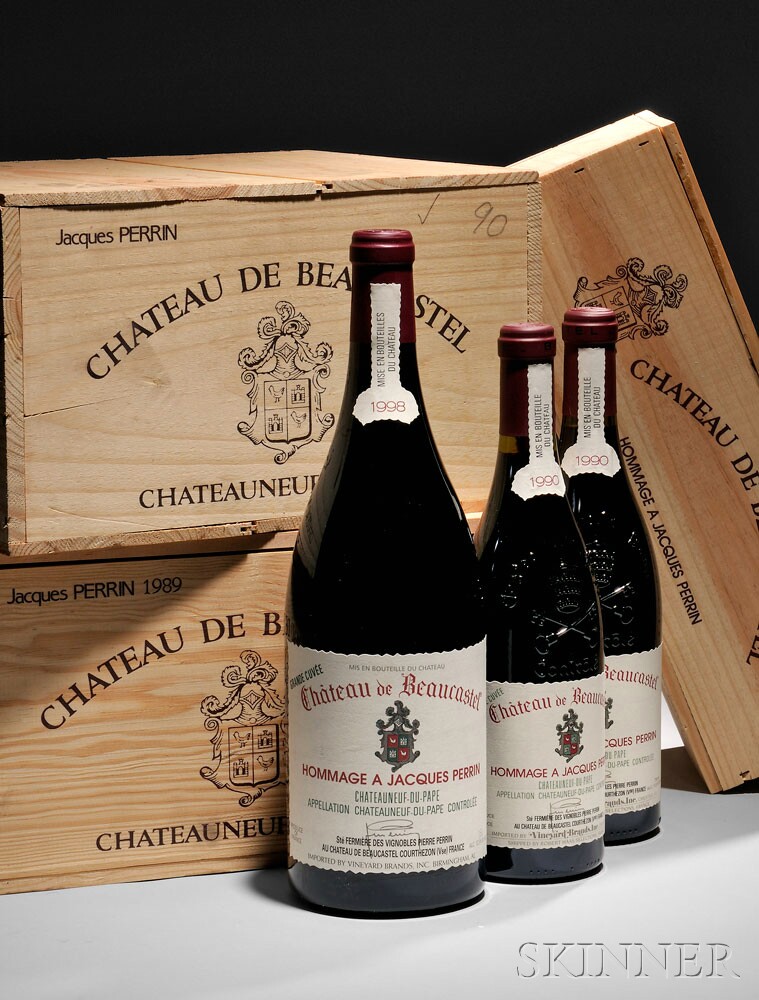 In the far, northern reaches of Chateauneuf du Pape sits the Chateau de Beaucastel. Named for the Beaucastel family, who  purchased the land in 1549 as an agricultural venture, the property has a history of winemaking dating back to 1792. At the turn of the 20th century, phylloxera ravaged vineyards across the French countryside, and then-owner Elie Dussaud decided to sell the vineyard rather than replant and start over. So in 1909 Pierre Tramier took control and oversaw the replanting efforts before leaving the vineyard to his son-in-law, Pierre Perrin. Pierre, and later his son Jacques, built the estate we know as Beaucastel over the next seven decades. Today, the estate is run by Pierre’s grandsons, Jean-Pierre and Francois, with the fourth generation of Perrins by their sides.

The property is one of the largest in Chateauneuf du Pape at 130 hectares, with 100 hectares planted to vine. Approximately 75% of the area planted to vine falls within the AOC of Chateauneuf du Pape with the balance lying just to the east of the border. This smaller section outside of the AOC produces the grapes that will become Coudoulet de Beaucastel, which is bottled as AOC Cotes du Rhone. Like many estates in Chateauneuf, Beaucastel’s vineyards are covered with the galets – large stones that retain the day’s heat and keep the grapes warm through the night while also helping the soil retain precious water.  Also, the mistral winds are strongest where the vines are oldest and keep the vines clean and dry. It is also worth noting that the vineyards have been cultivated organically since the 1960s.

Beaucastel remains one of the few estates to include all 13 allowed varietals in their red wine – and the only to grow all 13 on their own property. Typically, the estate’s Chateauneuf du Pape Rouge is composed of 30% Grenache, 30% Mourvedre, 10% Syrah, 10% Counoise, 5% Cincault and the balance consists of Vaccarese, Terret Noir, Clairette, Muscardin, Picpoul, Picardan, Bourboulenc and Roussanne. This is an unusually high proportion of Mourvedre for Chateauneuf, where Grenache typically dominates the blend. The wine is fermented in large, oak vats and aged in the bottle for a year prior to release.

Beaucastel also releases a pair of white Chateauneuf wines. The first, simply labeled as Chateauneuf du Pape Blanc, is a cuvee of 80% Roussane, 15% Grenache Blanc and the balance a blend of Picardan, Clariette and Bourboulenc fermented eight months mostly in stainless steel tanks and partially in oak barrels. A special bottling of Chateauneuf du Pape Blanc Vieilles Vignes is composed entirely of old vine Roussanne harvested slightly over-ripe. The vines all originate in one of the first plots replanted by Pierre Tramier in 1909, a 3 hectare area generating a miniscule 6,000 bottle production annually.

The estate produces an even more special wine, but only in exceptional years. The Chateauneuf du Pape Hommage a Jacques Perrin, named for the second generation Perrin who passed away in 1978, has been released 16 times since the first vintage in 1989. With an even higher proportion of Mouvedre than the standard cuvee – often 60% – Hommage has received a staggering five scores of 100 from renowned critic Robert Parker.

Across the A7 highway from the Chateauneuf holdings lies the Coudoulet vineyard in AOC Cotes du Rhone. With virtually the same soil profiles, temperatures, cultivation techniques and careful attention to the vines, Coudoulet de Beaucastel is an excellent opportunity for an introduction to Beaucastel, though most vintages will include just a handful of the 13 grapes. In 2002, a notoriously difficult vintage for the red varietals, Coudoulet is largely composed of declassified Chateauneuf juice as no Beaucastel Rouge was released.

Beaucastel is well-represented in the Skinner Fine Wines auction on February 25th. With 17 lots of Beaucastel Rouge over 12 vintages in a variety of formats, 4 lots of 100-point vintages of Hommage, mature Beaucastel Blanc, an original wooden case of their Roussanne Vieilles Vignes cuvee and a vertical of Coudoulet spanning three decades. Also, don’t sleep on lot 297, another offering from the Perrin family from their holdings in Vinsobres from nearly century-old Grenache and Syrah vines.

One thought on “Wines of the Chateau de Beaucastel”