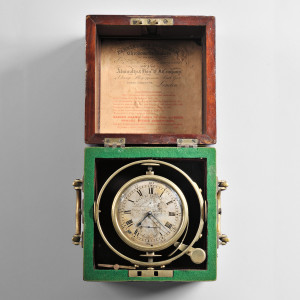 For hundreds of years, mariners sailed the vast oceans knowing their position north or south of the equator (latitude), but could not determine their distance east or west of the prime meridian (Greenwich, England), or longitude. One can imagine the deadly consequences of knowing only one of these. Despite many crazy theories and attempts to determine longitude, an accurate timekeeper capable of keeping time under the difficult conditions found at sea seemed to provide the answer. Author Dava Sobel tells the story of John Harrison and his efforts to produce such an instrument in her best-selling book, Longitude. Late in his life, c. 1760, Harrison finally produced a timekeeper accurate within the suitable range to allow a navigator to calculate longitude at sea. The marine chronometer was born.

Used to display the time at the prime meridian (zero degrees longitude at Greenwich), the marine chronometer held a highly respected place on board ships as late as WWII. Knowing both Greenwich  time and the “local” time, which could be determined on board the ship with a sextant, the navigator could determine the longitude, the distance east or west of the prime meridian. (We’ll save the simple math for a later blog post.) For many years before, latitude was easily determined with a variety of other instruments, predominantly the sextant. With this instrument, the navigator could “shoot the stars” and determine the latitude, or the distance north or south of the equator. With longitude and latitude calculated, the captain knew exactly where he was, saving both  lives and cargo which might have been lost before longitude could be ascertained. The invention of the chronometer propelled Britain to worldwide prominence in both naval and mercantile spheres well into the 20th century.

Among the famous chronometer making families in the late 18th and early 19th centuries were the Frodshams. William Edward Frodsham was the son of William James Frodsham and a student of Parkinson & Frodsham. The present example, Two-day Marine Chronometer, No.  1 (Lot 209, Estimate $4,000- $6,000) reflects this relationship, being signed on the dial: “ Will(m). E(d). Frodsham eleve (student of) Parkinson & Frodsham, Change Alley, London, No. 1.” It is interesting to note that William Edward was probably only about 20 years old when he made this chronometer and died a year or so later from drowning while bathing. This rare chronometer was used on voyages of exploration to the Arctic Circle in 1823; to Spitzbergen, Norway; and to Repulse Bay, Canada in 1824. Its whereabouts since 1900 were unknown until recently discovered by Skinner.

William Edward Frodsham’s second chronometer traveled in much more temperate climates. No. 2 served 80 years with the Royal Navy, including service on the HMS Beagle carrying the young naturalist Charles Darwin on a five year voyage. Darwin’s notes on this voyage eventually were produced as On the Origin of Species.

It is rare that early 19th century marine chronometers are found today with known histories. One with a known history, the first made by a famous but short-lived maker, and one tied so closely with another by this maker used on a Darwin voyage, is a remarkable discovery which will delight collectors of precision horology and scholars of maritime history.

We are pleased to off this fine lot as part of our fall Clocks, Watches & Scientific Instruments auction (2857M) on Saturday, October 31st in Marlborough, Massachusetts.