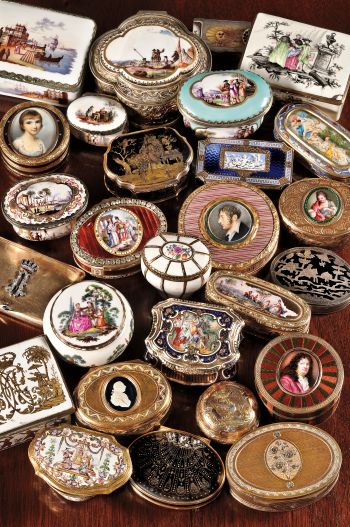 A collection of English, French, and German snuff and patch boxes from the October 2010 Skinner Auction of European Furniture & Decorative Arts

Collecting is an age-old hobby, a passion to buy, hunt for and accumulate treasures. But it seems that the drive to collect beautiful things has disappeared, primarily with the forty and under crowd. They appear to be far more interested in gadgets than objects.

You may argue that serious collecting doesn’t begin until one has gone through college, married, and had children and a house. Maybe you have to be in your mid-40s to decide to invest in a collection. But that doesn’t seem right. I started collecting before I was ten.

Back in the early 60s, kids collected baseball cards, dolls, stamps, coins (who didn’t have those little blue books?), Tonka toys and so on. Today what do they collect? Video games, Facebook friends, and iPhone aps.

I believe that collecting is a bug that you catch early on and continue to nurture through adulthood. It’s no surprise that so many collectors that I know and have known have more than one collection at home. They may collect English furniture, have a collection of inkwells, a number of nice portrait miniatures and an assortment of toby jugs. I’ve had consignors whose collection was selling in the first part of an auction, and then who started bidding in the second half. Asked about it, they simply stated that they thought they’d start collecting again!

There is a social side to collecting, and these groups are missing young blood. Collectors societies focusing on pipes, fans, steins, pattern glass, a wide variety of ceramics, dolls, open salt cellars, you name it, flourished in the 1950s right through to the end of the century.  If these groups aren’t already gone, they are aging terribly.

Along with other ceramics groups, I’ve been a member of the Wedgwood International Seminar for many years. Held annually in various locations throughout the US, Canada and the UK, members from across the US and as far away as Australia (there are three Wedgwood Societies there) can socialize, share thoughts, enjoy lectures, eat, drink and be merry together. Many form lifelong friendships, and even after I’ve sold their Wedgwood collections, they continue coming for camaraderie. Even so, the populous of the Wedgwood Seminar has declined over the years. Event attendance in the 1960s often topped at over 300.  Today, depending on the venue, 80-120 is good, and with no young faces!

There’s no reason to believe that there won’t be a renewed spark among young people to collect, and perhaps avenues such as Twitter and Facebook can help connect older collectors and various collectors societies with the younger generations.

Reversing this declining membership trend is vitally important to the future of collecting. Is there a short term answer, no.  Would I encourage you to join a collectors society, absolutely.

43 thoughts on “Where Are all the Young Collectors?”