Both novice and seasoned collectors of Modern Design often ask me the question, “What’s hot right now?” My answer this summer is the bright, bold, contemporary charm of Clarice Cliff pottery. 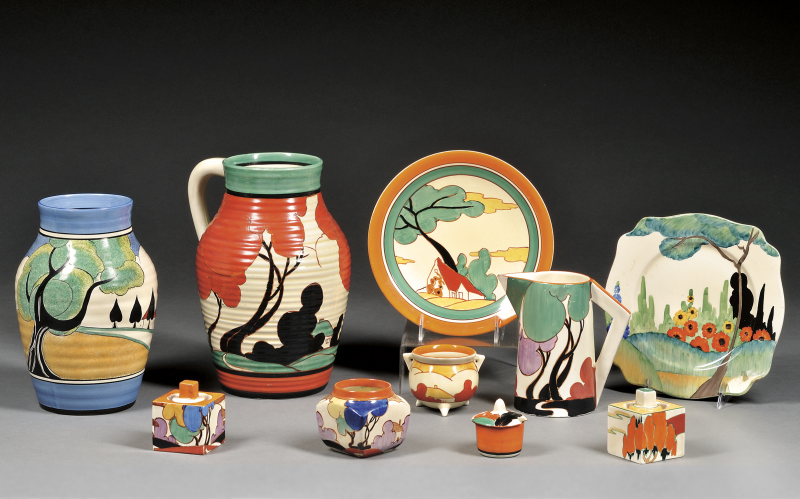 An icon of the Art Deco era, Clarice Cliff was a 13-year-old apprentice pottery enameller who grew to become a one-woman tour-de-force in British ceramics. Employed by A.J. Wilkinson and later, Newport Pottery, Cliff seemingly single-handedly brought the industry into the modern age with her bold pottery designs that featured bright colors, free-flow landscapes, abstract and geometric patterns, and oddly modern shapes. These elements made her wares extremely popular during the 1920s and 30s, and collectors still find them appealing now.

I love Cliff’s designs because they’re not overly formal, fancy, or staid. These thoroughly modern wares are refreshingly cheerful, playful and fun – they don’t take themselves too seriously. That makes them a natural fit with contemporary décor and a laid-back lifestyle.

Clarice Cliff’s rule over the British pottery world ended with the onset of World War II in 1939, when wartime regulations restricted pottery manufacturers to producing only plain white pottery, but her reign of color and shape lives on today in collecting circles. You’ll find examples online, in museums, in antique shops, at auction, and if you’re lucky, even at an occasional flea market. If you’re interested in Clarice Cliff, consider setting up a Skinner Lot Alert to inform you when items by this artist come up for auction.

A major collection of Clarice Cliff pottery sold very well at the Skinner June 2011 20th Century Design auction. The interest in this collection was worldwide, with strong bidding coming from the UK, Australia, New Zealand, and South Africa. Lot 160, a set of ten items decorated in various patterns including May Avenue, Red Roofs and Poplar, and Solitude, sold for $26,070.