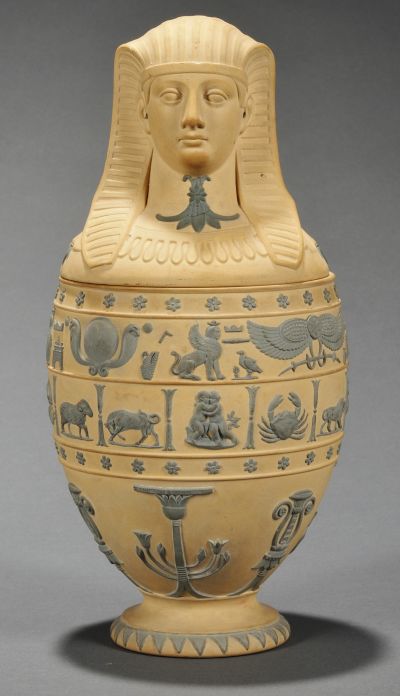 Wedgwood comes in a variety of designs, colors, and bodies and has been produced over a span of 250 years. I have specialized in the sale of Wedgwood for a small portion of that time, “only” four decades. And for the past 22 years, I have sold more Wedgwood at auction than every other auctioneer combined. I belong to and have lectured on Wedgwood at many of the Wedgwood Societies throughout the US and the UK, as well as numerous other ceramic study groups. So I have a pretty good overview on what’s hot and what not in Wedgwood collecting.

The 18th century wares including jasperware, black basalt, caneware, rosso antico and creamware have always been the mainstay of the earlier collectors of Wedgwood wares. Many of these wares are the more expensive items preferred by more advanced collectors.  Some even draw the line at collecting the 18th century only.

Unfortunately for Wedgwood, not much happened creatively in the first half of the 19th century, but by the end of the century, Wedgwood wares got much more interesting. A new generation of collectors began to take notice in the 1980s of what I call the second half of Wedgwood’s production, post 1850.

At this time, Wedgwood introduced factory wares “out of the box” and brought on numerous freelance artists and designers with new ideas. Emile Lessore, Thomas Allen, Alfred Powell, Arnold Machin, John Skeaping, Keith Murray, Eric Ravilious and Norman Wilson are some of the big names that come to mind. Wares like majolica and fairyland lustre introduced bold colors and fanciful designs.

The newer collectors not only collect the brand name “Wedgwood” but also many of these specific artists. Wedgwood, unlike many manufactured wares, wasn’t simply produced at the factory but now had a personality attached to it that the earlier wares did not have. Collectors today use the artist in the first tense, not the Wedgwood name: “That’s a great piece of Lessore” or “I love the color of that Keith Murray vase.”

The personality of many Wedgwood collectors has changed, and although the 18th century is still much revered, it appears that much respect is now given to these “later” wares, all very competitive in the marketplace. Wedgwood has come a long way from classical figures.

41 thoughts on “Wedgwood Auctions and Collections are Alive and Well”