Naval battle scenes have been popular subjects in American art for centuries, and actions during the War of 1812 inspired a great number of such works. For obvious patriotic reasons, in nearly all cases the scenes depict American victories. However, on occasion a remarkable work surfaces that captures the drama of naval combat from another perspective. A wonderful overmantel painting on wood (Lot 224) in the February 27 American Furniture & Decorative Arts auction records the battle between an American and a British frigate after the former slipped past a British naval blockade. 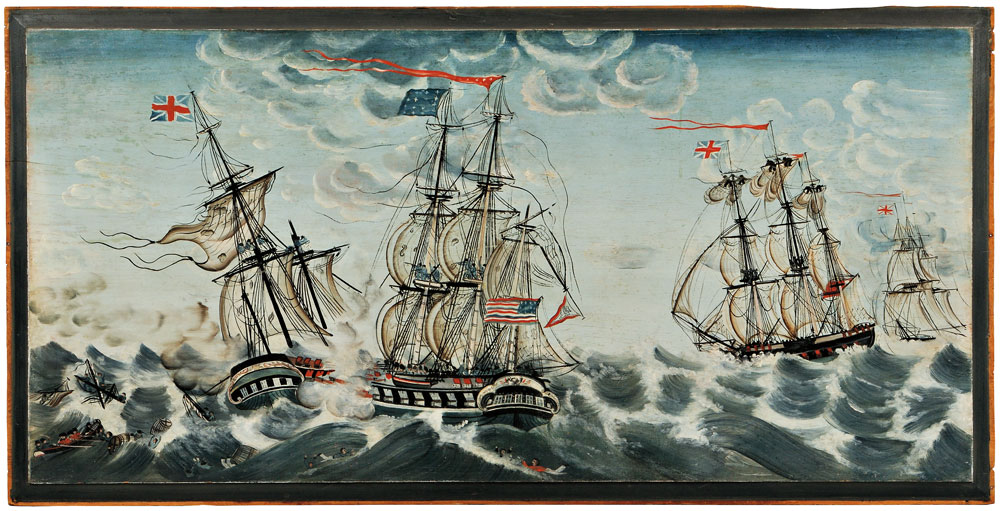 A blockade, in military terms, is something that prevents troops or supplies from entering or leaving a place. During the Napoleonic War in Europe, Britain sought to block the exportation of American goods to France by using its naval forces to search and seize goods from American ships destined for Europe that would help Napoleon and his military forces. Eventually the British navy succeeded in blockading nearly all American ports, nearly halting America’s international trade and severely damaging the United States’ economy.

During the War of 1812, several United States warships were blockaded in New York harbor and were unable to leave due to the strong British naval forces guarding it. On January 13, 1815 a blizzard blew the British ships guarding the harbor off their stations, giving the American fleet a chance to escape. The frigate U.S.S. President, commanded by Stephen Decatur, attempted to leave the harbor. Unfortunately, disaster struck almost immediately: U.S.S. President ran aground on a sandbar and remained stuck for almost two hours. Heavy seas and strong winds damaged the ship, twisting and stripping copper plating from its hull and cracking its masts. Once the ship was finally freed from the sandbar, it headed out to sea, as the storm made it impossible for it to head back into port. Decatur steered the ship eastward along the Long Island shore before heading southeast towards the open ocean.

Once the storm subsided, the British fleet, realizing that some of the American ships might have left the harbor, began searching the seas outside New York. On the morning of January 14 they sighted U.S.S. President.  Decatur immediately tried to outrun the British, but the damage his ship had sustained during the storm slowed his pace. The British fleet pursued and overtook the ship, and by late afternoon the British frigate H.M.S. Endymion and U.S.S. President were exchanging cannon fire. The storm-damaged American vessel proved difficult to maneuver and by 8:00 that evening hoisted a light in her rigging signaling that she was preparing to surrender. But seeing that Endymion was working at making repairs, Decatur attempted to escape and by 8:30 was sailing away. Shortly after 9:00 two British ships caught up with U.S.S. President and fired two broadsides at the ship, after which Decatur once again made motions to surrender. In the aftermath of the battle, the British ships and U.S.S. President sailed to Bermuda. During the voyage a violent storm caused additional damage to the ships with all suffering broken masts.

This defeat and capture, rather than victory, of an American ship is an unlikely event to be immortalized in such a dramatic American artwork. The painting was originally mounted in a home constructed in 1792 in Haddam Neck, Connecticut, and as far as is known the occupants of the home did not have any pro-British sentiments. After the action, details of the dramatic battle were published in many American newspapers. Perhaps it was the heroic efforts of Stephen Decatur in breaking out of New York Harbor after years of blockade that inspired the unknown artist to create this image, or perhaps the home’s owner had a personal connection with the event. Whatever the case, the painting is epic in size and drama and is a remarkable survivor from a very tumultuous period of America’s past.